Old Bestseller: The City of Lilies, by Anthony Pryde and R. K. Weekes

Old Bestseller: The City of Lilies, by Anthony Pryde and R. K. Weekes

I doubt this was actually a bestseller, but it's certainly a piece of popular fiction from the first half of the 20th Century -- so very much in this blog's original purview. 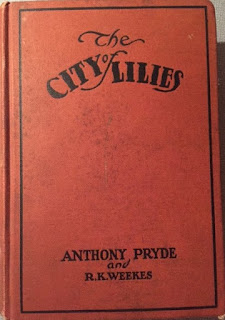 Anthony Pryde was a pseudonym for Agnes Russell Weekes (1880-1940). R. K. (Rose Kirkpatrick) Weekes (1874-1956) was her sister. Almost nothing about the two is readily findable, at least with my search skills. (Denny Lien helped track down the bare details I have.) They appear to have been English. At first Agnes seems perhaps to have been the primary author, especially if Anthony Pryde was her pseudonym alone -- some books are attributed to that name only, and at least in the case of The City of Lilies, the byline for R. K. Weekes is given in smaller print. Later in their career the Pryde name was sometimes not used, instead Agnes used the form of her name A. R. Weekes, and they often published as by "A. R. and R. K. Weekes", suggesting that the collaboration was equal by that time.

The earliest Anthony Pryde novel I can find is Marqueray's Duel, from 1920, when Agnes was 40, and the latest dates to 1931. Novels as by A. R. and R. K. Weekes continue until Alda Abducted in 1942. It appears, then, that the novels stopped when Agnes died. (To be sure, Rose was 68 in 1942 and may have been ready to retire anyway.) They published very regularly for some time, at least a couple of dozen novels with titles like The Purple Pearl, An Ordeal of Honor, The Secret Room, and The Emerald Necklace. There is an earlier novel credited to R. K. Weekes alone, Convict B14 (1920), and one dating as far back as 1904 credited to A. R. Weekes alone, Yarbrough the Premier. I also found a short story by Agnes Russell Weekes in Harper's Magazine in 1904, so it seems she was a publishing writer at that time. I'm not sure why there's an apparent gap between those publications and the novels beginning in 1920. There was also a Shakespearean scholar called A. R. Weekes in the same time period -- in this case I suspect that wasn't Agnes, though I suppose I could be wrong. The other mentions I saw were a dismissive review in Harper's, and an apparently vaguely positive note in Time, of Anthony Pryde novels. Finally, a blog that may be very much up my alley, Furrowed Middlebrow, briefly mentions the Weekes sisters among a list of Edwardian women writers and adds a couple of novels from between 1904 and 1920: Faith Unfaithful (1914) by Agnes, and The Laurensons (1917) by Rose; and implies that Rose's list of solo novels was longer than I have suggested.

The City of Lilies is from 1923, published by Robert M. McBride & Company. Handwriting on the inside front cover says "Library of Mr. and Mrs. Jerry McGowan". It may be a First Edition. There was a later printing from A. L. Burt.

The novel is quite frankly an example of a Ruritanian novel (and indeed the Time mention of it emphasized that aspect). It's set in Neuberg, which seems to be located roughly where Lichtenstein is, and to be about the same size. Neuberg's ruling Prince is Heinrich, a cruel tyrant with a tortured artistic side: apparently he's a great architect, but his upbringing, by his harsh grandfather, has made him a terrible ruler. His most trusted adviser is Rupert Hautrive, an Englishman who wandered to Neuberg partly in search of his beloved older brother, who, it turns out, died in prison, a victim of Heinrich's grandfather. Heinrich has a beautiful young wife who hates him, but who he loves to distraction. And he has an implacable enemy, the lowborn Valentin Muller, leader of the revolutionary group called The League.

The novel opens with a masked ball, at which it soon appears that Valentin is an unexpected guest. He escapes, but not before getting the attention of a beautiful dancer from Paris, Mercedes. The upshot of all this is that Heinrich decides to punish the loyal Colonel von Ritzing, who had not attended the ball and whose pass had been appropriated by Valentin. Von Ritzing is very popular, and very upright, and his execution will outrage the people. Will the League intervene? Or will Valentin sacrifice von Ritzing to the greater cause?

Other subplots intertwine -- Mercedes joining the league and falling for Valentin; the mystery of Rupert Hautrive's parentage; the true love of Margaret, Heinrich's Princess; the cynical French police chief Suchet and his machinations. It's clear from the start that Heinrich's rule is doomed, and indeed that he realizes this and at some level doesn't mind -- he's an interesting if not quite believable character, fully aware of his faults but unwilling to change, truly in love with the wife he has abused sufficiently so that she hates him; truly brilliant when he cares to be. There is another mystery, easily enough guessed by any halfway alert reader, concerning the Royal Family of Neuberg.

It all bounces along nicely enough. It's popular fiction of its time, and of its very particular subgenre, the Ruritanian novel, and its overt debt to Anthony Hope's Prisoner of Zenda is, I think, something the authors would have cheerfully acknowledged. It's a bit brokenbacked -- the climax comes a tad too early, and is a bit of an anticlimax, actually, with a slightly overextended denouement. But really it's fun stuff, nothing all that great, sure, but enjoyable.