I don't think Angela Thirkell was ever really a bestseller but her books, it appears, sold steadily over the years, in a career that last from about 1930 to her death in 1961. She still has a strong coterie of fans -- indeed, the Angela Thirkell Society will have a convention in Kansas City this year just the week before the World Science Fiction Convention.

She was born in 1890, the daughter of John Mackail and Margaret Burne-Jones, thus Rudyard Kipling's first cousin once removed, and Edward Burne-Jones' granddaughter. J. M. Barrie was her godfather. Her brother Dennis was also a novelist. Angela Mackail married James McInnes in 1911, and had three children with him befor divorcing him. (He was bisexual, and an adulterer.) She married again in 1918, to George Thirkell, a Tasmanian man, and the couple moved to Australia. But Thirkell hated it there, and left Thirkell in 1929, taking her son Lance and returning to England. Perhaps because she need the money, she began to write (she had done some journalism in Australia), and her first novel appeared in 1931. Some 40 books followed until her death (the last completed by another hand). The great majority of her books were set, curiously, in Barsetshire, the fictional county invented by the 19th Century novelist Anthony Trollope. Thirkell's books were contemporary, imagining Barsetshire as it would have been in the '30s-'50s. Many of her books, especially the later ones, were fairly conventional romances in plot structure. But as far as I can tell, her virtues were never plot, but instead a cheerfully satirical view of her characters and their milieu, and a great ear for dialogue. 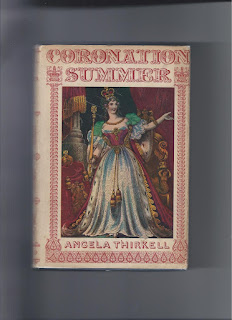 The book I chose (partly simply because it was the book I encountered) is not quite characteristic of her work. Coronation Summer is an historical novel, set in 1838 when Queen Victoria was crowned. It was first published by the Oxford University Press, presumably reflecting the novel's rather educational aspect. It was reprinted in 1953 by her usual publishers, Hamish Hamilton in England and Alfred A. Knopf in the US. (My copy is the latter.) 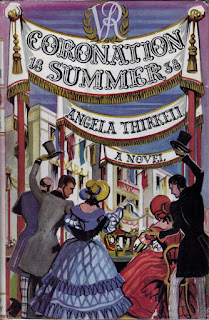 Part of the book is sort of a travelogue and description of London life in 1838. Period illustrations are included: things like reprints of opera tickets. And there are numerous events: the Coronation, of course, but also a canoe race, a ceremony at Eton called Eton Montem, an opera, dress buying, and the occasional party.

There's a plot, too, if a fairly thin one. The story is presented as Mrs. Fan Darnley, as of 1840, writing up her memories of her summer in London the year of the Coronation, 1838. It opens with her and her soon-to-be sister-in-law, Emily Dacre, opening a book intended for Fanny's husband Henry Darnley. The book is Ingoldsby's Legends, and they wonder if the author, Thomas Ingoldsby, is the same Tom Ingoldsby whom they met in London. (Ingoldsby's Legends is a real book, once quite famous, though there was no Tom Ingoldsby -- that was a pseudonym.) Fan decides to write about her and Emily's visit to London.

In London they meet a couple of eligible men -- Mr. Vavasour, a rather pretentious author; and Henry (Hal) Darnley, a friend of Fan's brother Ned from his time at Cambridge. Hal and Ned are in London partly to prepare for a race. As we know from the beginning of the book that Fan's married name is Darnley, there's not a ton of suspense (not that there would have been -- in the way of romance novels it's pretty obvious from the start that Mr. Vavasour is not a suitable candidate). Meanwhile, Emily and Ned fall quickly in love. The two young women spend the next few weeks seeing what they can in London, while Fan's father, Mr. Harcourt, risks his family's solvency by gambling. Fan shows some interest in Mr. Vavasour, but really from the start she clearly prefers Hal Darnley. They meet a number of famous people, including the novelist Benjamin Disraeli (well, he's a politician too!) and the controversial poetess Caroline Norton, of who Fan cannot approve as she has left her husband. (This was a scandalous case in 1830s London, eventually leading, through Norton's efforts, to improvements in the rights of women in cases of divorce, especially as to custody of their children. Her husband was a bad person, abusive and financially reckless, so she was widely sympathized with.) Anyway, things come to a head at the end with Hal Darnley apparently convinced that Fan prefers Mr. Vavasour, and with Mr. Harcourt ruined (and Mrs. Harcourt, back home, on her deathbed). But all is resolved happily (largely because Hal Darnley is a very rich man).

In reality, then, the plot is of minor interest, and the sort of travelogue aspect is, while somewhat interest, not really that fascinating. But the book is still great fun -- why? The dialogue, and the portrayal of the characters. It's quite funny throughout. Mr. Harcourt (Fan and Ned's father) is very amusing: a blowhard of sorts, generous to a fault while pretending to be close with his money, a reflexive and unthinking Tory who hates Frenchmen especially. Fan is a bit of a prig and thus is always disapproving of Emily, who is slightly more relaxed, and Fan's exasperation with Emily is delightfully portrayed.

Coronation Summer is a short novel, and a slight one, but it's really rather delightful in sum. I'm not sure I'll get around to any of Thirkell's Barsetshire novels, but I'm quite sure I'd enjoy them if I tried them.
Posted by Rich Horton at 7:49 PM