A special for Patti Abbott's Friday's Forgotten Books, which is focusing on Rex Stout this week. That said, while I doubt this particular book was a bestseller, Stout's Nero Wolfe books sold very well for a long time, and afforded him a handsome income. 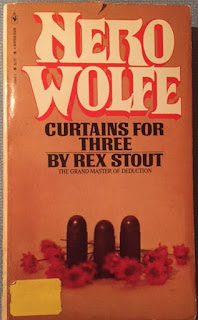 I have a certain tendency to read mystery writers in bunches -- that is, as a teen I binged on Agatha Christie, and since then I've done the same -- read huge swathes of their oeuvre over a period of month or a couple years -- with the likes of Charlotte MacLeod, Robert Barnard, Ellis Peters, Anne Perry, Peter Lovesey, John D. MacDonald, and Georges Simenon. And also Rex Stout, sometime in the '80s, when I read dozens of his Nero Wolfe novels, mostly in the Bantam paperbacks that were being reissued at that time.

So I figured I'd reread one of the old Nero Wolfe books I had. I chose Curtains for Three, from 1950. Like many of Stout's Nero Wolfe books it's an omnibus of three novellas, which is one reason I picked it: interest in the short fiction market for mysteries. These three novellas were published in the American Magazine, one each in 1948, 1949, and 1950. I suspected they were marketed as "Complete Novels" in the magazine issues, and I was right, as the covers here show (or would show, if the reproduction was better!). They are all of similar length, in the neighborhood of 25,000 words. 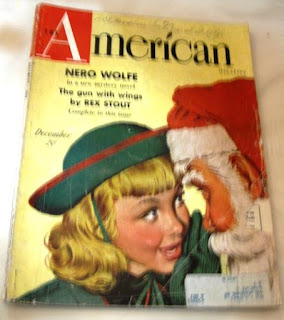 Rex Stout (1886-1975) was born in Indiana, grew up in Kansas, and joined the Navy after a brief spell at the University of Kansas. He served as a Warrant Officer on President Theodore Roosevelt's yacht. He left the Navy and went into banking, apparently inventing a school banking system that was very widely implemented. He published a variety of genre short stories in the that period. By 1927 he had made enough money to retire and turn to writing, at first producing three literary novels that were well received but didn't sell. In 1934 he published the first Nero Wolfe novel, Fer-de-Lance (an abridged version appeared in the American Magazine), and from then on concentrated on mysteries, introducing a couple of other detectives (such as Tecumseh Fox and Dol Bonner, who appeared in one book of her own and later in some Nero Wolfe books), but eventually sticking with Wolfe. He was active politically, mostly for leftish causes, including time spent in a leadership position for the ACLU; despite this, he was fiercely anti-Communist and late in his life supported US involvement in Vietnam. 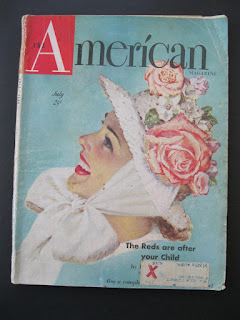 The Nero Wolfe books are one of those long-lasting mystery series in which the detective never ages even as the novels are set at the time of writing. (Simenon's Maigret novels are like this as well.) I always thought that worked well until perhaps the '60s, when maybe the present day setting didn't seem to fit Nero Wolfe and the narrator, Wolfe's assistant Archie Goodwin, quite as well.

To the stories. The three stories in Curtains for Three are:

The book was first published by Viking in December 1950. They all share a similar structure: a murder mystery is presented, with about 6 obvious suspects, and after interviewing them all, with Archie possibly sent on an errand or two, and with Inspector Cramer of the NYPD either accepting Wolfe's help or fulminating against his involvement, Wolfe determines the solution (often turning on a tricksy minor detail). Usually he reveals it with all involved present in his office. (Wolfe famously almost never leaves his brownstone, and has very fixed hours devoted either to work, food, or his orchids.)

In "The Gun With Wings", two lovers want to hire Wolfe to prove that each of them is innocent of murder. It seems that the woman's husband, a famous tenor, has just been shot. Naturally, the wife is a suspect, and so is her lover. And though both claim to be sure the other didn't do it, they want Wolfe to prove it so there is no lingering doubt. There are other candidates, such as a rival whose daughter claimed to have been seduced by the dead man, and that daughter as well, and a couple more. Wolfe's main concern is to find out how the title gun "winged" itself from one place to another ...

In "Bullet for One", a famous industrial designer has been murdered while walking his horse in Central Park. Wolfe is hired by a group of the suspects in the murder with a commission -- to prove that another man, the victim's top salesman, is guilty. Wolfe of course, refuses, and promises only to find who is actually guilty. The other suspects are a rival designer, the victim's daughter, an investor, an employee who was just fired, and the designer's groom. Part of the intrigue here, as usual, is Archie Goodwin's preference for one of the women involved over the other, and the perhaps related decision by Wolfe to send Archie on errands he considers unimportant -- but maybe they're not?

Finally, in "Disguise for Murder", the murder is actually committed in Wolfe's office. He is showing off his orchids, unwillingly, to a Garden Club. Taking a break by hiding in the office, Archie is confronted by a young woman who admits she's a crook, and wants to get out of the business, but she's been recognized at the orchid showing, and fears she might be in danger. When, shortly later, she is found strangled in the office, Wolfe is understandably motivated to find the killer, who must be another of the guests. A complication is the high-handed way the police treat the scene of the crime. This also features some action for Archie, and some real danger. And it turns on a fairly clever trivial point.

In all of these stories, as in most of the Nero Wolfe mysteries, the characters of Goodwin and Wolfe, as well as their various assistants such as Fritz the cook, and Saul Panzer; as well as foils like Inspector Cramer; are of greater interest than the mysteries. (This is hardly uncommon in these ongoing series.) They are good fun -- in the case of these stories minor fun, though the best Wolfe novels are more involved and of greater lasting interest.
Posted by Rich Horton at 7:48 PM