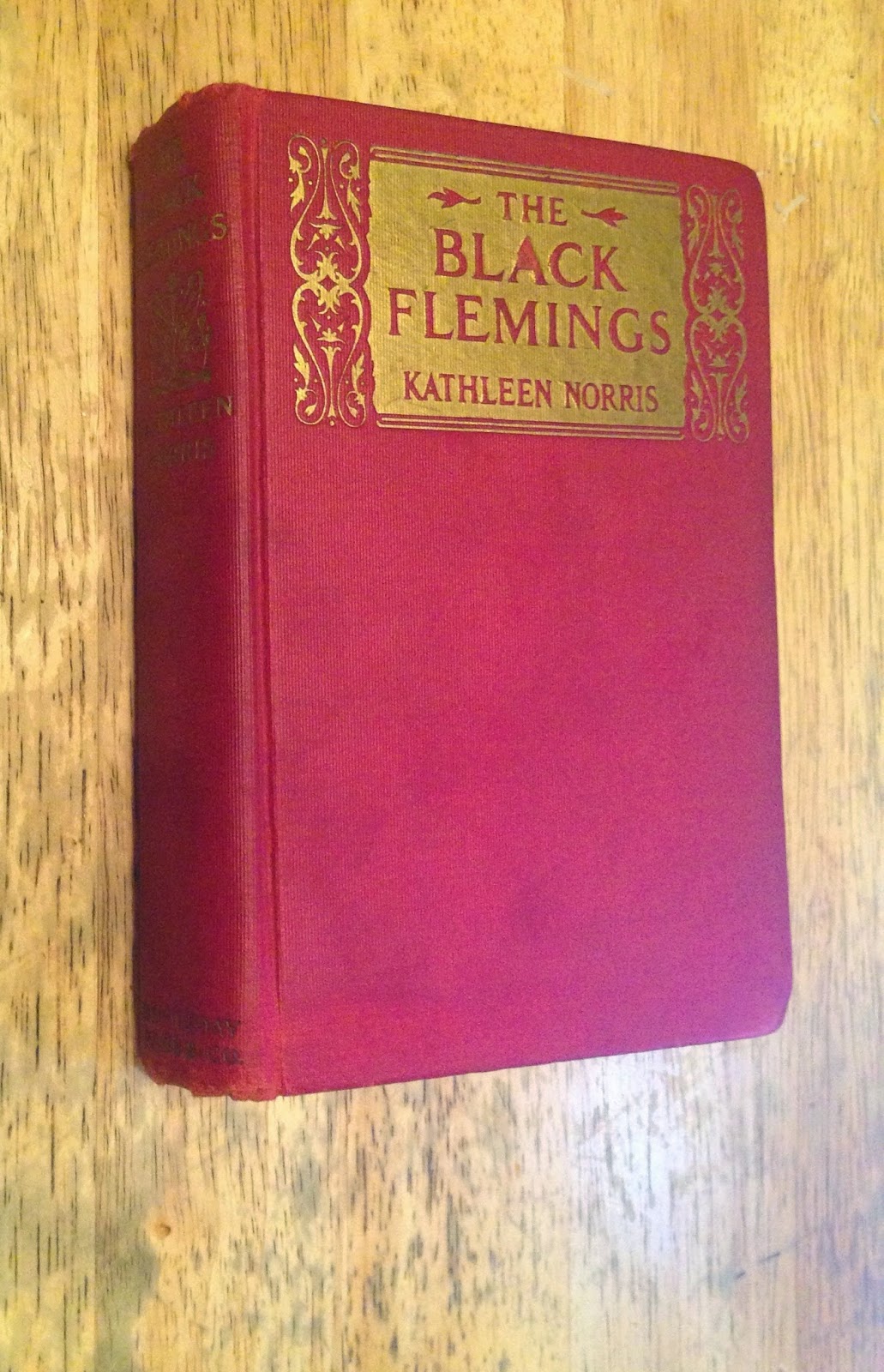 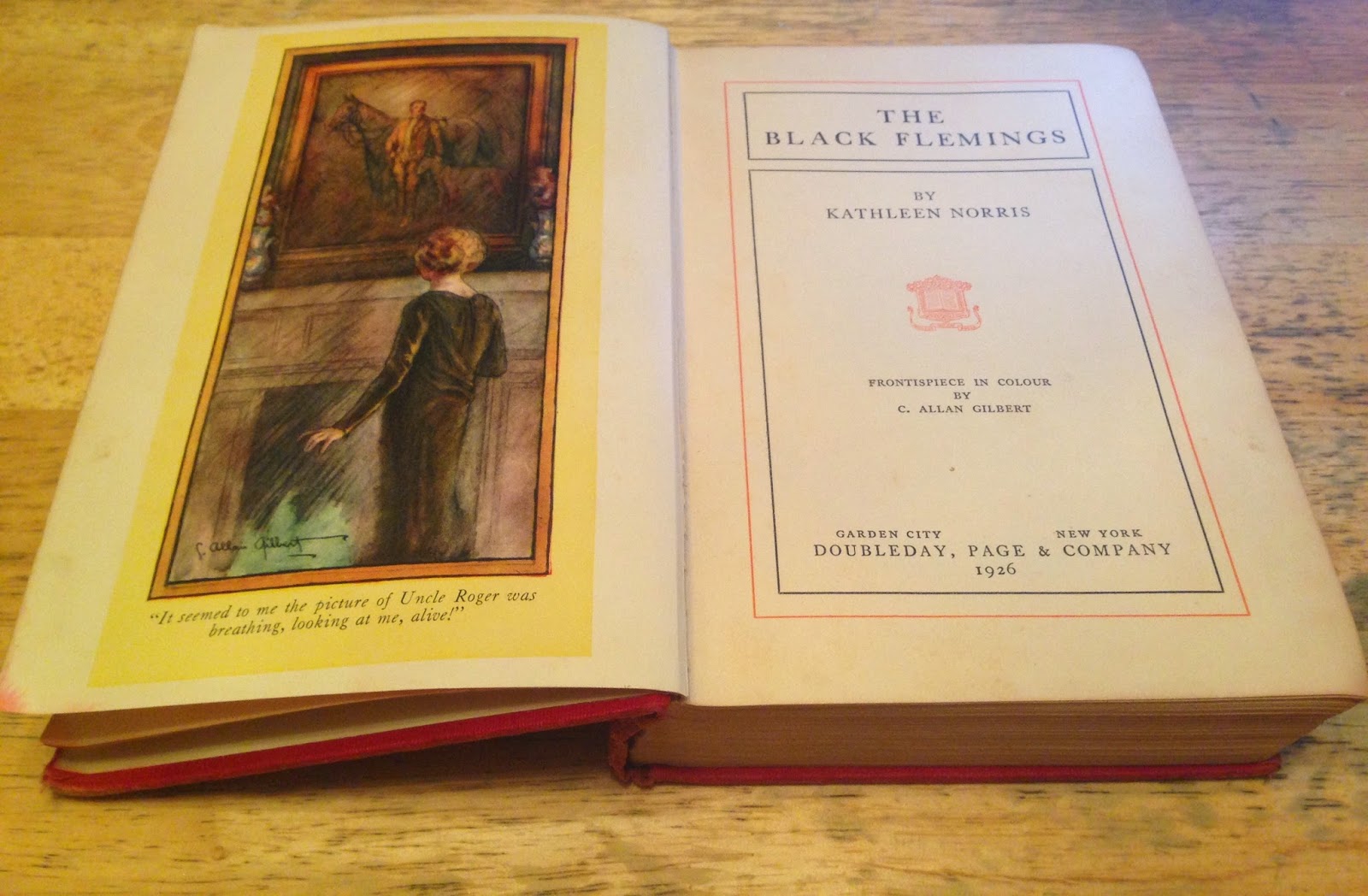 The Black Flemings, by Kathleen Norris

Here again is a book of the sort I consider central to this series ... a popular book from decades ago by a supremely popular writer who is now mostly forgotten.

Kathleen Thompson was born in San Francisco, California, in 1880. Her parents both died in 1899, and she worked in a hardware store to support her siblings, and also began to publish occasional short stories. In 1906 she became the society columnist for the San Franscico Call. She met writer Charles Gilman Norris in the course of that job, and married him in 1909, after he had moved to New York to edit the American Magazine. They had one living  child (a pair of twins died in childbirth or shortly after). The Norrises returned to California in 1919. Kathleen Norris died in 1966.

Norris' first novel, Mother (1911), was expanded from a story she wrote for the American. It became a bestseller and was praised by the likes of President Theodore Roosevelt. She began publishing novels regularly, by some accounts publishing as many as 93. Her novels were consistently bestsellers, and two appear on Publishers' Weekly's lists of the Top Ten bestsellers by year: The Heart of Rachael in 1916, and Harriet and the Piper in 1920. She is often called the bestselling woman novelist of the 20th Century -- I'm not sure how this was determined, though. For example, Mary Roberts Rinehart, a very near contemporary of Norris's, and approximately as prolific, appeared on the PW lists of Top Ten Bestsellers of the year 12 times, for 10 different books -- one would think she sold as many or more books as Norris. Norris continued to publish novels at least into the 1950s.

Norris was related by marriage to a number of well-known writers. Her husband was a well-received novelist in his day, most especially for Salt, though he is all but forgotten today. Her brother-in-law, Frank Norris, was much more crtically successful than either of them, and is still remembered, especially for McTeague and The Octopus. Kathleen Norris' sister married poet William Rose Benét, who won the Pulitzer Prize in Poetry in 1942. Though William Rose Benét is hardly read any more, his brother Stephen Vincent Benét, who also won the Pulitzer Prize for Poetry, is still very well-known. (The Benét's are the only pair of siblings each to have won a Poetry Pulitzer, though cousins Amy Lowell and Robert Lowell also both won the Prize.)

Kathleen Norris was critically regarded as overly sentimental, partly because her books exalted the roles of wife and mother; and no doubt partly because her bestseller plots do seem to have tended towards the sentimental. He relatively low critical regard probably also stems from her prolificity, and too from her financial success. Her husband's work was better received at the time, though she seems to have sold better. Likely her place as a writer of overtly "women's fiction" contributed to her reception as well. It is my sense that she is a writer, unlike many of the writers I've covered in this series (though not all) who may well be worthy of a modest revival. She was a devout Catholic, and an ardent opponent of birth control, though on other political questions, especially having to do with women's rights, her views were more liberal.

The Black Flemings (1926) does not seem to be one of her better known books. (As far as I can tell, her best-received novels, besides the bestsellers already mentioned, include Saturday's Child (1914), Josselyn's Wife (1918), and Certain People of Importance (1922).) It is set in Massachusetts, on the coast, almost entirely in a gloomy old mansion called Wastewater. Wastewater is the home of the Fleming family, but at the time of the action, there is no real head of the family. David Fleming, a distant cousin who was raised by the late Roger Fleming after his widowed mother married him, acts as a financial advisor of sorts. He is level-headed and not terribly ambitious, and spends much of his time painting. He has a sort of intention to marry Roger's niece, Sylvia, who is beautiful and intelligent and "superior". Roger's son (and David's half-brother), Tom, ran away to sea at 14, and had not been heard from since -- he is assumed to be dead, making Sylvia the heir. The mistress of Wastewater is Aunt Flora, another distant cousin, who had twice been engaged to marry Roger, only to be thrown over, first for David's mother and then for Cecily Kent, a frail 17 year old who somehow attracted Roger's attention only to die after only a few unhappy years of marriage. Flora had married Roger's rackety brother Will, who later died, though not before fathering Sylvia.

Into this tangle returns Gabrielle Charpentier, the daughter of Aunt Lily, Flora's younger sister, who went mad and died, partly because her husband, Mr. Charpentier, abandoned her even before Gabrielle's birth. Gabrielle, or Gay, is a beautiful young woman, blond as opposed to the usual brunette of the "Black Flemings", and convent educated. The problem is what to do with her ... she has no money, and little in the way of education. But, we soon realize, she is the true heroine, and her steadfastness, honesty, and good instincts are seen (by the writer and (eventually) the reader) as greater virtues than Sylvia's "superiority" (though it should not be said that Sylvia is at all a bad person). To the reader's non-surprise, she falls for David -- and soon David for her, though he doesn't quite realize it.

The novel develops somewhat slowly (though it remains interesting), and unveils its secrets (which are many) at a rather unconventional pace. It turns mainly on the questions of Gabrielle's birth, about which there are a series of revelations, as well as on such things as the identity of the mysterious old woman whom Gay sometimes sees but whom everyone else denies the existence of; and too of course on the true fate of David's half-brother Tom, who would be the heir to Wastewater and to the Fleming fortune if he were ever to be found; and also on the real history of Roger's adventures with women. So in fact there is a distinct touch of the Gothic to the whole thing, though it's not a full-blown Gothic.

The wrapping up is not really much of a surprise, though the specifics of the working out aren't necessarily exactly as expected. I will say Sylvia's eventual fate seemed a bit tacked-on to me. It really reads quite nicely -- Norris was a writer of some skill. She also worked hard at delineated her characters -- doing, to be sure, a lot of telling and not showing. And she did not get deep into their inner life, but at a more superficial level she does good work. I suppose I would say it is quite skilled popular fiction characterization, if not being great literary characterization. Her depiction of Sylvia, in particular, is quite acute, and I believed it utterly. Gay, on the other hand, though a very engaging protagonist, is rather too much the paragon to convince. The book, as I suggested, moves a bit slowly, but it still held my attention. And I will say that I have some interest in checking out something more by Norris (though I probably don't have the TIME to do so!)
Posted by Rich Horton at 8:08 PM