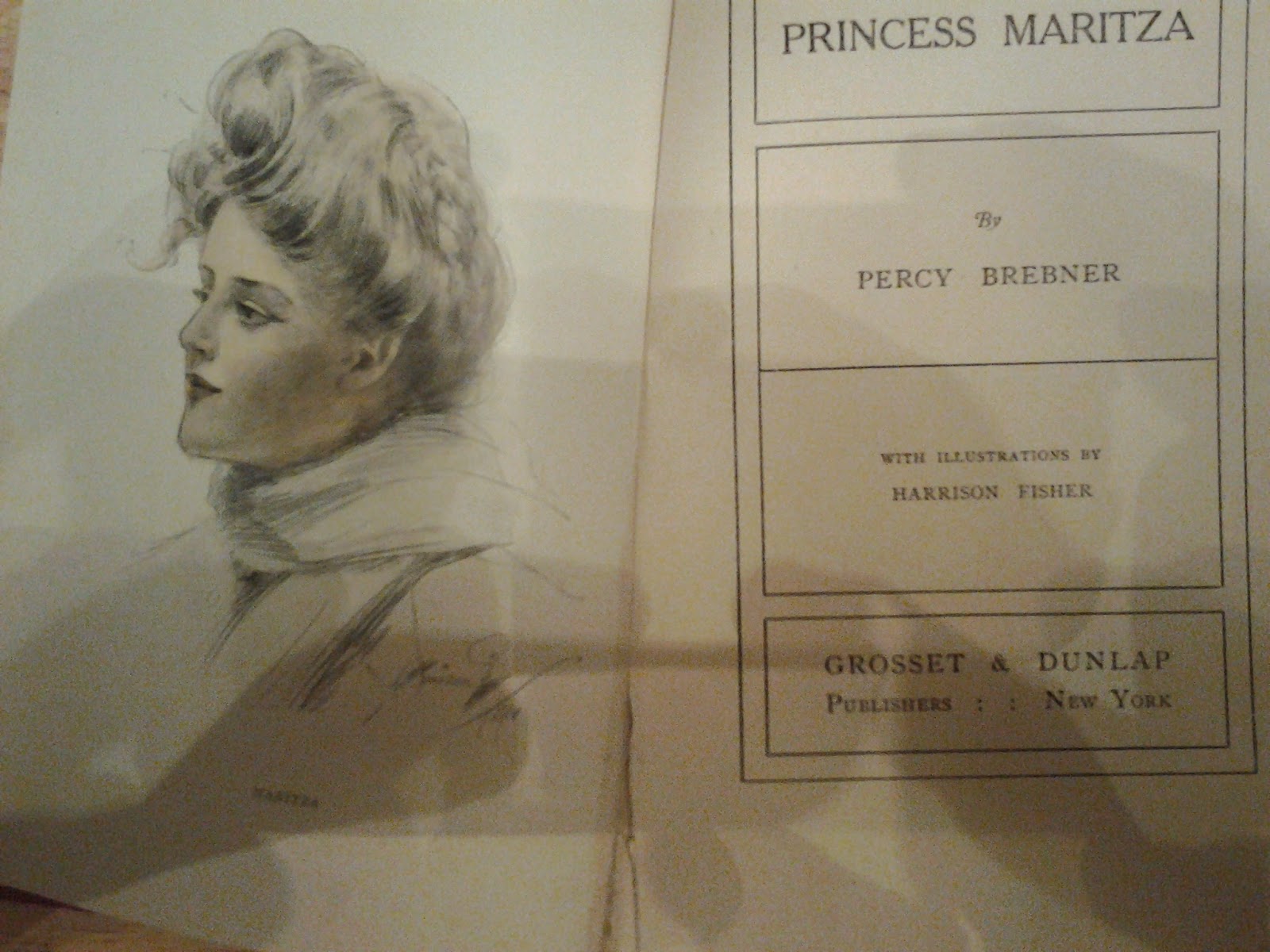 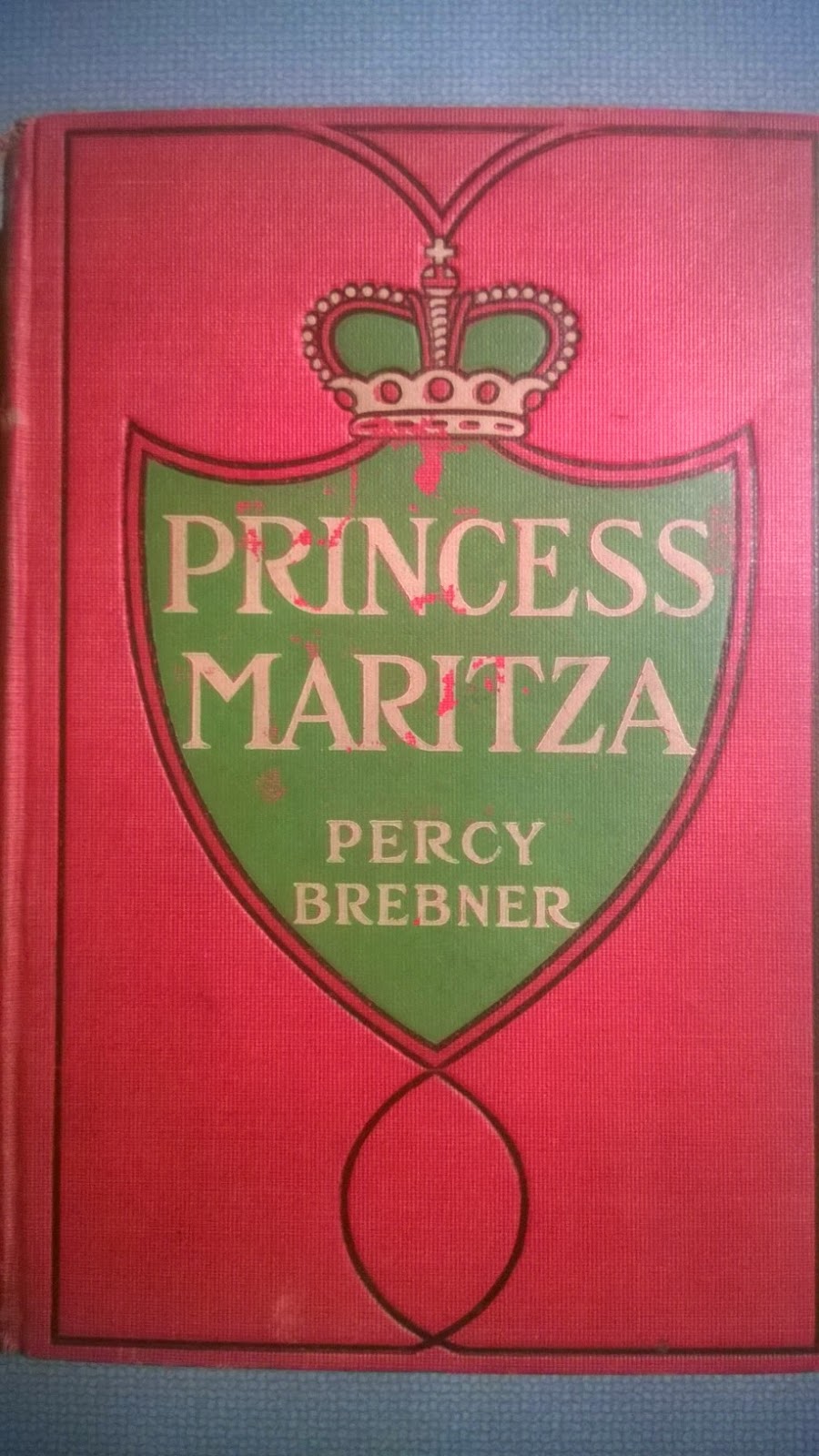 Here's a pretty obscure book, I'd say -- at least to me. I had never heard of the book or the author until I saw it in an antique store just off Highway 55 40 or so miles north of St. Louis. But it was clear that it was a Ruritanian story, and I have a bit of a weakness for that subgenre.

Once again, the best online source of informaton on this non-SF writer was the Science Fiction Encylopedia. Percy James Brebner (1864-1922) was an Englishman. He wrote mostly romantic adventures, at least a dozen novels. Some of his books were written as by "Christian Lys". The SFE is interested in five of his novels that had (mostly somewhat slight) fantastical elements, particularly The Fortress of Yadasara: A Narrative Prepared from the Manuscript of Clinton Verrall, Esq. (in a magazine in 1898 as by Lys, in book form as The Knight of the Silver Star in 1907 as by Brebner) and The Mystery of Ladyplace (1900).

Princess Maritza was first published by T. J. McBride and Son in 1906 according to the copyright notice in my edition, which is a Grosset and Dunlap reprint. (The SFE gives 1907 by Cassell -- perhaps that was the first UK edition?) My edition has two rather nice illustrations by Harrison Fisher, a fairly well-known illustrator of that time, noted in particular for his depictions of women.

As I noted, it's a Ruritanian story, indeed nearly as pure an example as might be found this side of the original, Anthony Hope's The Prisoner of Zenda. Of course it is not nearly as good as that book, but I did rather enjoy it. It opens with the disgraced soldier Desmond Ellery wandering the downs near a friend's house, when he encounters a beautiful 18 year old girl, who tells him that she is playing hooky from the local finishing school ... and also that she is a Princess, though her family's throne, in the apparently Balkan country of Wallaria, has been usurped. Her ambition, though she is but a female, is to return and retake her throne, despite the fact that the Great Powers all oppose this, feeling that Wallaria is best kept in its current state for balance of power reasons. And indeed Desmond's friend Sir Charles Martin informs him later that Princess Maritza's family were terrible rulers.

But Desmond feels there is nothing left for him in England, after he was unfairly dismissed from his military post due to a false story of cheating at cards. So he heads to Sturatzberg, capital of Wallaria, and offers his services to the King. (A curious move, this, as if he was so intrigued by Princess Maritza, why would he swear to serve her enemies?) After a couple of years of no action, he is summoned by a mysterious Frenchman to a meeting with a woman who turns out to be the Queen -- and it seems she will soon have a mission for him, to travel to the secret headquarters of the brigand Vasilici and recruit him to her mission -- which is to rise up and throw out the foreigners who have dominated Wallaria through the weak King. Chief among these seems to be the British Ambassador, Lord Cloverton.

Desmond, in the interim, spends time at court, and becomes associated with the beautiful Countess Frina Mavrodin. Lord Cloverton recognizes Desmond's worth, but is concerned that he will be a problem. Desmond is also kidnapped and brought to a meeting with a masked woman, who warns him against involvement with the Frenchman's schemes ... And there are rumors that Princess Maritza has run away from her English school and returned to Sturatzberg.

Things continue in this vein. Desmond Ellery, torn between his promised service to the Queen and his obsession with the memory of Princess Maritza, dallies with Frina Mavrodin for a while (not realizing her true loyalties) before finally being sent on his mission to Vasilici. He gains a new companion on this trip, a beardless youth who is a brilliant marksman. He learns some of the truth about the scheming Frenchman. There is a duel, and noble men and women are tragically placed on opposite sides of the struggle, and there is a love triangle or quadrangle. Desmond and his loyal servant and the mysterious beardless youth (I defy anyone to guess his identity [grin]) are hopelessly trapped by the brigands in an abandoned castle. The city rises in rebellion ...

Brebner doesn't really miss a trick here. And it mostly works fairly well. It's all quite silly of course, and often implausible, and as with many novels published in this time frame, the shadow of World War I hangs heavily over all the fustian, for a present day reader, anyway. (That said, there is a vein of realpolitik in Brebner's treatment of the place of Wallaria in events of its time.) The ending is, within the constraints of its genre, somewhat believable. The characters are types, of course, but nicely done types -- Desmond is just dense enough to be almost human despite his near-perfection in other aspects; his servant Stephen is an OK comic foil; the Princess is likeable and brave and the tragic Countess is also admirable. The slimy French villain is perhaps a bit too stock and over the top; but what do you expect? The prose is efficient, a bit on the wordy side but not at the expense of readability. Certainly this is not a book that demands revival, but it's still a book I'm happy enough to have encountered.