Old Bestsellers: The Night Life of the Gods, by Thorne Smith 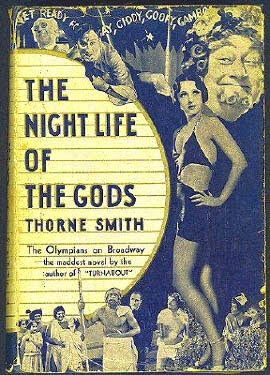 The Night Life of the Gods, by Thorne Smith

Thorne Smith of course remains fairly famous as the writer of two novels, Topper and Topper Takes a Trip, about a banker stuck in a boring marriage who is haunted by a funloving ghost couple. These books remain famous probably mostly because of a series of successful movies (starring Cary Grant, in the first film at least) and later a radio show and a TV series.

Smith was born James Thorne Smith, Jr., in 1892. He came from a Naval family, attended Dartmouth, and then spent some time in the Navy. His first couple of books consisted of comic sketches about Biltmore Oswald, a Naval recruit, that were originally written for a Navy magazine. His breakout books was Topper, in 1926. Besides Topper his most successful novels were The Stray Lamb (1929), and The Night Life of the Gods (1931). Smith died in 1934, as far as I can tell having essentially drunk himself to death -- his novels featured heavy drinking (even as, or perhaps because, they were set during Prohibition), and he apparently drank as prodigiously as his characters.

The Night Life of the Gods concerns Hunter Hawk, a successful bachelor inventor who has been forced to take in his sister, her useless husband, her husband's father, and their two children, the awful Alfred Junior and the rather nice Daphne. Hawk invents a petrification ray, which he uses to rather cruelly turn his relatives into stone (and back again, I should say). He wanders off into the countryside and meets a leprechaun, and the leprechaun's enchanting daughter Megaera, or Meg.

Meg falls immediately for Hawk, and leaps into his bed at the first opportunity. She and her father enjoy Hawk's liquor a great deal, and before long they have got him into trouble with the law. They end up at his New York City apartment, from whence they proceed to the Metropolitan Museum, where a reverse process of the petrification ray turns various statues of the Greek gods into living beings.

The rest of the novel concerns the chaos caused by the gods having the time of their "lives" drinking and thieving and pranking their way through New York, and later back into the country where Hawk's other home is. But the law is still after him, and the gods soon tire of the pace of modern life, not to mention the strenght of modern liquor. And Hunter's family is still a problem -- is there a way he can solve his problems so that Daphne comes out OK and the more odious of his family (and neighbors) are punished? The ending is actually rather bittersweet, and in some ways the best thing about the book. It's clear that Hunter Hawk, for all his intelligence and cynicism, and for all that he seems to really love Meg, is not a happy person.

I have to say I wasn't enthralled by the book. It's one of those stories where you can see that it's funny and clever throughout, but somehow that doesn't really strike home. Part of it might be some datedness -- the treatment of sex was perhaps intended to be shocking and titillating but for a contemporary audience that hardly registers. The drinking also perhaps doesn't come off in the same spirit so many years after prohibition, and with it necessary to keep in mind that excessive drinking (and wild driving under the influence) isn't necessarily all that funny. I know that makes me sound like a killjoy, but, well, there you are. It's clearly a well-done book, but not a book I could really love.

Some years ago I had read The Stray Lamb, and I'll reproduce the snippet I wrote about that:

This features a fortyish, rich, investment banker type, in 1928 or so, named T. Lawrence Lamb. Lamb becomes fascinated with a beautiful friend of his daughter, who throws herself at him  His wife is a b*tch, so Lamb would like to accept her advances, but he is too strait-laced in habits. Then a mysterious stranger decides to teach him a lesson. He is changed in turn to several different animals, such as a horse, a dog, a seagull, and others.  Chaos ensues, his wife leaves him, he learns to be less straitlaced. It's quite fun, often very funny and very clever. A bit forced at times, and a lot convenient.  But enjoyable.