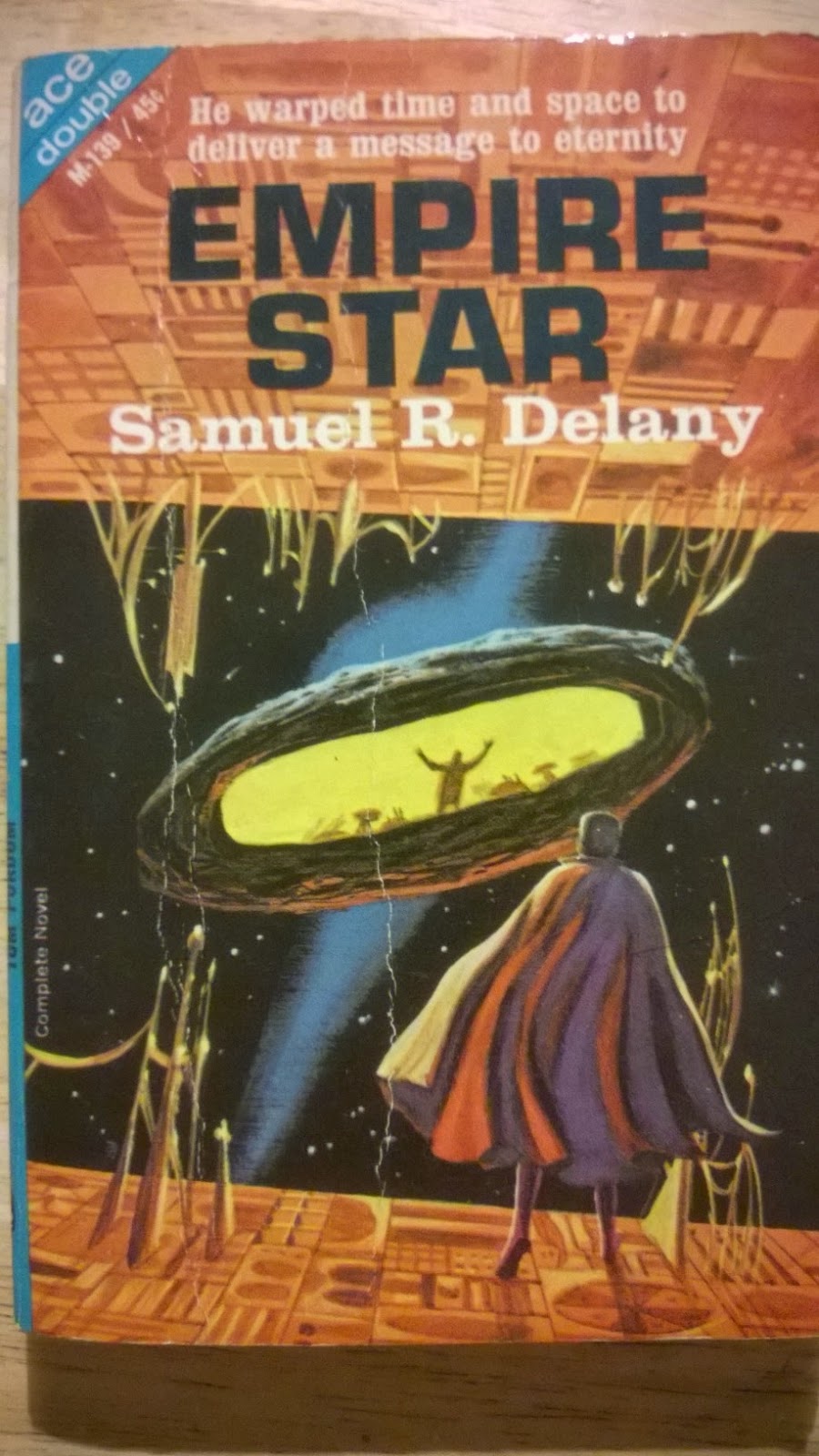 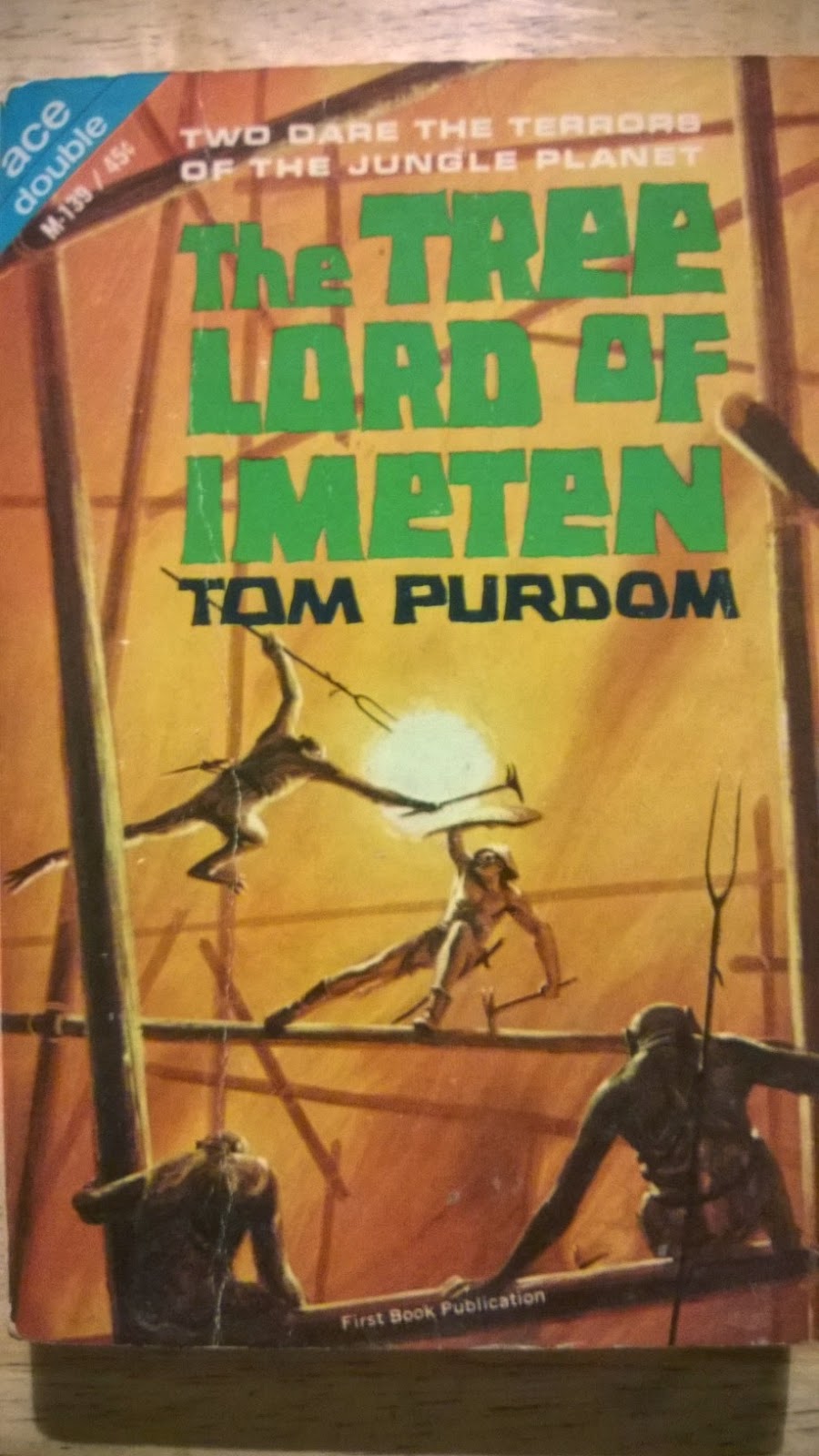 Not having finished reading my latest old bestseller, I'm turning to an Ace Double, as noted previously also an interest of mine. This books pairs a very interesting early novel (or novella) by one of the greatest of SF writers (and a newly minted SFWA Grandmaster) with an enjoyable early novel by a favorite writer of mine, a man whose work flew largely under the radar until a modest increase in visibility engendered by a late career resurgence. So: Samuel R. Delany certainly isn't forgotten, but to an extent Empire Star is underappreciated (in my opinion), and Tom Purdom is surely a writer who deserves a wider audience.

This Ace Double was published in 1966. Empire Star is about 29,000 words long, The Tree Lord of Imeten is about 48,000 words. To the best of my knowledge, neither book appeared in any other form previous to this publication. Delany had 5 novels appear as part of Ace Doubles: his first, The Jewels of Aptor; the first two novels in his Fall of the Towers trilogy; The Ballad of Beta-2, and this one. The Ballad of Beta-2 and Empire Star were later reissued together as #20571 in the last year of Ace Doubles, 1973. My original copy of the two books, bought in 1975 for $1.25, is not bound dos-a-dos like a typical Ace Double -- I think this is a still later reissue of the 1973 Ace Double, but I may be wrong -- perhaps this was the 1973 version (though $1.25 seems a high price).

Samuel R. Delany was justly among the most celebrated SF writers of the 60s and 70s. For me his most congenial work is a remarkable burst of stories and novels from 1966 through 1968 -- those three years saw the publication of his Nebula winning novels Babel-17 and The Einstein Intersection as well as my favorite among his novels, Nova, plus his Nebula winning story "Aye, and Gomorrah", his Nebula and Hugo winner "Time Considered as a Helix of Semi-Precious Stones", and such stories as "The Star Pit", "Driftglass", and "We, in Some Strange Power's Employ, Move on a Rigorous Line". To say that those are my favorites among Delany's work shouldn't be seen as rejecting the value of later stuff such as Trouble on Triton or Tales of Neveryon, which I still enjoy -- it's just that what he did from 1966 through 1968 still impresses me as just plain more fun.

Empire Star came out just at the beginning of this period, in 1966. It is generally grouped with his earlier novels, but in tone it reminds me as much of Babel-17 as any of his stuff, and it quite openly foreshadows aspects of Nova. It doesn't have the enduring reputation of the stories I mentioned above, but it is impressive work, extremely playful in a bravura and quite accomplished fashion -- showing an author clearly besotted with language, clearly interested in allusion and symbolism but still at the point of having fun with it all. It's a thoroughly enjoyable novel, if just that bit less serious than even his slightly later stuff to relegate it to the second rank among his works.

It opens with Comet Jo, a young man on a planet of Tau Ceti devoted to harvesting plyasil and nothing else, encountering a downed alien spaceship and coming into possession of a devil kitten, a crystallized alien called Jewel, and a message to deliver to Empire Star. So he hitches a ride with a spaceship away from Tau Ceti -- despite the fact that he is a simplex boy, and that living in the wider universe may require him to become complex and even multiplex. The story darts rapidly to Earth, to other planets, and to Empire Star; and Jo meets such people as the tortured San Severina, who owns seven enslaved aliens called Lll; and the embodied consciousness of a Lll in a computer -- the Lump; and the suicidal poet Ni Ty Lee, who (like Theodore Sturgeon) seems to have done everything you have done before you could do it; and a Princess escaped from Miss Perrypicker's Academy. What is it about -- well, that's sort of multiplex. It's swift and gay and bittersweet and funny and the ending is delightful, with echoes of Charles Harness but much tighter. It's really a fine work.

Tom Purdom's first story was published in 1957, when he was 21, and over the subsequent 15 years or so he published some 13 stories in a variety of places (Analog, Science Fiction Quarterly, Amazing, Galaxy, etc.) and 5 novels (three of which were Ace Double halves). It would probably be fair to say that he didn't gain a lot of notice, though at least one story made a Wollheim/Carr Best of the Year collection. Then he fell mostly silent until 1990 -- only two stories, one in Galaxy and one in Analog. Beginning in 1990, however, he began to publish short fiction regularly again, most of it in Asimov's, and much of it very impressive indeed. Stories like "Cider", the three "Romance" stories about a Casanova-like character in a posthuman future, and this year's "The Path of the Transgressor" are quite remarkable, as well as later work like 2013's "A Stranger from a Foreign Ship".

So, I am rather an admirer of his latter-day short fiction. I was thus glad when I ran across this Ace Double:-- not only was it a good excuse to reread Empire Star but a good opportunity to try Purdom at novel length, as this was the first of his novels I read. The result is not bad -- The Tree Lord of Imeten isn't a brilliant book at all, and it's noticeably rushed in its conclusion, but it's a fairly original and refreshing story in many ways. It's not as good as Empire Star (not even close) but it's solid work, and the combined Ace Double has to rank as one of the stronger books in the whole series.

Harold is a 21 year old man living in a colony of refugees from a regimented 21st Century Earth. The colony has been established on a plateau on a planet of Delta Pavonis, on a world otherwise dominated by forest, mountain, and ocean. His mother and sister are long dead, and his father and his best friend have just been murdered in some never specified political dispute. A young woman, Joanne, negotiates a deal whereby the two are exiled off the plateau, but not killed.

In the forest they encounter two separate intelligent species -- a ground-dwelling species without hands (just paws) but great linguistic facility; and a tree-dwelling apelike species which has just entered on an Iron Age. The tree-dwellers are violent, and they have enslaved many members of the ground dwelling species. Harold and Joanne are captured by the tree-dwellers, and, sickened by the slaveholding, they scheme to escape and work to free the slaves.

All fairly routine, really, but it's redeemed by a pretty decent job of portraying the two species, particularly the ground-dwellers, and by the fairly well-characterized main characters. Minor effective details are Harold's extreme nearsightedness and Joanne's limp. The plot resolution is a bit rapid, and somewhat conventional. Still, I liked it, and I wondered if Purdom wrote a sequel -- there's definitely room for a story about the eventual contact between the two indigenous species and the rest of the human colony.

As for the sequel I had wondered about: in the past few years (2010-2014) Purdom has published four novelette-length extensions to the story, all published in Asimov's: "Warfriends", "Golva's Ascent", "Warloard", and "Bogdavi's Dream". These follow on fairly directly from the novel, continuing the story of the two alien races and a number of humans: not just Harold and Joanne but other resisters to the (now better explained) political dispute among the human colony. They are very fine work, and I hope we'll eventually see an omnibus of The Tree Lord of Imeten and these follow-on stories.