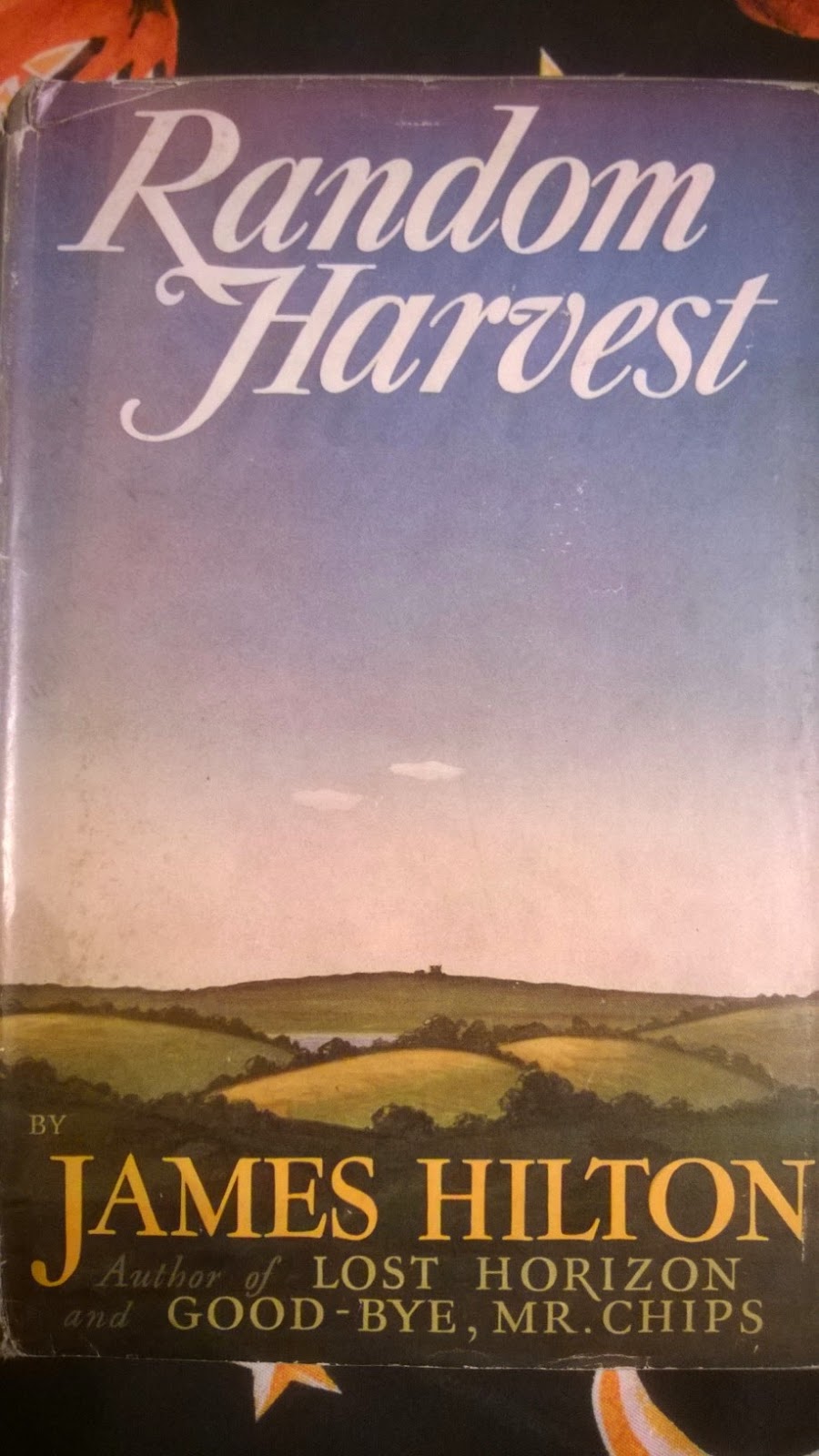 This series of reviews is about Old Bestsellers, obviously enough, and Random Harvest certainly qualifies: it was the second bestselling book of 1941 according to Publishers' Weekly and the New York Times. It's also intended to bring to light somewhat forgotten books, and I freely confess I thought Random Harvest was a likely "forgotten book" when I saw a copy at an antique store in Galesburg, IL. I've certainly heard of James Hilton, and I read Lost Horizon years ago, and I knew that Goodbye, Mr. Chips was also a famous book (and movie). But I pretty much thought those were the only two books by Hilton that anyone knew much about.

That's just me though. I quickly learned that Hilton had three major novelistic successes: Lost Horizon, Goodbye, Mr. Chips, and the book at hand, Random Harvest. All sold very well, all were made into well-received movies. It still seems to me that the first two are much more widely remembered, in both book and movie form -- but a glance at the Amazon page for Random Harvest reveals no fewer than 123 reader reviews, with an averaging rating of 4.3 stars (and of the two 1 star reviews one is complaining about not receiving his e-book copy -- so a review of the service not the book -- and the other claims to love the movie but hate the book -- suggesting to me a reader confused by such things as extended flashbacks ... and probably words -- but I snark).

James Hilton was born in Lancashire in 1900, son of a headmaster (and indeed we are told that his father was an inspiration for the main character of Goodbye, Mr. Chips). His first novel was published in 1920, but his first major success was with Lost Horizon in 1933. Goodbye, Mr. Chips followed a year later, and sold even better, evidently reigniting sales for his earlier novels. Hilton moved to Hollywood in the mid-30s, working on a number of screenplays, most notably perhaps Mrs. Miniver, for which he won an Oscar. (Mrs. Miniver also won for Best Picture -- ironically, another nominated film that year was Random Harvest.) Hilton married twice and divorced twice -- his first wife, Alice Brown, was an Englishwoman and his second wife, Galina Kopineck, was "a starlet", though I can't find her name in the IMDB. He died in 1954.

Random Harvest opens with the narrator, a Cambridge graduate student named Harrison, encountering an older man named Charles Rainier on a train. They discuss the impending war (this is 1937) and a shared interest in psychology, as well as a story about Rainier's service in the Great War. Afterward Harrison looks Rainier up and learns that he's a successful business owner and a Member of Parliament, and too that Rainier is to be a guest at a Cambridge function for which Harrison is one of the hosts ... One thing leads to another and after Harrison finishes his degree he takes a job as Rainier's secretary.

They become somewhat close, and eventually Charles tells Harrison his story (recounted to us in third person). He was a younger son of an autocratic father who ran a prominent company. As with so many young men, he joined the army to fight the Germans, and was severely injured. He remembered nothing from the time of his injury until waking on a bench in the Liverpool rain a year or two after the armistice. Then he returned home, to find his father dying, and the rest of his rather awful family a bit miffed that he is still alive and that their cut of the inheritance just got smaller. He returns to Cambridge, making a bit of a mark, but before he can take a degree his brother has run the family company into the ground, and Charles is pressured into taking over the firm. He makes a great success of it, and over time falls in love with his much younger step-niece (she is 14 and he 25 when they meet ... a bit of a Door Into Summer vibe ...) But she suddenly throws him over as they are about to get married. The rest of the story is a bit routine: continued success with the firm, a pleasant but apparently loveless marriage to an efficient secretary who as his wife works hard to make him a social and political leader, and a growing sense of loss, and of having missed a chance to do what he really should have with his life.

Then we return to the present time, as war grows closer. Harrison and Rainier attend a play, and that plus a chance mention of a certain hospital suddenly leads to Rainier regaining his memory of the lost years between his injury and his waking up in Liverpool ... and we get an account of this time, when he had no idea who he was, or what his family was, and called himself Smith after escaping from an asylum, soon meeting an actress in a touring company of players, and joining the company as a sort of accountant and later, briefly, a successful actor (I was reminded of Scaramouche), while he and the actress become closer ... well, I won't spoil anything, but the crisis and resolution obviously involve Rainier's need to reconcile his two separate lives -- if even he can.

The ending is beautiful, I have to say, if perhaps a bit contrived, and certainly representative of popular fiction. But that's what it is, after all. Hilton is also deeply concerned with the nature of England, and a return to a simpler, truer, time. I think in this he is a bit sentimental and uncritical of what that Olde England was really like. Its clear that Rainier (and perhaps Hilton) expected the second War to shock England into major changes, and so it did, but I don't think the changes were precisely as this novel seems to advocate. All that said, it does provoke thought about such issues, and more importantly, it's a greatly enjoyable book to read, with a really moving finish.
Posted by Rich Horton at 8:07 PM