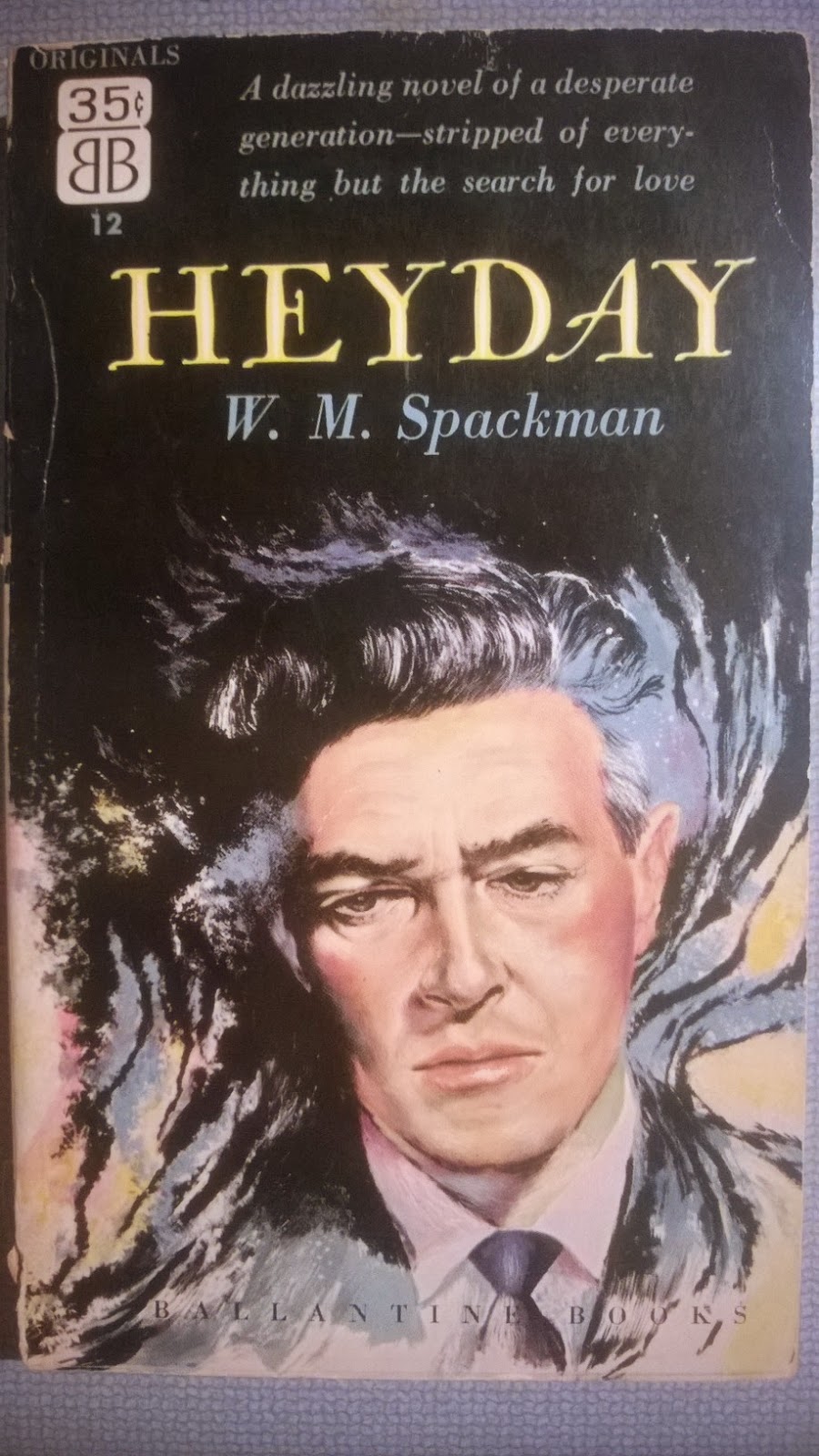 
I'm cheating a bit here ... this wasn't a bestseller (though I think it did OK), and it's not quite as old as the usual parameters of this series. (I like to stay pre-1950, and this book is from 1953.) It's also not exactly forgotten, though it was in danger of being forgotten when Spackman's career stalled for a couple of decades as he couldn't sell his (outstanding) second novel.

One of my favorite 20th Century American writers is W. M. Spackman.  Spackman was a Quaker, of old family and old money, born in 1905, a member of the Princeton Class of 1927.  The depression apparently ruined his plans for his life (he lost all his money), and he spent some time in journalism and radio, before ending up in academe in the 50s, though after selling his first novel he returned to Princeton to write (but apparently not to teach).  His first novel was Heyday, published in 1953, when he was 48. It was apparently a modest success. His next novel, An Armful of Warm Girl, was finished by 1959 or so, but he couldn't sell it.  He concentrated on his academic work then, publishing some well-regarded essays and a collection of poems, until An Armful of Warm Girl was rediscovered and eventually published in Harper's in 1977, and as a book in 1978. Three more novels were published by 1985 (A Presence with Secrets, A Difference of Design, and A Little Decorum, for Once).  Spackman died in 1990, leaving an unpublished novel (As I Sauntered Out, One Midcentury Morning) and some work on a revision to Heyday.  All six of these novels (Heyday in its partially revised form) and a couple of short stories were published by the magnificent folks at The Dalkey Archive Press in 1997 as The Collected Fiction of W. M. Spackman.  I've written about that book before, I think it's wonderful.  The later novels, from Armful on, are generally of a piece -- the plots feature lighthearted adultery, usually between a man in his 50s or older and a somewhat younger woman (the ages range from the late teens to the 40s through the various books).  The primary delight of the novels is the prose -- as somebody wrote, "confectionary" -- a breathless, elegant, supple, sheerly gorgeous stream of words -- wry and purposely affected dialogue, ardent descriptions (usually of the inexhaustible charms of beautiful women) -- and constant movement.  For some tastes the prose might be too affected, too arch -- though not for me.  For many tastes, including mine, if I let it bother me, the plots and situations and characterizations are very classist, arguably sexist, and full of wish-fulfillment.  The general mood is comic, though the novels can turn meditative and somewhat melancholy at times.

Heyday is a rather different beast. I have read both versions.  The revisions are mostly severe cuts.  The original novel, about twice the length of the later revision, was published simultaneously in hardcover and paperback by Ballantine in 1953. The basic subject of the novel, in both forms, is the tribulations of the Princeton Class of 1927 during the Depression.  We follow a small group of men and women as they try to find work, hatch silly schemes like riding out the slump on a communal farm, and, mostly, go to parties and sleep with each other.  The narrator is a man named Webb Fletcher, a Quaker born in Pennsylvania but raised in Wilmington, Delaware (much like Spackman), but his main interest is chronicling the love life of a distant cousin of his, Malachi ("Mike") Fletcher, also a Quaker and a fellow member of the Class of 1927.  The storyline follows Mike as he almost falls in love with Kitty Locke, only to find her long term involvement with a somewhat abusive other man too much to overcome; and as he fends off the desperate attentions of Jill Starr, a fragile woman who is being blatantly cheated on by her husband; then as he enters an affair with Stephanie Lowndesden, only to lose her to Webb, after which he rekindles things with Kitty, even though it is clear his chance for real happiness is gone.  In the later, revised, version, that's pretty much all there is (intermixed, to be sure, with some descriptions of Webb's amorous adventures, particularly with Stephanie), but it works pretty well -- it's a desperate portrayal of a rather desperate, not wholly sympathetic, group of people.  At the same time it is basically comic, though tinged with melancholy, as what wouldn't be set against the backdrop of the Depression.  (And there is only a smidgen of recognition that these characters are privileged and lucky, with resources to fall back on that many a poor person entirely lacked.) The prose is pretty good, though not pitched quite to the level of Spackman's later novels (much of the dialogue is already pure Spackman).

The parts Spackman cut tend to shift the focus quite a bit, and to point a moral rather more explicitly.  They also move the novel more to the tragic than comic direction.  The original novel opens as Webb Fletcher, a Lt Cdr for Navy Intelligence, finds out that Mike Fletcher has died in the Pacific in 1942, attacking a Japanese ship with his carrier-based plane.  (Apparently he was not a Conscientious Objector, even though a Quaker.)  Webb begins to reflect on what he knew of Mike, and the ways in which he and his cousin were very similar, and yet also the ways in which Webb was able to avoid Mike's desolate end.  (Not so much dying, but entering into a less than satisfactory marriage, it later becomes clear.  In the revised version, I don't think it's made clear that Mike's marriage to Kitty is a second-best sort of thing.)  And Webb reflects a bit on his Princeton career, and then on a trip to France shortly after college at which he encountered Davy Starr with a silly girl named Jill, and Jill's friend Barbara, or Bar, with whom Webb falls head over heels in love.  Webb and Bar are married, then the Depression hits, and they spend some time in Chicago before Webb gets a job in New York.  On the way to meet Webb in New York, Bar, not concentrating, runs over three children on a rural road, and gets sent to prison for manslaughter.

Which makes for a slightly lurid opening.  The novel continues to the middle section, which is pretty much exactly the revised version, except that explicit references to Webb's being married, and to Bar's travails in prison, are excised.  Thus the original version is much more balanced in that it is about both Webb and Mike, and that much of the novel is really concerned with Webb's loneliness, missing Bar, and how his eventual despair (particularly after an early parole chance is denied) nearly leads to what might have been a disastrous affair with Kitty Locke, and does lead to his actually rather sweet, but doomed, affair with Stephanie Lowndesden.  Finally, there is a closing section, also cut, detailing Webb's and Bar's reunion in 1937, after she is finally released from prison, and their beginning to rebuild their life (apparently successfully, as far as we can tell from the perspective of 1942).  Spackman also takes some care to point out that Webb's eventual salvation was that he fell thoroughly in love with someone, while Mike is portrayed as never having been able to give himself so completely to a woman (there are hints that maybe he should have taken Jill away from Davy Starr).  There is also a mild suggestion that Stephanie is tragically, or at least sadly, deprived of her own true love because Webb is already "taken".

All in all the revised version seems a bit more explicitly Fitzgeraldian -- indeed, Spackman himself, in a note at the end of 1953 edition, brings up Fitzgerald. Besides Fitzgerald the most obvious comparison might be the great British novelist Henry Green, born in the same year as Spackman. Another comparison might be with the early novels of yet another great writer born in 1905, Anthony Powell, especially his first, Afternoon Men. Heyday is a pretty good book, one that you would probably call very promising had you encountered it in 1953, but maybe also a bit unsure of itself -- too ready to force a point, as it were. And maybe a bit too overtly portentous.