Review: The Hieros Gamos of Sam and An Smith; and Queen of the States; by Josephine Saxton

The Hieros Gamos of Sam and An Smith; and Queen of the States; by Josephine Saxton

I recently reviewed Josephine Saxton's Vector for Seven, so I won't rehash the potted bio I did then. Suffice it to say that Saxton was a significant figure in the English SF New Wave of the late 1960s (though she never appeared in New Worlds, and in fact F&SF was her primary short fiction market.) I say that, yet I think her fiction so individual that she should be thought of as a writer with her own vision, who was associated with the New Wave because at that time that seemed the proper home for anyone as strange as she. Here I've considered her first (and likely still best known) novel, and also one of her last, perhaps her last full length novel. 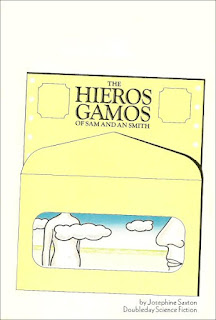 Her first novel was The Hieros Game of Sam and An Smith, which was published by Doubleday in 1969. Doubleday published her first three books in three consecutive years, no further books appeared until 1980. And on the face of it none of her novels seem likely to have been big sellers to the SF audience. Doubleday at that time relied heavily on library sales, and I sense that they could sell a reliable quantity of any book they could slap an SF label on. That allowed them, perhaps, to take risks that other firms might not. It also sometimes put a cap on the exposure of their books. At any rate, only Saxton's first Doubleday novel got a paperback reprint, from the fairly low end publisher Curtis Books. (None of this, I add, should imply that they are not good books!)

The Hieros Gamos of Sam and An Smith opens with a boy of about 14 wandering what seems an entirely deserted landscape. There are apparently a very few other people somewhere, who he avoids, and there is trash visible. Sometimes, it seems, he can scrounge food or clothing from places. For an SF reader, the immediate thought it that he is a survivor of some apocalyptic event. (We learn that Saxton has very different plans for us!) The boy hears a sound, and against his better instincts he investigates, and finds a dead woman, with an apparently newborn girl. The boy tries to make himself leave -- he knows this is the safest course -- but eventually takes the infant, drawn by her cries, and takes her with him, trying to comfort her. Soon he must feed her, and after much distress finds some cans of condensed milk. And so he begins walking again, with the baby in his arms. So far, so post-apocalyptic!

But their next stop is a town, still seemingly empty, but full of stores -- well-stocked stores, but empty of people. The two end up in a sort of department store, where the boy finds food for the baby (and for him) and clothes, etc. And occasional hints of a mysterious other. They hole up in the department store for some four years, the boy raising the baby as best he can, with apparently unlimited necessities available in this store. Then they set out walking again. And the novel continues ... an ongoing journey, a story of growth. The boy teaches the girl to talk and she learns about the world as best she can by asking him questions. Their walking takes them through a series of still curiously empty places, but full of what seem typical 1960s English structures. They give each other names (Beryl and George.) And the time comes when they must decide what do with their lives, together or apart. They must, in essence, grow up, perhaps? I won't say how it ends (and if you don't know what the title of the novel means, don't look it up until after reading the book.) But it's effective, and moving, and the very end is -- not perhaps what we expect.

It's hard for me to quite describe how strange, how unexpected, this novel is. It never goes where one expects. It is also often quite funny (Saxton is always funny) -- not laugh out loud funny, not sitcom stuff, but slyly funny. It's also sweet, and powerful, and oddly mesmerizing. 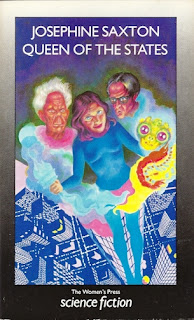 Queen of the States (The Women's Press, 1986) is a very different novel, but shares some of the same weirdness I find in The Hieros Gamos of Sam and An Smith (and for that matter in Vector for Seven.) It opens with Magdalen Hayward having left her husband Clive, driven off somewhere remote, to consider her new life, or a return to Clive. She gets out of her car and -- is sucked up into an alien spaceship.

On the spaceship she wakes to find the very odd aliens communicating with her, about the simulacra they have made of a room for her, some food, etc. It seems she is an object of study, very interesting to them. And they are willing to make her whatever she wants -- another room, great food, even, eventually, other people. (But not her cherished toy bear.)

And then we are told (unreliably) that Magdalen is in an asylum, having committed herself, presumably due to stress resulting from Clive's cheating, and his generally erratic behavior. The nurses there are cruel, the other patients generally batty, and Magdalen is soon considering leaving. Of course, when she leaves she will return to the White House, and her role as Queen of the United States.

And the novel, in short chapters, zigs and zags from reality to reality. We are often in Magdelen's POV but we also have scenes with Clive, with his student/lover, with another patient, with a couple of Magdalen's lovers (in the past? present? or in another reality?) And also we see the POV of a psychiatrist, who seems to be treating at times both Magdalen and Clive's young lover. The psychiatrist also has an experience with a UFO, and soon is trying to write a book that will revolutionize his field. Magdalen contemplates leaving the asylum, or leaving the aliens, or confronting Clive ...

It's a wild enough ride, and it never takes itself too seriously. It never commits to the truth of any of the suggested realities. It's quite funny, in a noticeably Saxtonian way. It's got the same sort of extra-real affect that the other two Saxton novels I've read have. I don't want to suggest it's weird like, say, Robert Shea Wilson. It's a very grounded weird, a very real-seeming weird. It didn't work as well on the whole, for me, as either Hieros Gamos or Vector for Seven, perhaps because it was never quite as involving, and never quite as moving, as those books. But I'm glad I read it.