Potential Hugo nominations for the 1960 Hugos (stories from 1959)

Here's my last planned post on potential Hugo nominees from the past. This is for the 1960 Hugos, for stories from 1959. Thus I close out the decades of the 1950s. Also, I was born in 1959, in October, and so this is a pretty important year for me! (Not that I remember it well!) The 1960 Worldcon was in Pittsburgh. I highlight the actual Hugo nominees and winners below.

I will once again mention Jo Walton's exeptional book An Informal History of the Hugos, in which she discusses the Hugo Awards from 1953 through 2000, including the nominees and potential additional stories to consider. I will also mention Richard A. Lupoff's What If? series of anthologies, which chose a single alternate story for each year (of story publication) from 1952 through 1973. 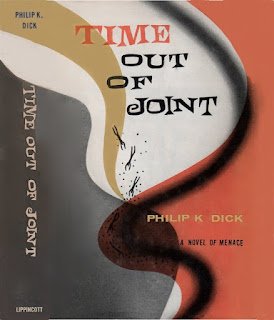 Time Out of Joint, by Philip K. Dick

The Haunting of Hill House, by Shirley Jackson

A for Anything aka The People Maker, by Damon Knight

The Sirens of Titan, by Kurt Vonnegut, Jr. Hugo nominee

We Claim These Stars! aka "Hunters of the Sky Cave", by Poul Anderson

The Manchurian Candidate, by Richard Condon

First to the Stars, by Rex Gordon

The Beast Master, by Andre Norton

My choice for the Hugo would be Time Out of Joint, one of my favorite Philip K. Dick novels. I don't mind the Hugo for Starship Troopers, however, as I think it an interesting and pretty well done novel (even if I don't approve of the political organization the novel suggests.) I haven't read the Jackson novel but it sure sounds like it is worthy of a nomination. The Sirens of Titan is quite good, too. A for Anything is a decent novel, but not great -- Knight wouldn't really figure out how to write a fully satisfying novel for a couple of decades at least. Based on what I've read about them, very possibly Mordecai Roshwald's Level 7 and Jacquetta Hawkes' Providence Island are also Hugo-worthy, and perhaps even The Manchurian Candidate.

This was the height of the Cold War, and the height of fears of Nuclear War, and that is emphasized by the popular success of out and out "End of the World due to Nuclear War" books like Level 7; Alas, Babylon; A Canticle for Leibowitz; and On The Beach, all published in this time frame. For that matter, Providence Island is about a lost race resisting the use of their island for nuclear tests, and The Manchurian Candidate is surely a Cold War novel to the max!

I list Pohl and Kornbluth's Wolfbane, but a shorter version (perhaps just novella length) appeared in 1957. I was amused to learn, in searching for it in the ISFDB, that the slight variant title Wolfsbane turns out to be a very oft-used title -- at least eight novels and a dozen or more short stories. Note also the two titles with exclamation points -- Dorsai! was the title of the Astounding serial, clumsily retitled, because Don Wollheim, for the Ace Double (which was also abridged.) And Anderson later collected We Claim These Stars! in Agent of the Terran Empire, retitled "Hunters of the Sky Cave" (and possibly revised.) Despite its presence in a collection, it is novel length by my estimate, 45,000 or more words.

Jo Walton suggests that Starship Troopers was going to win against this competition no matter what, and that despite its controversial aspects it's a major novel that has lasted. She hints that she might prefer either Eric Frank Russell's Next of Kin (which I mentioned in the post about 1958 novels in its slightly shorter form as The Space Willies) or Jackson's The Haunting of Hill House.

A couple of novels worth mentioning that don't quite qualify are Psycho, by Robert Bloch, which isn't SF or Fantasy (there's no supernatural element at all), and A Canticle for Leibowitz, by Walter M. Miller, which is a fantastic novel and a very worthy Hugo Winner -- in 1961! It is often cited (for example by the ISFDB) as a 1959 novel, but though it is copyrighted 1959 is was not published until February 1960. (Thanks to Denny Lien for the research that established this.) Likely the publisher originally scheduled it for late 1959 but delayed it until 1960 for marketing reasons (better chances to get reviews, something like that.) Reputedly Algis Budrys was bitter that his great novel Rogue Moon lost the Hugo to A Canticle for Leibowitz, which he thought ineligible due to the 1959 copyright -- but he had no case to complain, as the book really was a 1960 book.

"A Handful of Stars", by Poul Anderson (Amazing, May)

"Someone to Watch Over Me", by "Christopher Grimm" (Floyd C. Gale and H. L. Gold) (Galaxy, October)

Another fairly thin novella list. I'd lean towards "The Alley Man" though I haven't read Brunner's "The Whole Man", which I assume is an early version of the novel of the same title -- the novel, at least, is strong work, and if the novella is as good perhaps it would have got my Hugo vote. The Anderson stories are solid work. The Christopher Grimm story is pretty enjoyable -- the Gold brothers (Floyd was Horace's brother, though he used Gale for his SF work, perhaps to avoid accusations of nepotism?) were a pretty strong writing team.

"Wherever You Are", by "Winston P. Sanders" (Poul Anderson) (Astounding, April)

Well, my vote for best novelette of 1959 goes to the obvious choice, the same choice the voters in 1960 made for the Best Short Fiction Hugo, "Flowers for Algernon". I will say that "Take Wooden Indians" is one of my favorite Avram Davidson stories; and "Lean Times in Lankhmar" is one of the best Fafhrd and the Grey Mouser stories, and "What Now, Little Man?" is Mark Clifton at his bleak best, and "Jordan" is a major People story (indeed, as I recall, the "First Contact" story in that set) and "The Waiting Grounds" is one of the first J. G. Ballard stories to make a significant impact ... but, yeah, it's "Flowers for Algernon". (Jo Walton also endorsed the choice of "Flowers for Algernon".)

Of the other possibilities, one might note that "Despoilers of the Golden Empire" isn't really SF, though it's a bit of an, er, despoiler to say so. "Dodkin's Job" is uncharacteristic Vance, but it's pretty good. And I confess I know nothing about the Ralph Williams story, though Williams did do some interesting work.

"The Man Who Lost the Sea", by Theodore Sturgeon (F&SF, October) Hugo nominee

"A Man to My Wounding" aka "State of Assassination", by Poul Anderson (EQMM, December)

"The Shoreline at Sunset", by Ray Bradbury (F&SF, March)

"The Distant Sound of Engines", by Algis Budrys (F&SF, March)

"The Man Who Tasted Ashes", by Algis Budrys (If, February)

"The Montavarde Camera", by Avram Davidson (F&SF, May)

"Plenitude", by "Will Worthington" (Will Mohler) (F&SF, November)

Once again, a slam dunk for me, despite a very strong shortlist. "The Man Who Lost the Sea" is hands down one of the greatest SF stories of all time. I would have voted for it ahead of "Flowers for Algernon" for "Best Short Fiction" on the 1960 Hugo ballot. That said, "The Pi Man" is brilliant. "All You Zombies ..." is brilliant. "Dagon" is brilliant. I mean, heck, what a shortlist!

There is plenty of good stuff in the "other possibilities" too -- notably a first rate Ray Bradbury story, some examples of Algis Budrys at close to his obsessive best, a neat biter-bit story from Avram Davidson, a couple of good early Cordwainer Smith stories, and a solid work by the nearly forgotten "Will Worthington".

Sturgeon's "The Man Who Lost the Sea" was selected for Martha Foley's The Best American Short Stories 1960. Indeed, under Foley's long editorship of that series, only two SF stories from genre sources were reprinted, the other being Judith Merril's "Dead Center" in the 1955 volume. Foley died in 1977, and after that the series had different guest editors each year, allowing, one presumes, a more diverse, more varied, perspective, and increasing the likelihood of genre pieces being selected. Offhand, I can think of four such stories making it: Harlan Ellison's "The Man Who Rowed Christopher Columbus Ashore" in the 1993 volume (guest editor Louise Erdrich); two from the 2005 volume, guest edited by the notoriously SF friendly Michael Chabon: Tim Pratt's "Hart and Boot" and Cory Doctorow's "Anda's Game"; and Ted Chiang's "The Great Silence" from the 2016 volume, edited by another SF friendly writer, Junot Diaz. (Very possibly other SF/F stories have been chosen as well in recent years.) Note that there were occasional fantastical stories from traditional literary publications in the series all along, though not, I think, very many. But Karen Russell, for example, has appeared several times, with distinctly fantastical stories -- but always from publications like Granta and the New Yorker.