Suzanne Palmer has been publishing short fiction since 2005, and, curiously perhaps for an American writer, she first made her mark with stories for Andy Cox's magazines in the UK (Interzone and Black Static) and for the Australian publication Andromeda Spaceways Inflight Magazine. I first noticed her with the Black Static story "Zombie Cabana Boy" in 2010, which won me over despite being about perhaps my least favorite horror trope. She has been publishing more widely in the last decade, with stories both thoughtful and full of adventure and action; and she has a Best Novelette Hugo for "The Secret Life of Bots". 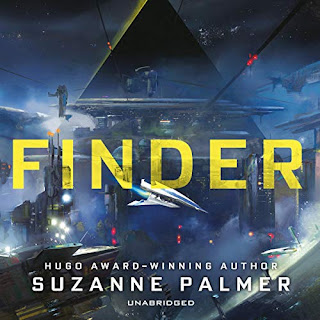 Finder was her first novel, from 2019. It has spawned two sequels (Driving the Deep (2020) and The Scavenger Door (2021)), neither of which I've read. I will say that Finder is a perfectly successful standalone; though its protagonist is clearly, on the first hand the sort of character who could be the driver of an entire series, and on the second hand, one who has a personal situation that could drive a more tightly connected set of books with a true narrative arc. I read the book by listening to the audio version. The narrator is Joe Hempel. (I will likely misspell some names, or forget some, in the review -- a hazard of reading by listening. Also, there is a map in the printed book, which might have helped!)

This main character is named Fergus Ferguson. He was born on Earth in a climate-ruined future, and after a fraught childhood in flooded Scotland, escaped to Mars as a teen. He became an accidental hero of the Martian resistance in a losing fight, but having lost his closest friend, a combination of survivor guilt and perhaps some PTSD led him to keep escaping, it seems; and his current job is to find things; wherever they might be in the human occupied Galaxy. This Galaxy appears to be the fairly typical sort we see in a lot of SF: connected by wormholes of some sort, with planets and space habitats scattered widely, some home to humans, others to a variety of alien species.

Fergus has come to Cernekan, a loose collection of different types of space-based habitats, in search of Venetia's Sword, a spaceship which was stolen by a criminal named Arum Gilger. On arrival, he meets a woman named Mother Vahn, and learns quickly that she and Gilger are enemies ... and almost immediately their transport is sabotaged, and Mother Vahn is killed. Fergus manages to escape and is rescued by the rest of Mother Vahn's family, who appear to be clones. Fergus learns -- despite the fierce suspicions of some of the Vahns, especially the teenager Mari, that Cernekan is politically divided into roughly five power centers: the Governor, the "Wheels" (which is to say, the habitats where the Vahns (lichen farmers) and the arms dealer Harcourt live), the medical satellite, the criminal organization running the mines, and Arum Gilger's upstart criminal group. (There are also the mysterious Shielders, who live in the sunshields that control solar radiation for Cernekan, and are very reclusive.) The Vahns somewhat reluctantly trust Fergus, believing that his mission to recover the stolen spaceship puts him on the same side as them, who want Gilger stopped.

The novel's pace is extremely rapid, with neat action segments following each other relentlessly. It soon becomes clear that Gilger is making a play for control of Cernekan. He's a sociopath, and his chief henchman, Bor Graf, is even more clearly a psychopath, given to murdering people (especially Vahns) on a whim. Gilger has formed an alliance with the miners, with the aim of destabilizing Cernekan. Fergus begins to take actions in support of the other side (basically the Governor and the Wheels) with help from Harcourt (another ex-Martian) and (reluctantly) Mari Vahn. Full scale war breaks out, and it soon is clear that Gilger is winning. But Fergus is able to do some good (taking Venetia's Sword out of action is one thing) until Harcourt's daughter on Mars is kidnapped by Gilger's thugs, and the price for her life is that Harcourt stay out of the battle. All may be lost ...

I've not mentioned a key outside factor -- the alien Asiig, who have lurked near Cernekan for decades, occasionally taking a person, and either not returning them, or returning them much changed. It's clear to the reader that the Asiig will eventually play a key role. And, indeed, that is one of a couple of quibbles I had with the book -- the Asiig's actions have a certain deus ex machina feel. My other quibble is one I have with many novels these days -- the bad guys are so bad, so sneeringly, pyschopathically horrible, that they stretch belief. Moreover, one has to ask -- what kind of polity would tolerate an Arum Gilger -- or especially a Bor Graf -- for any period of time? Really, one comes to the conclusion that Cernekan is a pretty dreadfully flawed society.

At any rate -- the novel is still a very enjoyable read. As I said, the pace is headlong, and well-maintained (though a side trip to Mars perhaps is a bit of a distraction.) At first it seemed set up to be rather light, a caper novel; but it's not. Fergus has his own troubled backstory, and the novel itself is a war novel, with a pretty extreme body count. But it's still a good deal of hectic fun, with some very clever plotty bits, and some nice humor mixed throughout. It's a first novel, and I'd say that shows, but it's a good first novel, and I'm definitely going to be checking out the sequels.