From the Height of the New Wave: Vector for Seven, by Josephine Saxton

From the Height of the New Wave: Vector for Seven, by Josephine Saxton 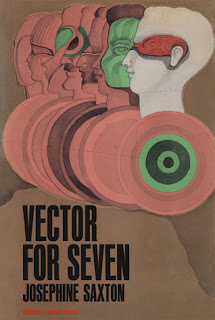 I titled this review "From the Height of the New Wave", but I think that's an unfair description of the novel. That said, I think it's possible that the only place in publishing hospitable to a novel like this was the New Wave, particularly the British New Wave, in Science Fiction in the late 1960s. Josephine Saxton's imagination, and her style, were very much entirely her own; and the fact that that imagination intersected with SFnal images seems to have led her to the science fiction magazines.

Saxton was born in Yorkshire in 1935. Her first story, "The Wall", appeared in Science Fantasy when she was 30. Science Fantasy, edited by Kyril Bonfliglioli (with the yeoman assistance of Keith Roberts) was a sister magazine to Michael Moorcock's New Worlds, which at that time surely represented the epicenter of the New Wave in SF. Saxton's next story was in Judith Merril's England Swings SF (Merril had reprinted "The Wall" in her Best of the Year anthology.) Merril was the leading American cheerleader for the English New Wave, and England Swings SF was her attempt to showcase that movement for American readers. She also had stories in such New Wave associated venues as Harlan Ellison's Again, Dangerous Visions; and Samuel R. Delany and Marilyn Hacker's Quark/3. The Magazine of Fantasy and Science Fiction was her primary home for short fiction. Saxton produced three novels in this period (1969-1971): The Hieros Gamos of Sam and An Smith, Vector for Seven, and Group Feast. Short fiction appeared for a couple further decades, and a few more novels in the 1980s: two short novels about a character called Jane Saint, and her last full length novel, Queen of the States, in 1986. She has not published fiction since 1992, though a book about gardening appeared in 1996. She is still living, nearly 87 as I write.

Vector for Seven is subtitled "The Weltenschauung of Mrs. Amelia Mortimer and Friends". It opens at an airfield in England. Mrs. Amelia Mortimer is a 53 year old widow, and she has spent a healthy sum on an intriguing tour of a mysterious nature. There are five further tourists waiting for the tour to start: Sophia Smith, a blowsy young woman, given to exaggerating her sexual availability; Mr. Edward Hartington-Smythe, an older man, a widower, apparently looking for a final interesting trip; Obadiah Crutch, a young man with a motorcycle, evidently a typical late '60s youth; Martha, an older woman who seems to be a Gypsy; and Septimus, a boy -- actually an hermaphrodite, who strangely has no parent or guardian.

The novel starts very very slowly, and the impatient reader may give up on it. This echoes the slow start to the tour -- nothing happens for quite a while, and then the "driver" (the only name by which he is called) shows up; and it turns out there will be no aeroplane -- they all get on a bus, and begin driving. And for a long time, they seem to get nowhere.

We do learn a bit about the various travellers. At first they seem a universally unpleasant group of people, but over the course of the book they grow, and we learn to know them better. After a shocking early incident (Obadiah's motorcycle is run over, and he sets it on fire, losing an eye in the subsequent explosion) the group's bus trip finally terminates at an airfield where they set off for South America. What follows is a phantasmagorical journey, by air, by bus, by train, by helicopter, by submarine, and by ship -- first to South America, and the Nazca plains, and a tribal group where Sophia decides to stay. Then to the US, and a trip across the country, and the return of Sophia. There are ambiguous encounters with UFOs. There is something nearly approaching an orgy. There is a striking variety of dinners described. Septimus learns to play snooker and chess. And throughout it all these characters grow in the reader's mind. The final sequence is an extended interlude back in England, at Mrs. Mortimer's place, featuring a "birth, a marriage, and a death" -- and a dinner! -- and some variety of resolution for all the characters.

Quite unexpectedly the novel becomes powerful, quite moving. It is a thoroughly original exercise: I don't know of any book much like it. It is often quite funny. It is sexy at times. It is distinctly feminist. There is music -- pop music and, particularly, 20th Century classical music (notably Olivier Messiaen.) And there is a great deal I've said nothing about -- the beautiful armless and legless woman, for example. I had no idea what I was getting into when I started it, and I was surprised throughout. This isn't a book for everyone, but for the right reader, it's remarkable. John Clute and Peter Nicholls write, in the Science Fiction Encyclopedia entry on Saxton: "a register of perilous ambivalence, half Inner Space, half mutable and frustrating external world." -- which seems to get at where Saxton's imagination lives just perfectly.