T. H. White (1906-1964) is of course primarily -- almost exclusively -- remembered for The Once and Future King, his brilliant tetralogy (or single novel) aboout King Arthur. But he wrote a great deal, including two science fiction novels in the 1930s (Earth Stopped and Gone to Ground.) He wrote the first three parts of The Once and Future King (The Sword in the Stone, The Witch in the Wood, and The Ill-Made Knight) in the late '30s and early '40s, but just after the war he produced this delightful children's book, Mistress Masham's Repose. It was first published in the US in 1946, and the next year came out in the UK. (The Once and Future King was published in full in 1958, with the first and second sections much revised (and the second retitled The Queen of Air and Darkness) and new fourth section added, The Candle in the Wind. There is a pendant, The Book of Merlyn, written in 1941 but not published until 1977.) 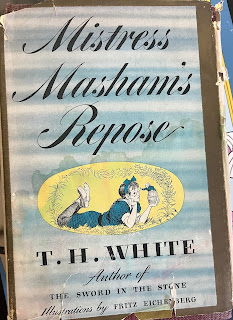 My copy of Mistress Masham's Repose appears to be a true first edition. (Not that that is impressive -- the same book in the same condition runs about $10 at Abebooks.) It is inscribed "Vera and Gene Brown. Oct. 1946." The illustrations are by Fritz Eichenberg. (I called this an "Old Bestseller Review" -- I doubt this was a true bestseller, but I think it was very well-received from the beginning.)

The story concerns Maria, a 10 year old girl living on a decaying estate, Malplaquet, in Northamptonshire. She is an orphan, and her guardians are an extremely unpleasant pair, Miss Brown and the Vicar. The two of them are conspiring to steal Maria's inheritance; and in the mean time are abusive, and are embezzling from her. One day while the Vicar and Miss Brown are malingering (a common event) she takes advantage of her freedom to take a boat on one of the little lakes or ponds on the estate, and comes to a tiny island. She goes ashore, and with difficulty reaches a structure (a folly) on the island, and while poking around she sees a tiny person. Fascinated, she picks the little woman up and decides to take her home, as sort of a doll, despite the fierce resistance in the form of tiny pinpricks from a tiny man ... Back in her room, the little woman refuses to be fed and refuses to cooperate, and Maria takes her to her only friend (besides the Cook): the Professor, an aging Latin scholar. The Professor immediately rebukes her -- surely she must realize that these little people have as much right as anyone for liberty, and he urges her to return the little woman home.

Eventually, Maria reluctantly agrees, and takes the woman back to the island. She hatches a plan to benefit the islanders -- there are a few hundred -- to do things to benefit the islanders, and after some suspicion of her, they start to accept her. But her clumsy attempts to help, and her desire to be praised for that, backfire as well, and the Professor urges her again to understand that these are independent agents, and know best how to live their lives. (He uses the Cargo Cult story as a bad example.) By now they have found out that these little people are Lilliputians, brought to England by a sea captain who had rescued Gulliver and knew their location. The captain had planned to make a fortune exhibiting them, but the Lilliputians were happily able to escape and make there way to this now neglected small island.

The rest of the plot revolves around the danger of the Lilliputians being discovered by Miss Brown and the Vicar, who will doubtless exploit them much as the captain had planned. In addition, they are increasing their pressure on Maria, hoping to find a way to extract all of her inheritance, either by killing her (by accident, of course) or by find the document establishing her title and altering it. Maria and the Professor and the Lilliputians end up cooperating to mutually save themselves and to send Miss Brown and the Vicar to their deserved fate. All this is intriguing enough (though some of the action is a bit overdone, even tedious): daring escapes and heroic Lilliputian treks across the dangerous miles (as it seems to them) of the estate, with dungeons and vile punishments and locked rooms etc.

The real joy, though, at least for an adult reader, is the comical asides. The Professor is the ur-Absent Minded Professor, obsessed with figuring out the mean of obscure Latin words. The Cook is a sweet old lady with her own ideas about treatment of little girls. There is a Lord Lieutenant obsessed with horses who gets an extended comic segment involving the various toy horses he uses to dispense his cigars and candy etc. The various Lilliputians are nice individuals with their own comic aspects. And there are constant hilarious references to the history of the estate, and the many famous individuals who stayed there. (Those alert to English history will recognize allusions to, for example, the Duke of Marlborough (for example, one of Marlborough's great victories was at the Battle of Malplaquet. My actual knowledge of Marlborough is mostly derived from Thackeray's Henry Esmond, and may be distorted, as Esmond (and presumably Thackeray) disliked him.) This is a book I think I'd have loved had a discovered it as a child; and that I greatly liked discovering it late in life.