Potential Hugo nominations for the 1959 Hugos (stories from 1958)

One more post about potential Hugos from 1950s conventions: this one for 1959, so that stories from 1958 were eligible. This was the first year that the dates of eligibility were essentially standardized. (A couple of minor tweaks were made later.) Thus, as of the 1959 Worldcon, stories from the previous calendar year (defined by publication date for novels, and cover date for stories from magazines) were eligible. Also in 1959, a formal nomination process was established, and a final ballot was issued. (Prior to this, there were tentative moves in this direction a couple of the conventions.) One thing that was not standardized was the short fiction categories. (Also, I'm not sure if the novel length limit had been set.) That didn't settle down until the early '70s, probably partly under the influence of the Nebula Awards.

I have cited Jo Walton's excellent Informal History of the Hugos before, and in that book you can find Jo's comments on the short lists, her choices for the winners, and comments by a variety of people (myself included) discussing the stories and often offering additional possible nominees or winners. I'll list Jo's choices below, along with Richard Lupoff's short fiction selection from What If, Volume 1. And for the years from 1960 on, I'll leave the field to Jo! (After all, my thoughts are generally recorded in her book anyway.) I've decided to go ahead and make one additional post for stories from 1959, for two reasons: one, to round out the decade of the 1950s by story publication year, not just Worldcon year; and, two, because I was born in 1959.

The 1959 Worldcon was called Detention, and was held in Detroit, MI.

(Note that the 1959 Hugo short fiction shortlists are pretty long, and that novelette and novella are combined. Also note that 1958 was the year magazine distribution collapsed, and there was a decrease in the amount of short fiction published.)

The Enemy Stars aka "We Have Fed Our Sea", by Poul Anderson Hugo Nominee 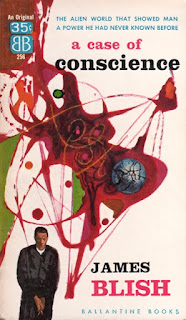 A Case of Conscience, by James Blish Hugo Winner

Who?, by Algis Budrys Hugo Nominee

Have Space Suit, Will Travel, by Robert A. Heinlein Hugo Nominee

The Once and Future King, by T. H. White

The Cosmic Rape aka "To Marry Medusa", by Theodore Sturgeon

War of the Wing-Men aka "The Man Who Counts", by Poul Anderson

The Triumph of Time, by James Blish

The Survivors, by Tom Godwin

The Time Traders, by Andre Norton

The Space Willies aka Next of Kin, by Eric Frank Russell

The Lincoln Hunters, by Wilson Tucker

The Languages of Pao, by Jack Vance

My choice here is still A Case of Conscience, though The Once and Future King would have been an intriguing option. Andre Norton's The Time Traders was one of the first Andre Norton books I read, and it remains in my memory as one of my favorites. Blish's VOR is interesting in part because it's an expansion of a collaboration -- the original short story was written with Damon Knight, titled "The Weakness of RVOG". I note that with Next of Kin (actually a slightly expanded version published in the UK in 1959) and a few other stories that year, Russell essentially packed it in as a writer. (Two more novels followed, The Great Explosion (an inferior expansion of "And Then There Were None") and The Mindwarpers, plus a couple of stories. He was only 60 in 1965, when The Mindwarpers appeared -- I'm not quite sure why he quit. Couldn't have been the pay, could it? :)

"Be My Guest", by Damon Knight (Fantastic Universe, September)

It's a thin novella list (though strong at the top.) I would have to choose the same story the voters picked, "The Big Front Yard". (Jo Walton also agrees.) The Henderson, Vance, and Kornbluth are close to it, though. The Silverberg is there because it's perhaps the most fun early Silverberg novella I read. Richard A. Lupoff's selection for an alternate Hugo was Kornbluth's "Two Dooms".

"Among the Dangs", by George Elliott (Esquire, June)

"Shark Ship" aka "Reap the Dark Tide", by C. M. Kornbluth (A Mile Beyond the Moon) Hugo Nominee

"Rat in the Skull", by Rog Phillips (If, December) Hugo Nominee

In this list I'd pick Chan Davis' "It Walks in Beauty", I think most present day readers would choose "The Ugly Little Boy", and I really don't dispute that. I just think "It Walks in Beauty" is underrated, too little known, and original and moving. Richard Lupoff chose "Unwillingly to School", which is lots of fun also!

Note that Star #4 is the fourth edition of Frederik Pohl's seminal original anthology series, while Star Science Fiction for January was his abortive attempt to turn it into a magazine.

"But Who Can Replace a Man?", by Brian W. Aldiss (Infinity, June)

"A Touch of Strange", by Theodore Sturgeon (F&SF, January)

"The Edge of the Sea", by Algis Budrys (Venture, March) Hugo Nominee

"Or All the Seas with Oysters", by Avram Davidson (Galaxy, May) Hugo Winner 1958

"The Burning of the Brain", by Cordwainer Smith (If, October)

"Try and Change the Past", by Fritz Leiber (Astounding, March)

I would have chosen "The Men Who Murdered Mohammed" (and Jo Walton agrees with me.) The Aldiss story might be second, or perhaps the Emshwiller. Behind that, the next four stories plus the Bloch, Budrys, Davidson, Slesar, Smith, all three Leiber stories, and "Theory of Rocketry" are very very close. Note that Kornbluth had died in 1958, and this was the last we'd see from him, except for the Pohl collaborations that showed up later. Finally, I admit I know almost nothing about the Stanley Mullen, J. F. Bone and Anton Lee Baker stories, which are listed because the Hugo nominators thought them worthy. I have been assured by multiple people that J. F. Bone's "Triggerman" is quite good.