This is the earliest set of potential Hugo nominees for 1950s Worldcons I'll do. I chose this date mainly because it seemed a clean break to posts on 10 years of Hugos -- for the 10 1950s Worldcons. (The 1950 Worldcon was NorWesCon, held in Portland, OR.)

Another reason is that 1949 is a fairly significant year in the transition from the so-called "Golden Age" to the next phase ... the time when John W. Campbell's Astounding slipped from its unquestioned place at the top of the SF heap. For it was in 1949 that the first issue of The Magazine of Fantasy and Science Fiction was published. (That first issue was called The Magazine of Fantasy.) It's also worth noting that by this time the sister magazines Startling Stories and Thrilling Wonder Stories were publishing fiction that was competing with that of Astounding, under the editorship of Sam Merwin, Jr. And, finally, my fairly intimate familiarity with the science fiction of the 1950s doesn't really extend that much before 1949.

And, too, it turns out that there was some very fine SF published in 1949, and it wasn't difficult at all to produce very creditable nomination lists, especially in novel and (thanks to Ray Bradbury!) in short story. 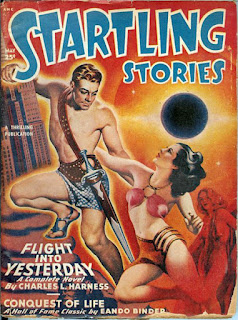 The Sword of Rhiannon aka "Sea Kings of Mars", by Leigh Brackett

The Paradox Men aka "Flight Into Yesterday", by Charles Harness

The Queen of Zamba, by L. Sprague de Camp

The Big Eye, by Max Ehrlich

Red Planet, by Robert A. Heinlein

The Humanoids, by Jack Williamson

Seetee Shock, by Jack Williamson (as "Will Stewart")

I think that's a pretty damn good list of novel nominees. The winner has to be 1984, right? But Earth Abides is a pretty major novel. And the two from the pulps -- "Flight Into Yesterday" and "Sea Kings of Mars", to give them the titles they had on first publication, are novels I truly adore. Finally, I list a book I haven't read, Watch the North Wind Rise, because it looks very interesting. (It's a Utopian novel set in a a future in which technology has been rejected, and worship of the Goddess, in various forms, is encouraged.)

The "other possibilities" are interesting too. I have not read some of these, but I have heard good things -- for instance, about Silverlock. And The Big Eye. And William Temple's novel gets some praise -- though what I've read by him is not so great, and he seems known in great part for being a friend of Arthur C. Clarke. The two Williamson novels are significant in their way, but I haven't read Seetee Shock and I admit The Humanoids disappointed me relative to the pretty good opening novella, "With Folded Hands". Atomsk is an early novel by the man who became Cordwainer Smith -- again, I haven't read it. As for Red Planet -- it's a solid Heinlein juvenile. And The Queen of Zamba is a fun Krishna novel.

Thanks for the comments here and elsewhere about some of the books I hadn't read but mentioned as possibilities -- The Big Eye was one of the first (maybe actually the first) Doubleday Science Fiction book, and it got some exposure outside the field -- for that reason I thought it a prominent novel. But I am assured by some it is quite poor -- others argue for at least competence, and for being the first to bring its now hackneyed concept to a wide audience. As for Williamson's Seetee Shock, I am told it is pretty bad as well. But it is the novel which invented the word "terraform" (which actually appeared earlier in the novella "Collision Orbit", which became part of the Seetee series.)

(I chose Earle Bergey's cover for "Flight Into Yesterday" instead of covers for 1984 or Earth Abides because, let's face it, who wouldn't choose a pulp cover first! :) )

"Gulf", by Robert A. Heinlein (Astounding, November and December)

"Venus and the Seven Sexes", by "William Tenn" (Philip Klass) (The Girl With the Hungry Eyes and Other Stories)

"Enchantress of Venus" aka "City of the Lost Ones", by Leigh Brackett (Planet Stories, Fall)

I suspect "Gulf" or "The Weapon Shops of Isher" would have won back then. I think my vote, now, would be for "Agent of Vega". I don't think it's really a particularly strong set of novellas. "Queen of the Martian Catacombs", by the way, was expanded by a third, and somewhat changed, to the Ace Double half The Secret of Sinharat in 1963 (and the expansion was probably done by Edmond Hamilton.)  Farmer Giles of Ham was published as a book in 1949 -- I doubt all that many readers saw it until The Tolkien Reader came out in 1966.

"The Witches of Karres", by James H. Schmitz (Astounding, December)

"The Lake of the Gone Forever", by Leigh Brackett (Thrilling Wonder Stories, October)

My vote would have to go to "Private Eye" for this Hugo that never was, though "The NRACP" would have been an interesting choice; and "The Witches of Karres" (included in one of the SF Hall of Fame anthologies) is lots of fun. "The Lake of the Gone Forever" is more gorgeous pure pulp from Brackett. The St. Clair story is a madcap romp, also good fun, and I'm amused that when the story was collected in the 1960s St. Clair chose to give it a new title -- in a tribute (I am sure) to her important pseudonym "Idris Seabright".

"Dark They Were, and Golden-Eyed" aka "The Naming of Names", by Ray Bradbury (Thrilling Wonder Stories, August)

"The Long Watch" aka "Rebellion on the Moon", by Robert A. Heinlein (American Legion Magazine, December)

"Delilah and the Space Rigger", by Robert A. Heinlein (Blue Book, December)

"Our Fair City", by Robert A. Heinlein (Weird Tales, January)

"The Hurkle is a Happy Beast", by Theodore Sturgeon (The Magazine of Fantasy, Fall)

Another incredible year from Ray Bradbury. Once again, it's hard to choose a winner, but I think I'd give the Hugo to "The Martian", one of my favorite stories (along with "Ylla" and "The Million Year Picnic") from The Martian Chronicles. But the other Bradbury stories are great, too. And Fritz Leiber was great again -- in 1950 I suggested he should beat out Bradbury for the short story Hugo, but in 1949, though "The Girl with the Hungry Eyes" is excellent, Bradbury was better.