Here's my plan for the rest of these 1950s Hugo posts -- to round it off neatly, I'll end up doing one for each Worldcon of the 1950s, meaning stories from 1949 through 1958. I hadn't planned to do one for 1959 as that was the first year that eligibility was restricted to stories from the previous calendar year, and that there was a codified nomination process. The rest of these posts have been aimed at filling in years that didn't have fiction Hugos, either because there were no Hugos, or no Hugos in certain categories, or because the quirky eligibility rules meant that worthy stories were missed. 1958 was well represented at the 1959 Hugos, and so I wasn't going to bother, but I'll go ahead and do a post just to wrap up the '50s Worldcons, as it were. I also can't overemphasize that anyone interested in Hugo history should be reading Jo Walton's An Informal History of the Hugos. Therein Jo discusses the winners and nominees, and potential alternatives, in all the categories (not just fiction), and also includes a number of essays discussing particular Hugo-winning books at length. Anything I write here is superfluous compared to what you can find in her book -- the hope is only to fill in some thoughts on the sparser early years of the Hugos.

The 1952 Worldcon was Chicon II, in Chicago, the tenth World Science Fiction Convention. (This year will be Chicon 8!) As noted, they gave no Hugo awards. The International Fantasy Award went to John Collier's Fancies and Goodnights, a remarkable book, though as a story collection not eligible for a Hugo in this or any year. There was also a non-fiction award, to The Exploration of Space, by Arthur C. Clarke.

The Sands of Mars, by Arthur C. Clarke

House of Many Worlds, by Sam Merwin, Jr.

The Starmen of Llyrdis, by Leigh Brackett

The Moon is Hell, by John W. Campbell, Jr.

The Hand of Zei, by L. Sprague de Camp

The Puppet Masters, by Robert A. Heinlein

The Tritonian Ring, by Fletcher Pratt

The Weapon Shops of Isher, by A. E. van Vogt

Between Planets, by Robert A. Heinlein

Comet in Moominland, by Tove Jansson

Huon of the Horn, by Andre Norton

On the whole, what a dispiriting set of novels. I might vote for The Sands of Mars, which I enjoyed, though I haven't reread it in a long time. Alternately, I suppose Foundation is the most significant "novel" on the list, though I downgrade it as essentially a selection of stories from several years earlier, only "eligible" due to the (rather weak) opening section ("The Psychohistorians") which was written especially for the book. I suspect back then the winner might have been The Weapon Shops of Isher. Van Vogt just doesn't do it for me, but he's important to the field, and I can see why the final line of the "sequel" The Weapon Makers ("Here is the race that shall rule the sevagram.") thrilled readers. Of the YA novels, Huon of the Horn is possibly the very earliest Andre Norton I read, maybe only at age 10 or so, but I remember loving it. 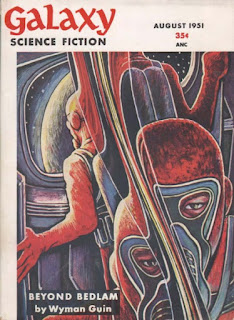 "... And Then There Were None", by Eric Frank Russell (Astounding, June)

"The Virgin of Valkarion", by Poul Anderson (Planet Stories, July)

"A Stitch in Time", by Sylvia Jacobs (Astounding, April)

"... And Then There Were None" is the Science Fiction Hall of Fame story here, and it's a good story, and of course "The Fireman" is the first version of Fahrenheit 451, also very good: but my vote goes without hesitation to the more adventurous, more unusual story, Wyman Guin's "Beyond Bedlam"; which is truly brilliant. It's a story that has never precisely been forgotten -- it was immediately anthologized in the first Galaxy Reader, and again in the Amis/Conquest Spectrum II, and later in Robert Silverberg and Martin H. Greenberg's Arbor House Treasury of Great Science Fiction Short Novels -- but though it has a mild reputation it deserves even more -- among other things it achieves real tragedy.

Beyond THAT, I confess again my fondness for ancient unserious but fun pulp by citing the two glorious planetary romance stories by Poul Anderson, and Jack Vance's little known "Maxos", to say nothing of Leigh Brackett's classic "Black Amazon of Mars", which was later expanded and radically altered (probably by her husband Edmond Hamilton) into the Ace Double half People of the Talisman.

"Bettyann", by Kris Neville (New Tales of Space and Time)

"The New Prime", by Jack Vance (Worlds Beyond, February)

"Breeds There a Man", by Isaac Asimov (Astounding, June)

"The Universe Between", by Alan E. Nourse (Astounding, September)

There was a time the obvious choice might have been "The Marching Morons" (an SF Hall of Fame story) but for me its eugenicism (and concomitant bad genetic science) as well as the way its cynicism has curdled have soured the story. I think now that "Angel's Egg" should be the winner. The author of "Dune Roller" is Julian May, then married to anthologist T. E. Dikty, who had a slow burning writing career until it exploded with The Many Colored Land. "Casting Office" would have been a good nomination possibility as well. (John Boston recently reminded me of this story.) "The Universe Between" along with "High Threshold" were years later turned into the YA novel The Universe Between, which wowed me at age 12. "Second Dawn" is another story I recall thrilling me at age 12. "Venus Mission" is a better than expected J. T. M'Intosh story -- exciting adventure, with a female character with real agency (undermined as usual by M'Intosh's conventional sexism.) The Anderson story, as I recall, is the first to feature Merseians. The Sturgeon story, despite its lurid title and lurid premise (giant women in another dimension), is actually not bad. John Boston suggested Bernard Wolfe's "Self Portrait", a cynical story about advances in prosthetics and artificial intelligence and their likely actual uses (including voluntary amputation and war by computer (as borrowed in a Star Trek episode), by the author of the still-remembered Limbo, a true SF novel published in the mainstream and called by J. G. Ballard the best SF novel of its time.

"A Pail of Air", by Fritz Leiber (Galaxy, December)

"The Man Who Sold Rope to the Gnoles", by "Idris Seabright" (Margaret St. Clair) (F&SF, October)

"Of Time and Third Avenue", by Alfred Bester (F&SF, October)

A pretty good set of short stories, I think. Once again I'm torn -- Bradbury's classic, Boucher's SF Hall of Fame story, and Seabright's mordant piece all strike me as worthy winners. Merril's story has the most pointed message, but isn't as well developed as a story. The whole list of other possibilities are, I think, on nearly the same level, and any of them would have made a good nominee.