Obscure Classic Anthology: In the Wake of Man, edited (uncredited) by Roger Elwood

Obscure Classic Anthology: In the Wake of Man, edited (uncredited) by Roger Elwood

Roger Elwood published about 60 anthologies between 1964 and 1978, with more than 40 of them appearing in the three years from 1973 through 1975. This sudden outpouring, and its sudden cessation, led to a narrative that suggests that Elwood saturated the SF anthology market to an unhealthy degree in that period, and that that glut of books largely ruined the market. Elwood was also criticized for the low quality of his books, and for shady editorial practices.

I have felt for some time that these criticisms are overblown. Jonathan Strahan did a study of the quantity of anthologies published over time, and showed only a slight and temporary effect of Elwood's boom and following bust -- over time, the number of original anthologies stayed fairly constant. His editorial practices can fairly be criticized on a couple of grounds -- he was somewhat prudish, and apparently uncomfortable with depictions of homosexuality, or indeed with much sexual content at all. His series of novels, Laser Books (an imprint of Harlequin) did impose strict content restrictions, including a requirement for a happy ending, and very specific length restrictions. (It should be noted that these were not dissimilar to Harlequin's usual rules for their Romance novels.) Some have accused him of cheating authors -- if in fact this happened, of course it was wrong, but I have not seen any direct evidence of this.

The more interesting complaints, to me, concern the quality of the stories he published. I was buying books at that time, and I bought a lot of Elwood paperbacks. And I found them -- okay. They weren't great books, mostly, but they featured some good stories, among some mediocre stories, and some clunkers. As such they were comparable to -- I'd say, actually, somewhat better than -- Martin H. Greenberg's similarly massive outpouring of anthologies in the early 2000s. In no way were Elwood's books equal to the great anthology series of that era -- Orbit, New Dimensions, and Universe -- but they fit nicely at the next tier. He published a lot of new or unfamiliar writers, and regularly published some of the best writers of that time -- the likes of Gene Wolfe, Barry Malzberg, Edgar Pangborn, and R. A. Lafferty, for example. And a few of his books were a cut above. One example is the Continuum series -- four books each containing part of a series of stories by the same writers from book to book. Another example is his massive collaboration with Robert Silverberg, Epoch. And this book, In the Wake of Man, is a third example. 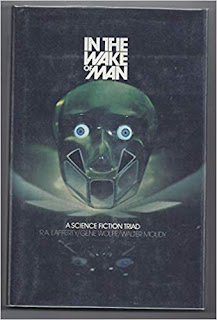 It's a theme anthology of three novellas. The theme is, more or less -- what will come after man? The three stories all treat this theme in striking fashion, and in different ways. And they are all strong stories, with one of them a true classic. Two of the authors are all time greats, and the other is an obscure writer, who only published one SF novel and four shorter works. Herewith I'll discuss each story.

This is Lafferty at his most Lafferty-esque, to a fault at times, especially as the story opens. But by the end it coheres, and gains considerable power. It is set in New Orleans, some long time in the future, though none of this is at all clear at first, or for a very long time. We are introduced to an array of Lafferty eccentrics ... the stubborn and malodorous Zabotski ("He's about the last of them", people say, and only by the end do we understand), Margaret Stone, Mary Virginia Schaeffer, Absalom Stein, and, perhaps most importantly, Melchisedech Duffey, a very long lived person who owns an establishement called the Walk-In Art Bijou. This place has been overtaken by an organization called "The Society for Creative History" or "The Royal Pop Historians". Duffey doesn't know how this happened, and seems powerless to stop it, even as he notices that buildings seem to be mysteriously appearing and disappearing.

The story continues -- rambles, of course it rambles, it's Lafferty -- as the people of this city attend the Pop History presentation (learning, for example, how to uncover past history as preserved in rocks) and discuss what's happening with each other and with some of the Pop historians. As with any Lafferty story, you need to be open to just absorbing his divagations, his wild descriptions, the strange events never explained; and to accept -- indeed revel in -- his elaborate tall-tale derived prose. And as we read on, more and more becomes clear, and indeed little things we saw at the beginning suddenly take on new meaning, such as the advertised Pop History topic "It Doesn't Matter, They're only Human". And, indeed, we learn that most of the characters -- certainly all the Pop Historians -- are not human, but some strange successor (?) species, perhaps imitating humans, and they are engaged in at last ridding the world of the malodorous unpleasant stench of Humanity.

In a curious way, I was reminded of a very different story, Samuel R. Delany's The Einstein Intersection -- not in theme at all, but in presenting what seem aliens impersonating -- in some fashion -- humans. This is just a passing resemblance, not truly a parallel, but it does seem to me that The Einstein Intersection fits the theme of this anthology very well. Also, I should mentioned that this story is part of Lafferty's extended Argos Mythos, in which one of the main characters is Melchisedech Duffey. It has not been reprinted in this form, but it seems to be part of one of the published Argos novels (More Than Melchisedech) and I suspect that in that context it will read somewhat differently thematically. (The only part of that long series I have read is The Devil is Dead, so it is hard for me to discuss it coherently.)

"Tracking Song" is one of Gene Wolfe's great novellas -- like several SF writers (Damon Knight and Kim Stanley Robinson are other examples) Wolfe was magnficent at that length, and he wrote a great many of them. It's also one of his strangest and most difficult stories. Gardner Dozois used to say (in print and in person -- I heard him!) that he and Michael Swanwick spent an hour or more trying to figure out what really happened in "Tracking Song" and decided they'd failed. Me too, pretty much -- but it's still worth the effort.

The story is told by a man called "Cutthroat" -- because he has a scar across his throat. He is living with a group of primitive people, who picked him up after finding him in the snow, shortly after the Great Sleigh passed by. He is telling his story into a recording device he has. It's clear his technology is advanced far beyond that of the people he is with. It's a cold place, and the Sleigh leaves tracks -- and Cutthroat decides to follow them.

Soon we realize (or should, perhaps on first reading it takes longer) that Cutthroat has been abandoned by the Great Sleigh, and the people he is with are actually uplifted animals. The Great Sleigh appears to continually circumnavigate this world, which seems much smaller than Earth. (Some readers suggest Mars (there are two moons), though to me it seems even smaller, perhaps an asteroid somewhere?) Cutthroat leaves the first group he is with, who seem to be wolf-derived, to try to catch the Great Sleigh. In the process he encounters a variety of different uplifted animals -- derived from pigs, deer, minks, birds ... He learns soon that the people of the Great Sleigh have revealed some things to the inhabitants of this world -- the world is warming, for one thing, and there are laws they must follow (though few do) -- particularly, they should not eat the meat of any intelligent being. (But the predator species still eat the prey!) A key person he meets is Cim Glowing, a woman who seems to be mink-derived. She is kidnapped and taken, leading to a key episode underground, in a city inhabited largely by robots of some sort, as well as some part-metal people, and one person, Mantru, who might be the "last man".

I don't want to keep synopsizing -- Cutthroat rescues Cim Glowing, fights Mantru, is seriously wounded, and back on the surface, keeps following the Great Sleigh, finally reaching it -- but perhaps on the point of death. The ending is obscure, perhaps transcendent, perhaps simply tragic (for Cutthroat, at least.) And what is really going on? My best guess, informed to be sure by reading several online discussions and listening to a couple of podcasts, is that humans -- possibly dying out, possibly simply unable to inhabit this particular world -- have done some degree of terraforming, and uplifted a variety of animals, and hope to leave the world to a cooperative group of varying uplifted species. Cutthroat's job -- unknown to him -- is to somehow evaluate the readiness of the uplifted species to be left alone.

It is, as I said, mysterious, strange, evocative, inspiring, frustrating. Wolfe's work remains essential to the SF field, and close examination of not just his great, also mysterious, novels, but his short fiction, remains fruitful

Walter F. Moudy was born in Cassville, Missouri, a very rural town in the Ozarks of Southwestern Missouri, near the Arkansas border, in 1929, and died in Kansas City in 1973, not yet 44 (I believe in a car accident.) He published an SF novel, No Man on Earth, in 1964, followed by three stories in Cele Lalli's magazines, Amazing and Fantastic, in 1965, and a sleaze paperback, The Ninth Commandment (set, by the way, in Kansas City) in 1966. His only other SF story was this one, published after his death. One of his stories, "The Survivor", is well-remembered -- it was anthologized in Judith Merril's best of the year book, and has been reprinted several times since.

"The Search for Man" concerns a child named David Zimmerman, a robot in the far future, with a brain based on a mix of the brain material saved from 12 humans. It seems that humans have died out, but the robots who served them saved the brains of 12 of the best and brightest humans, and since then have made their children (robots do wear out) with intelligence derived from those humans.

David grows up a particularly promising young man/robot, at first an eager adherent to the robot religion devoted to search for remnants of humans and human civilization. But as he grows older, he becomes disillusioned, and realizes that Man is truly dead -- and he becomes the Anti-Man, convinced that robots must throw off the influence of human history and make their own way. He lectures on this theme, until he meets a young woman who disputes his ideas -- she is the daughter of one of the robot religious leaders. David, against his will, is falling in love -- and he is drawn to meet the woman's father, who has a shocking revelation.

The upshot is that David and his lover head to Mars, where apparently a few humans tried to escape the catastrophe on Earth. And on Mars they find the remnants of those people, who live a horribly constricted life underground. David is able to offer them a return to their future Earth -- but the results of this will inevitably wholly change robot society. The resolution is curious -- inspiring in a way, but dark too, for if anything the Martian humans are more robotic than even the robots. But perhaps hey have more room to change?

It's an intriguing and readable story, though also rather silly in places. Moudy, in general, seemed uninterested in scientific plausibility -- his stories and novel could have almost the feel of 1930s SF. But the ideas behind them were solid and ambitious. He's an uneven writer, but his small oeuvre is worth reading.