Continuing my project of suggesting potential Hugo nominees (and winners) for the early years of the Hugos. The 1959 Worldcon was the first to settle on a year of eligibility (the calendar year prior to the year of the Worldcon) and on a nomination process. The nomination process, voting rules, and categories changed quite often over the next 10 to 15 years, before largely settling down, in the fiction categories, anyway. But at least to some extent, things were more comparable to present day rules beginning with the 1959 Hugos, for 1958 stories.

Jo Walton's Informal History of the Hugos didn't really cover 1954, as there were no Hugos that year, though she suggested that Theodore Sturgeon's More Than Human would have been a good novel winner. Richard A. Lupoff, in What If, Volume 1, chose Damon Knight's "Four in One" as a potential Short Fiction winner. And Noreascon 4, the 2004 World SF Cconvention, did award Retro Hugos, and there was a quite a plausible set of five nominees in each of the fiction categories. I've marked the nominees (and winner) with a bolded RH (not to be confused with my initials!) in the lists below. And, finally, I wrote an article for Locus Online back in 2004, suggesting potential nominees in the fiction categories. I've changed my mind some since then, and I also messed up some of the story lengths, but I still like what I wrote, which is here: The Best Science Fiction of 1953: A Look a Potential Retro Hugos.

The Caves of Steel, by Isaac Asimov RH

The Big Jump, by Leigh Brackett

Starman Jones, by Robert A. Heinlein

The Sinful Ones, by Fritz Leiber

The Green Millennium, by Fritz Leiber

You Shall Know Them aka Les Animaux Denatures, by "Vercors" (Jean Bruller)

Bring the Jubilee, by Ward Moore

Children of the Atom, by Wilmar Shiras

The Kraken Wakes aka Out of the Deeps, by John Wyndham

This was a remarkable year for SF novels, and the five that I list as nominees -- the same list the Retro Hugo nominators picked -- are all certified classics in the field. There some impressive alternate choices too -- among those I list, Leiber's The Sinful Ones (an expansion and in my opinion an improvement on his 1950 short novel "You're All Alone") is a personal favorite. In my Locus article I picked The Caves of Steel as the winner, but I'm really torn. Nowadays I might lean to either More Than Human, or to the Retro Hugo winner, Fahrenheit 451.

The Vercors novel, You Shall Know Them, was published in France in 1952 but I list it here for the first edition of its English translation (by Bruller's wife, Rita Barisse). (There were other editions of the English version (the same translation): The Murder of the Missing Link and Borderline.) It's a purposely controversial novel, and hard to take at times, but very interesting. My review: You Shall Know Them. 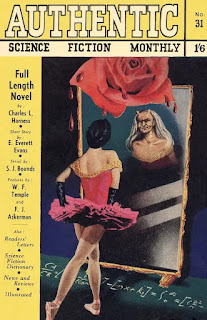 "A Case of Conscience", by James Blish (If, September) RH winner

"Cue for Quiet", by T. L. Sherred (Space Science Fiction, May and July)

In this category my choice for the winner is still Charles Harness's "The Rose", an extremely strange, dreamlike, story of science vs. art. The rest of the ones I list as possible nominees are all strong, though, and any one would have been a good winner.

The "other possibilities" include two solid Poul Anderson stories ("Three Hearts and Three Lions" being a shorter version of the 1961 novel), one of several interesting T. L. Sherred stories from this time frame, an enjoyable but slight very early Brunner story (later reprinted as half of an Ace Double and also as part of his collection Interstellar Empire as "The Space-Time Juggler"), and an important Blish story that I had missed (thanks to Gregory Feeley for reminding me of it) that became part of Cities in Flight. Note the two novellas from the somewhat obscure (but often interesting) Two Complete Science-Adventure Books.

"The Wall Around the World", by Theodore Cogswell (Beyond, September) RH

"Four in One", by Damon Knight (Galaxy, February)

"The Adventure of the Misplaced Hound", by Poul Anderson and Gordon R. Dickson (Universe, December) RH

"Time is the Traitor", by Alfred Bester (F&SF, September)

"The Third Guest" aka "Macario", by B. Traven (Fantastic, March-April)

This is one of those categories  where I had a hard time narrowing down to five nominees. "Earthman, Come Home", "Sam Hall", and "Time is the Traitor" could easily have made my list. I should add that it's a reasonable guess that back in 1954, at least one of those Clifton/Apostolides stories would have been nominated. In my Locus article, I chose "Four in One" as the winner -- and so did Richard A. Lupoff in his What If? anthology. My second choice would probably be the Cogswell story, "The Wall Around the World".

"It's a Good Life", by Jerome Bixby (Star Science Fiction Stories No. 2) RH

"Specialist", by Robert Sheckley (Galaxy, May)

"The Liberation of Earth", by "William Tenn" (Philip Klass) (Future, May)

"Encounter in the Dawn" aka "Expedition to Earth" aka "Encounter at Dawn", by Arthur C. Clarke (Amazing, June-July)

"A Bad Day for Sales", by Fritz Leiber (Galaxy, July; Shadow of Tomorrow)

Long list of stories in this category! I included some more for secondary reasons -- I remain intrigued that the great poet and Dante translator John Ciardi was also an SF enthusiast (and a friend of Asimov's) who appeared in F&SF several times over the years. The Clarke story is the first iteration of the idea behind 2001. Robert Sheckley had an astonishing year, and probably three or four more stories could have been listed. I note that the three stories I do list come from consecutive issues of Galaxy.

Note too the influence of Frederik Pohl as an editor. He published the first two volumes of his Star Science Fiction series of original anthologies, and also a excellent standalone original anthology (Shadow of Tomorrow). Also note that Sturgeon's collection E Pluribus Unicorn featured more or less simultaneous printings of three stories that also appeared in magazines. (I suspect perhaps Sturgeon had sold the stories to the magazines some time before, and publication was delayed enough that the book caught up!)

My choice for a winner in my Locus article was James Blish's "Common Time". I still think that's a good choice, though "A Saucer of Loneliness" is one of my very favorite Sturgeon stories and it would have been a good winner too.