Old Bestseller Review: You Shall Know Them, by Vercors

Old Bestseller Review: You Shall Know Them, by Vercors

Vercors was the pseudonym adopted by French artist and engraver Jean Bruller (1902-1991) for his writing during the French Resistance to German occupation in World War II. Bruller had been invalided out of the French Army prior to the war, then quickly injured when he returned to action, so he turned to writing an inspirational novella, The Silence of the Sea (1942). His work was published by a clandestine press he cofounded, Les Éditions de Minuit -- which was dangerous in itself: his editor for the press was executed by the Nazis. He also served as a messenger for the Resistance.

After the war he continued writing fiction, and continued to publish as Vercors. He published in the neighborhood of 20 books, with a fair amount of success. His name is known to SF fans with some knowledge of the field's history primarily for his 1961 novel Sylva, which became the first work originally published in a foreign language to be on the Hugo shortlist, in 1963 (for the 1962 English translation.) (To this day the only other novels nominated for a Hugo that were first published in another language are Cixin Liu's The Three-Body Problem (which won) and Death's End (jokes about the prose in L. Ron Hubbard's Black Genesis notwithstanding).) Vercors wrote other SF novels besides Sylva, including Colères (The Insurgents), and You Shall Know Them. 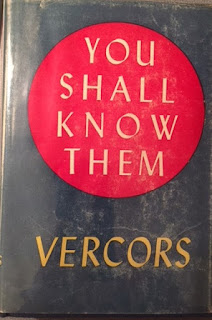 You Shall Know Them was originally published in 1952 as Les Animaux Dénaturés. The English translation appeared in 1953. As with most of Vercors books, the translation was done by his wife, Rita Barisse. The English version also appeared under the titles The Murder of the Missing Link (a rather literal representation of the main point of the novel) and Borderline, which also pretty well represents the ideas of the novel. You Shall Know Them, however (from Matthew 7:16) is a much subtler and more serious title. To add yet one more title, the book was made into a 1970 film, Skullduggery, starring Burt Reynolds. (Mark Tiedemann has seen the film, and says it's better than you'd expect, though Reynolds complained that the director ruined a pretty good script.)

You Shall Know Them is a distinctly philosophical novel, with a satirical edge, and some very interesting ideas. It is marred by some quite racist passages, even though its central message is mostly anti-racist. The novel also is centrally concerned with anthropology, particularly the ancestors of modern humans, and as such its science is terribly out of date. That said, I think Bruller gets the science as of 1952 pretty much correct. Alas, he mentions Piltdown Man -- a hoax that was exposed only in 1953!

The book opens with a shocking scene -- a doctor is called to a man's home, where he is shown the corpse of a newborn child. The man tells the doctor that he has killed the child with strychnine, and insists that he verify the death, and call the police. The doctor notices some strange features to the child -- apelike features -- but he writes the death certificate, and calls the police.

We flash back a couple of years, to the romance of the murderer of the newborn child, a journalist named Douglas Templemore, and a writer named Frances Doran. They meet cute, and soon are spending a great deal of time together. (This is in London -- and indeed England is the main setting of the novel (with a significant side trip to Papua New Guinea), despite the author being French.) They convince themselves they are just friends -- they are both too sensible to fall in love -- until Douglas decides to accompany his anthropologist friends the Greames to New Guinea. (Mrs. Greame, significantly, is a girl he grew up with who surprised everyone by marrying a much older man instead of Douglas.) At this time Frances and Douglas abandon pretence and admit they are in love, though now they must wait a year or so until Douglas returns.

They are in New Guinea to investigate some intriguing hominid bones a colleague has found. But they find something much more fascinating -- living hominids, which they eventually call Paranthropus, or "Tropi" for short. These have a language, though very simple, and they make tools (hand axes), and they bury their dead. Over time, indeed, they are portrayed as very nearly straddling any plausible line between "human" and "animal". (To be sure, it is acknowledged that any such line is hard to place.)

The story gets out, of course, and then it turns out that the area the Tropis live in is owned by an Australian mining concern. The mines are played out, but the CEO has another plan -- use the Tropis as very cheap labor, to corner the market for finished Australian wool. After all, by law, his company owns these "animals" outright. Douglas and his company are appalled, and they try to get the Tropis declared legally human. But this seems legally difficult. The next plan is to artificially inseminate some of the Tropi females with human sperm -- all Douglas', as it turns out -- which leads to several live births. But this is not conclusive either -- for what about mules? (Or many other cross-species hybrids.) Douglas' last chance attempt is what we saw at the opening -- to murder one of his children, and confess, so that the legal system will convict him of murder, implying that the Tropis must be human.

This leads to an extended trial, presided over by a wise judge. Numerous arguments are advanced on both sides, all converging on the notion that the Tropis are on the exact dividing line between humans and animals. (Indeed, it is suggested, some Tropis are on one side, some on the other.) This is where the book advances some pretty offensive notions -- suggesting that there is an hierarchy of human races, some of which are more nearly animal than others. (The book is ardently opposed to different treatment of the so-called "lesser races" to be sure, but the distinctions are still quite blithely advanced.) On the personal side, all this is quite wrenching to Frances in particular, who has married Douglas finally, and who supports him despite some misgivings. (Douglas' affair with Mrs. Greame is an issue as well!)

The resolution involves some legal hair-splitting, and a fairly logical resolution to the issue of Douglas' murder charge. (It was the solution I had come up with myself.) Frances' reaction to the whole thing is pretty well portrayed.

It's a pretty interesting novel. The philosophical arguments are intriguing, a mix of wrongheadedness (in my view) with some interesting dilemmas. (Certainly these are the kind of arguments that (understandably, really) drive many people to vegetarianism.) There is a strong satirical side to the depiction of the wider public's reaction to the whole affair. The characters are well-done too. I liked it, and I think it still deserves attention, albeit as rather a period piece.
Posted by Rich Horton at 8:00 PM