This post will discuss potential Hugo nominees, and winners, published in 1956. According to present day rules, stories published in 1956 would have been eligible for the 1957 Hugos. However, there were no fiction Hugos in 1957. According to the rules in place for the 1956 Hugos, stories from June 1955 through June 1956 were eligible, and in fact the 1956 winners included two stories from 1956 (the novel winner, Double Star, and the novelette winner, "Exploration Team".) In the lists below, I've marked 1956 Hugo nominees with a *.

As ever, I'll mention Richard Lupoff's Hugo choice for 1956, from his anthology What If? Volume 1: "The Man Who Came Early", by Poul Anderson.

The Naked Sun, by Isaac Asimov

The Stars My Destination aka Tiger! Tiger!, by Alfred Bester

They Shall Have Stars, by James Blish

The City and the Stars, by Arthur C. Clarke

Double Star, by Robart A. Heinlein*

Under Pressure, by Frank Herbert

The Death of Grass aka No Blade of Grass, by John Christopher

The Man Who Japed, by Philip K. Dick

The Door Into Summer, by Robert A. Heinlein

The One Hundred and One Dalmatians, by Dodie Smith

To Live Forever aka Clarges, by Jack Vance

Actually this is quite a decent set of novels, and I stretched the nomination list to six, and actually the John Christopher and Jack Vance novels, and even The Door Into Summer, could have displaced a couple of my nominations. I list Pincher Martin, a novel I like a great deal, because it's technically fantasy (I won't say in what way because that might be a spoiler) but I think it's more usefully regarded as contemporary fiction. Dodie Smith's children's book is great fun, but only peripherally fantastical, though the sequel, The Starlight Barking, is explicitly SF. (Alas, I greatly dislike The Starlight Barking.) The City and the Stars, of course, is an extensively rewritten version of Clarke's first novel, Against the Fall of Night, but I sometimes prefer the earlier version. (And one might as well read both -- the differences are quite significant.)

Double Star won the Hugo in 1956, and I like it a lot; but -- and I don't think this will surprise anyone -- my easy, slam dunk, choice for the 1957 Hugo (had I had a chance to vote two years before I was born!) would be The Stars My Destination. (In reality, its eligibility rests on the technicality that the UK edition, Tiger! Tiger!, appeared in 1956. The US serialization, in Galaxy, didn't conclude until the January 1957 issue (which of course could be read in 1956) and the book appeared a couple of months later.) 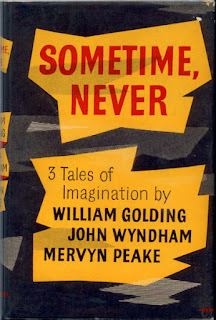 "The Shores of Night", by Thomas N. Scortia (The Best Science-Fiction Stories and Novels: 1956)

This list of potential novella winners is interesting to me. I list three from a single, quite remarkable, volume, Something, Never, which featured striking works by three British writers. The Scortia story seems to have appeared first in Ted Dikty's Best of the Year volume!

If there was a separate novella category at that time, I suspect "Plus X" would have won. My choice would have been ... I don't know! Maybe "Consider Her Ways"? Maybe "Bodyguard", a now obscure story that I quite liked. Maybe "The Ties of Earth", a very unusual departure for James Schmitz -- not really a great story, kind of a mess, but -- interesting.

"The Man Who Came Early", by Poul Anderson (F&SF, June)

"The Dead Past", by Isaac Asimov (Astounding, April)

"A Time to Survive" aka "Seeding Program", by James Blish (F&SF, February)

"Volpla", by Wyman Guin (Galaxy, May)

"The Man Who Ate the World", by Frederik Pohl (Galaxy, November)

"The Skills of Xanadu", by Theodore Sturgeon (Galaxy, July)

The nomination list I give has to be one of the greatest possible sets of five novelettes in a single year. How to choose even one? Especially between the three best, three of the truly best stories in SF history: "The Man Who Came Early", "The Dead Past", and "And Now the News ...". In 1956 "Exploration Team" won -- and it's a nice enough story, and something in me is glad Murray Leinster (Will Jenkins) won a Hugo -- but how in the world could the voters have picked it over "The Dead Past"? (I would guess "The Man Who Came Early" was considered a short story, and "And Now the News ..." was too late in the year. Of the others listed, at least "Stranger Station" and "The Minority Report" could easily have made my nomination list.

My winner? ... Gosh, any of those top three would be good. I'll go with "And Now the News ..." today -- might choose either "The Dead Past" or "The Man Who Came Early" tomorrow.

"A Work of Art" aka "Art-Work", by James Blish (Science Fiction Stories, July)

"The Anything Box", by Zenna Henderson (F&SF, October)

"The Country of the Kind", by Damon Knight (F&SF. February)

I think the clear winner here is "The Country of the Kind". "The Last Question" is a story lots of people love, but for me it's just a gimmick story. "The Anything Box" might be number 2 on my list.

In 1957, with just two categories, "The Man Who Came Early" might have been a short story, and it would get my vote -- and if I cop out and claim "And Now the News ..." isn't really SF, then I can give the Novelette (in those days, typically, "story over 10,000 words") award to "The Dead Past". How's that for waffling?