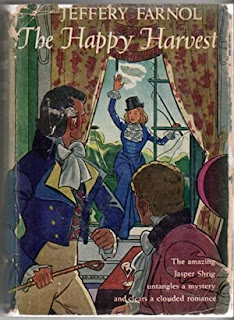 Very early in my "Old Bestseller" project I reviewed Jeffery Farnol's Guyfford of Weare. It's an enjoyable novel, and so are the two that made Farnol's reputation, The Broad Highway and The Amateur Gentleman. Over time I've picked up a couple further Farnol novels, and I've just read a later one, from 1939, The Happy Harvest. Sad to say, it doesn't really work as well as those other novels.

John Jeffery Farnol (1878-1952) was born in England to a metal worker, and trained as an artist. He married an American girl in 1900 and they lived in the US for a while. Farnol worked as a scene painter at first, then turned to writing. His first novel appeared in 1907, and his first big success was The Broad Highway in 1910. He moved back to England around this time. He was a very popular writer (and indeed The Broad Highway was the bestselling book in the US in 1910), best known for romances, often set during the Regency (though some novels were contemporary and some set in other historical periods.) Farnol was a significant influence on the supreme writer of Regency romances, Georgette Heyer, who was a generation younger.

The Happy Harvest fits into two separate sequences of novels. It is the middle book in a loose trilogy, with The Crooked Furrow (1937) and his last finished novel, Waif of the River (1952). (One more novel was substantially written by his wife from his notes following his death.) It is also one of a number of novels featuring the character Jasper Shrig, a Bow Street Runner who solves murder mysteries in many of these books.

The events of The Happy Harvest take place about a decade after The Crooked Furrow. That book concerns two cousins, Roland Verinder and Oliver Dale. Their uncle proposes that they each live on their own means for a year to prove their worth, and they fall in love with the same girl, and have adventures, and Oliver ends up rescuing two young children from a life in the streets, while Roland wins the girl. As The Happy Harvest opens, Oliver, in his late 30s by now, is looking forward to the two children he rescued, Clia and Robin, who are now about 20, marrying each other. Clia, however, has other ideas. She has long planned to marry Oliver (shades of Heinlein's The Door Into Summer.) For that matter Robin, if basically a good sort, is rather rackety and undisciplined.

Complications ensue when a particularly nasty local man turns up murdered. This man had gotten another girl pregnant and abandoned her, leading to her suicide. He tried to rape Clia, though she escaped. Soon after he is found dead, and Robin is immediately the chief suspect. He escapes to London, and to Oliver's Aunt Rosamund, who runs a home with the object of helping the poor. Oliver, after some waffling, realizes that Robin must be innocent, and he asks his old friend Jasper Shrig to investigate. Meanwhile, Clia, already rattled by the realization that she wanted her potential rapist killed, is devastated to learn from a blackmailer that her father was also a murderer and her mother a suicide.

There's not a ton of suspense, really. We know from the beginning that Oliver truly loves Clia and will submit to her desire that he marry her; and that Jasper Shrig will learn that she is not actually the daughter of a murderer; and that Jasper will also learn who really killed the bad guy. The solution to the latter mystery is pretty guessable. And to be honest I was really bothered by the book's tacit endorsement of Clia's belief that if her father (whom she never knew) was a murderer, so she must be as well. (To be fair, Aunt Rosamund opposes this belief, but no one else seems to.) Oliver and Clia are enjoyable characters I suppose, but not as interesting as say Sir Richard and Helen D'Arcy in Guyfford of Weare. And Robin, as well as cousin Roland, are rather tiresome and implausible. In his best books, Farnol's dialogue is pretty sparkling, but that's not really true here. Finally, the structure of the novel is partly built on a conceit -- that Oliver is writing it as the events unfold. This doesn't really hurt the novel too much, but it does seem strained.

So, this seems a minor part of Farnol's oeuvre. It's not terrible, but it's far from great. I'll still likely try a few more of his books, though.