I encountered Joan Aiken's The Wolves of Willoughby Chase and its sequels, such as Nightbirds on Nantucket, as a preteen and read them with delight. But I didn't really understand at that age that she was also a prolific writer for adults. I did read some of her sister Jane Aiken Hodge's romantic thrillers a few years later, and I knew that Joan and Jane and even their brother Branwell -- er, no, that's unfair, his name was John! -- were following in the footsteps, so to say, of their father Conrad Aiken, a Pulitzer Prize winning poet. John and Jane were born in the US, but Conrad and his first wife Jessie moved to England in 1921, and Joan was born there. Each of the Aikens seemed to have a foot in each of the US and the UK throughout, though perhaps Joan was more completely a British writer. She was born in England in 1924, and her parents divorced in 1929, her mother remarrying in 1930. Martin Armstrong (who also wrote some fantastical stories) became Joan's stepfather. Joan Aiken died in 2004.

I jested about John Aiken's status, but it's fair to say, I think, that he was the least known of the Aikens. Interestingly, he published early stories in Astounding and New Worlds, but later largely abandoned the SF field, until a couple of novels around 1970. Jane wrote a lot of a enjoyable romantic adventure, and a biography of Georgette Heyer. And Conrad won the Poetry Pulitzer -- but despite Conrad's early success as a poet, I think that by now his name is remembered but his poetry seems largely forgotten. And now that they all are dead, it is probably Joan Aiken whose latter day reputation stands highest. Her exceptional YA fiction -- the Wolves series primarily --  is her major legacy. But she also wrote a great many nice short stories, many collected posthumously in two volumes from Kelly Link and Gavin Grant's Small Beer Press publishing venture: The Serial Garden, and The Monkey's Wedding. It seems that her quite extensive short work may be her best -- the two books I mention above are all I've read but they are outstanding. 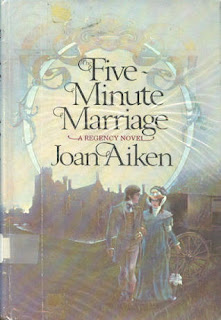 Her adult novels aren't as well known, I think. But some time ago I picked up an ex-lib copy of The Five-Minute Marriage, from 1977. This is a Regency romance; and it's a good example of the genre as it was in the 1970s. By good I mean both truly exemplary -- it exhibits the silliness of many of those novels back then (and now!) though also, as was traditional back then, there is no sex. And by good also I mean that if you can ignore the implausibilities it is pretty enjoyable.

The heroine is Philadelphia (Delphie) Carteret, who lives with her mother and teaches music to wealthy children to make ends meet. Her mother's health is shaky, and their economic position is perilous, for Mrs. Carteret, a widow, has been estranged from her family, even though her uncle is the Sixth Viscount Bullington.

One of Delphie's students is the daughter of a rich widower, not an aristocrat (he actually made his own fortune), and he learns of their straits and realizes he actually has made the acquaintance of Lord Bullington. He writes a letter of introduction and convinces Delphie to visit her Great Uncle and convince him to give her mother the very small income that seems fair. And Delphie makes the trip, in the company of a flighty young woman whose family owns the shop above which the Carterets live. The trip seems at first a disaster, as her young friend makes a scene by falling into the Bullington's moat. They encounter the two rather forbidding young men staying there -- in particular her second cousin Gareth Penistone, Lord Bullington's grandson and heir. But it turns out that Lord Bullington is about to die, and he has insisted that Gareth marry his great-niece or else he'll give away his fortune. The woman Gareth believes is his second cousin, a certain Elaine Carteret, cannot make it to the Bullington manor in time, so Gareth makes Delphie an offer -- she will pose as Miss Carteret, and marry Gareth, in exchange for a promise of a competence for Delphie's mother. All this is absurd, of course, but fun -- for of course Gareth is actually marrying the woman he should -- the other Miss Carteret is clearly an imposter.

Any reader of romance novels knows where this is going from here! And so, I trust, do all of you. But the novel takes its enjoyable time getting there, setting up a bit of a mystery, establishing Gareth's character nicely, giving Delphie (and her mother!) alternate potential husbands, introducing a huge array of cute children, and resolving things with a fairly Gothic climax.

What can I say? There is nothing much plausible about this novel, but I thought it plenty of fun. The leads are worth rooting for, the comic relief is nice, the mysterious aspects, easily guessable as they are, are still intriguing. It's nothing special, but it's good entertainment. Of course I'll take just about any Georgette Heyer novel before it, but among the many many other Regencies I've read, this ranks in the upper 10 percent or so.