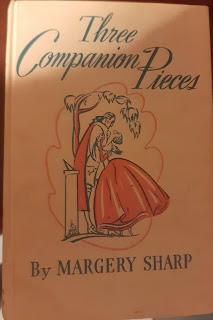 In this space I have recently reviewed two of Margery Sharp's early novels in their reprints from the much to be celebrated Furrowed Middlebrow imprint of Dean Street Press, Rhododendron Pie and Harlequin House. As a result I want browsing through Sharp's early books and came across a much less well-known one, perhaps partly because it's slightly out of her usual way. This is Three Companion Pieces, a collection of three novelettes published in book form in 1941. As far as I can tell, it's been out of print for a very long time.

The "three companion pieces" are three novelettes (or novellas), all set in the 19th Century. They are all romances, in that they are about men and women falling in what might be called love, but they are not quite traditional, and indeed in each case to some extent they are mocking, or criticizing, the conventions of romance stories. And, in fact, two of them end quite sadly. The stories are "The Nymph and the Nobleman" (1932, about 14,000 words), "Sophy Cassmajor" (1934, about 15,000 words), and "The Tigress on the Hearth" (1941, about 22,000 words.) At first I thought these were magazine stories, but on closer examination, as best I can tell, the first two were originally published as very slim separate volumes. I believe (though I can't be certain) that "The Tigress on the Hearth" first appeared in Three Companion Pieces in 1941, but it had a later slim edition of its own, in 1955.

In all these editions, including the omnibus volume I have, there are illustrations, by Anna Zinkeisen. The illustrations are fairly simple but quite nice. Zinkeisen (1901-1976) was a Scottish painter, best known for portraits and illustrations of medical scenes (she served as a nurse during the Second World War.) Among her portrait subjects were Prince Philip, and Sir Alexander Fleming (discover of penicillin.) She also did murals, and of course book and magazine illustration. Her sister Doris was also an artist.

So, to the stories. "The Nymph and the Nobleman" concerns Sir George Blunt, a young and fairly dense Englishman on his "Grand Tour". He is in Paris and quite bored when he happens to see a ballet performance, and he immediately falls in love with the head dancer. He arranges to meet her, and she gets the sense that he wants to have a bit of a dalliance, which is all in the usual way of things for her and so she agrees. He carries her off to England, and to her shock she realizes, despite the language difference, that he means to marry her. To her even greater shock, his mother makes no opposition to the marriage! This is where the story breaks with romantic cliche -- for it is quite clear that this alliance is not a love match, and not appropriate at all. And the second half of the story deals fairly realistically with the logical outcome -- George is a clod who has no idea how to take care of his wife, nor even any interest in her; and the dancer is oddly innocent, unable to resist this marriage but terribly sad and neglected, deprived even of her art. The ending is inevitable and quite sad. Sharp's light satirical touch is here, and for a while the story has all the delight of her more contemporary novels; but the conclusion -- while honest and effective -- is in quite a different meter. 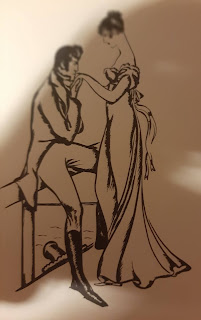 "Sophy Cassmajor" tells of the journey from England to India, sometime in perhaps the middle of the 19th Century, of the title girl, only 17 and rather silly. She is going to India to marry an older man, a friend of her father's, and the man seemed nice enough when Sophy met him, so she doesn't seem to mind yet. She has a maid, a farm girl from her neighborhood, who was jilted by the blacksmith, and in something of a premonition, the maid dies of what seems to be heartbreak. Sophy, now chaperoned by a Frenchwoman, Madame Tricoche, meets one of the ship's officers, a fine young man. Soon enough, they think themselves in love -- and perhaps they are! And Madame is not the sort to stand in the way of young love, even if her charge is technically engaged to another.

Again Sharp is setting up a traditional romance plot, only to upset it. The upset in this case is due to a storm, not to the interference of her family, or her future husband, and Sophy's reaction is perhaps the point of the story, or perhaps the point is simply that sometimes bad things happen. Again I feel that Sharp quite appropriately works out the story in the logical, and not romantic, way, which I think is her point.

Finally, "The Tigress on the Hearth" opens in Albania, with another young Englishman of the Victorian era touring foreign lands. Hugo Lutterwell, however, has manage to get himself in serious trouble, and an Albanian man is trying to kill him. All would be lost, but suddenly a young Albanian woman shows up and knifes the man -- and she and Hugo flee to Hugo's ship. Kathi is her name, and she has decided she is in love with Hugo. And she is a very fine figure of a woman, and Hugo is not entirely displeased ... so they return to England, and they get married, and, as Sharp says archly "at night Hugo found Kathi to be everything a wife should be". 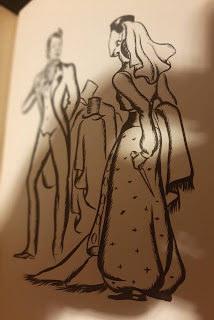 Hugo's family, who have been told a very inaccurate story of how Kathi saved his life, gladly welcome her, and soon the couple are set up well, and children come. And in a while Hugo is in line to be the next MP from their country district, despite a relative lack of political talent. But then a cad who had fled their county decades ago returns, and runs a very dirty campaign -- it appears Hugo will lose, despite the clear lack of character of his opponent. However, Kathi has her own ideas -- already demonstrated! -- about how to deal with cads who threaten her husband!

The result of all this is quite cleverly (and, I suppose, cynically) worked out, and the eventual effect on Hugo's future career is very amusing indeed. This is perhaps the lightest -- if also the most violent! -- of these three stories, and it's quite amusing. And, again, set very much in opposition to the standard romance cliches.