Here's my review of Old Twentieth, written for SF site back in 2005 when it appeared. I've added a couple of things to update Joe's career status. 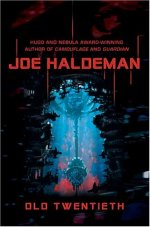 Joe Haldeman is a wonder. He continues to produce a novel every couple of years, each compact and intelligent and engaging and involving. [Alas, we have not seen a novel since Work Done for Hire in 2014. I suspect Haldeman may have retired -- and a well-earned retirement, no doubt.] At times he fumbles the ending (as with Guardian), but even in such a case the ride is very entertaining. [My main issue with Guardian is that I was loving it so much, when it switched from a historical novel to an SF novel -- and I didn't want that switch! Perhaps the reader's fault, and not the writer's.] And at other times, he finds a surprising yet internally logical ending that wholly satisfies -- so it was with The Coming, and now again with Old Twentieth. Haldeman also, as with some other veteran authors, has a certain facility with the toolbox of SF: with the classic ideas and again with the latest hot ideas; and he combines them effortlessly and effectively.

In Old Twentieth the ideas Haldeman juggles are immortality, Virtual Reality, Artificial Intelligence, and a variant on the generation starship. He is also, as the title tells us, concerned with the 20th Century, the bloodiest century (though the 21st will turn out to be bloodier, says this novel), and the last century in which death was inevitable.

Central to this novel are scenes of war. We open at Gallipoli, one of the worst battles of World War I. But somehow the narrator escapes certain death, and we quickly gather that he is really using Virtual Reality to experience a simulation of an historical situation. He is Jacob Brewer, whose family was rich enough to purchase an immortality treatment before an horrific war between the lucky immortals and the poorer people who couldn't afford the treatment. He and his mother were among a very few survivors, but a couple of centuries later, the world has recovered, and a stable population of a billion or so lives quite pleasant lives. And they have decide to mount an expedition to Beta Hydrii.

Jake is the VR expert on the fleet of starships. His job is to maintain the VR simulation, which is mainly used for immersive experiences in any number of times in the 20th Century. The story concerns the starships beginning their journey. Jake gets married (a ten year contract -- immortals don't marry for life). And as the journey begins, unsettling things start to happen in VR. The most unsettling thing is that people start dying -- immortals. Another concern is some minor inconsistencies in the VR backgrounds. Jake's insistence on returning again and again to the VR tanks, dangerous as they seem to be becoming, puts great strains on his marriage. And he begins to realize that the VR system itself may be showing signs of independent action...

That's the main arc of the "present day" story: a mystery concerning problems in VR, and potential AI activity. And the resolution to this arc is quite surprising, and quite effective. But the story gains depth -- dare I say gravitas -- from the background supplied by the recurring trips to 20th Century milieus: World War I, the influenza epidemic, the Roaring Twenties, the Depression, World War II, Vietnam, the first Gulf War, etc. These, combined with Jake's memories of his youthful experiences in the terrible war that nearly ended human civilization, provide a dark but oddly hopeful backdrop to the story of an expedition of immortal humans to another star -- a likely one way trip for no reason but knowledge, and a trip that almost before it starts is ominously freighted with the reappearance of the specter of death.

I hope I don't damn with faint praise when I say that this isn't a great novel: just another damn good novel, to add to a long list of damn good novels from Joe Haldeman. He may be the writer I can most reliably turn to for a worthwhile SF novel every time out. Old Twentieth is a great pleasure to read, and it rewards your reading not just with page turning interest but with thoughtful speculation. What more do we want from SF?