Gideon the Ninth, by Tamsyn Muir 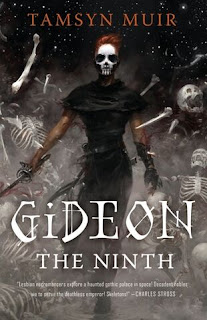 Gideon the Ninth is Tamsyn Muir's first novel. Muir is a New Zealand based writer, who has published some outstanding horror-inflected short fiction since 2012. (I've reprinted two of her stories in my Best of the Year anthologies, which says something, I suppose, as in general horror is not my favorite mode.) Gideon the Ninth got a great deal of attention, including Nebula and Hugo nominations, and a Locus Award for Best First Novel. I knew I wanted to read it as soon as it came out, but, well, I'm terminally behind on novel reading. I have finally read the book, or, I should say, listened to it, via the audiobook read by Moira Quirk. My paper copy of the book is in storage, as we are getting work done on my house, so for the first time I will try to review a book via the audio edition (and some online cribbing!) alone. (I mean, who knew that the word I heard as "Lictor" was spelled "Lyctor"? Not to mention I was not quite sure if the main character's name was Gideon Naff or Gideon Nav, though I eventually leaned towards the latter, which turned out to be correct.)

Short version -- so as not to bury the lede! -- I really really liked this book. It's funny but very dark; it's science fiction but also fantasy and horror; the characters are involving and the plot is excellent, with a truly inspiring and deserved climax. (It's been described often as "Lesbian necromancers in space", which is not exactly wrong but kind of misleading. Yes, there are necromancers -- in fact, lots of them. Yes, there are Lesbians, but straight people too, and the fact that the main characters are Lesbians is important in the way that any character's sexuality is important, but it's not quite central. As for space -- well, this is a spacefaring civilization, but the book is primarily set on a single planet, in a single building.)

We open on the Ninth House, which we soon gather is a planet, inhabited by, as far as we can tell, an extremely small population of mostly older people. The sun is called Dominicus, and there are nine houses, each based on a planet. The fact that there are nine planets suggests that possibly the system might be our Solar System, and the Ninth House Pluto -- though I'm not sure this is a necessary conclusion. (For example, the most populous "House" might be the Third House -- could that be Earth? But the First House seems the historical base of this civilization -- could that be Earth? We really don't have enough information yet. Perhaps those who have read the sequel (Harrow the Ninth) have a better idea.) The primary point of view character is Gideon, who was not born on the Ninth House, but who was more or less adopted by them when her mother's spaceship crashed there, and her mother died. She is plotting to escape the Ninth House and join the Cohorts, the Undying Emperor's army. But her hated enemy, Harrowhawk, the Reverend Daughter of the Ninth House, nominal ruler given that her parents have taken an oath of silence (convenient, that, as they are dead) is one step ahead of her. And then a summons comes from the Emperor. Each of the other eight houses (besides the First) are to send a necromancer, along with a "cavalier", to the First House, to train (or compete?) to become a Lyctor, and aid the Emperor in his ongoing war against some -- not well defined (though again I suspect Harrow the Ninth might help) -- enemy. Harrowhawk is of course the leading necromancer of the Ninth House, and there is a prospective cavalier, but, to Gideon's horror, Harrow has other ideas, and she maneuvers things so that the prospective cavalier is unavailable, leaving Gideon as the only alternative. Gideon is already a good fighter, and she gets some special training before they leave for the Lyctor competition.

This training happens on the First House, in a huge building (or palace) called Canaan House, that seems in terrible disrepair. There are 7 other "pairs" of candidates (though one "pair" consists of two twin necromancers to go with a single cavalier.) These are a carefully varied lot, with some positioned to be enemies of the Ninth House, and others allies. Each house has a different necromantic specialty -- for some reason the Ninth House is roundly feared, because of their traditional role as guardian of the "Locked Tomb" (which holds the body of the Emperor's greatest enemy) and because of their spooky bone magic. But the other necromancy is often just as scary -- the Eighth House specializes in using the life force of another person (typically the necromancer's cavalier), and the Seventh House requires their necromancers to be terminally ill, using the force of their dying to power their magic. The candidates are all given a room, and almost no instructions -- it becomes clear that their task is essentially to solve a puzzle contained within Canaan House. (Indeed, much of the novel really reads like an account of an attempt to solve an escape room -- to be sure, a much more deadly escape room than those I have played!)

To this point the novel has been dark in a spooky but not really scary way, rather claustrophobic, and quite funny, the last driven to some strong degree by Gideon's snarky voice. Muir's prose strategy (apparently on purpose) is to use utterly implausible contemporary slang (along the lines of "That's what she said" jokes) to balance the strange far future milieu -- and I have to say that I found that a bit annoying at times. The other "weakness", I thought, was a near complete lack of information about the real nature of this spacefaring civilization -- there is a real sense that this Solar System might have a population of just a few thousand, based on what we see. I'm inclined to let that pass -- I suspect we learn a lot more in the second (and upcoming third) novels; and this novel's focus is what it needs to tell its story. (That said, just a bit more sketched in background detail might have been nice.)

Then the "trials" begin. Harrow abandons Gideon, attempting to solve the puzzles (of which Gideon remains at first unaware) by herself. Gideon trains with the other cavaliers, learning that she's actually pretty good despite her relative lack of cavalier training. She also makes some friends, particularly with Dulcinea Septimus, the languidly pretty and dying necromancer of the Seventh House. She also develops a bit of a crush on the stunningly beautiful Coronabeth Tridentarius, one of the curiously mismatched twin necromancers of the Third House. But then some terrible things happen, beginning with Harrow disappearing. With the help of the scientifically inclined necromancer of the Sixth House, Palamedes Sextus, Gideon rescues Harrow from what seems a death trap; and from then on she insists on helping Harrow with the puzzles, which turns out to be crucial. Soon a necromancer/cavalier couple are found horribly murdered, and the whole trial turns real.

So the book continues, with further sets of scary puzzles, and intriguing knowledge gained from each solution. But there are more deaths to come; and a fraught question: is it allowed for the candidates to cooperate? Or must they battle each other to steal the keys and knowledge obtained? And who or what is doing the killing? There are terrible secrets to learn, such as the means by which one becomes a Lyctor. (There are other more personal secrets, involving Gideon's and Harrow's childhood, and what happened to Harrow's parents and for that matter Gideon's mother. Also of course there is the predictable from page 5 or so development of Harrow and Gideon's personal relationship.) And everything winds up to a tremendous whizbang of a conclusion.

And I have to say -- the climax of the novel is just wonderful. It is a triumph in part of plotting -- we can kind of guess who the villains are early on, but who they really are -- and why! -- is a delightful revelation. There is tremendous action, and some really powerful moments, turning on honest and believable sacrifices. There were a couple of times I was cheering -- and times I was close to tears. This is definitely a book that "sticks the landing". And while it's the first of a trilogy, it tells its story completely, and does not leave us hanging on anything crucial (though to be sure there are still questions we look forward to learning answers to in the subsequent books.)