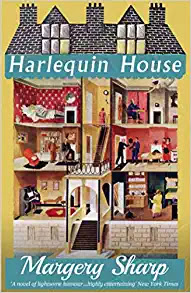 I recently read Margery Sharp's first novel, Rhododendron Pie, in its 2021 reprint from the Furrowed Middlebrow imprint of Dean Street Press. And I reviewed it here, so I will dispatch with  my quick summaries of my past experience with Sharp as both a children's author (The Rescuers) and an adult author (Cluny Brown et. al.), and also with the potted mini bio. All I will say is, having read Rhododendron Pie, I quickly proceeded to another of the Furrowed Middlebrow Sharp reprints, her 1939 novel Harlequin House.

Her first novel was quite nice, but by this one, her 8th, she had fully hit her stride. Indeed, I've read the novel preceding it (The Nutmeg Tree) and the two following it (The Stone of Chastity and Cluny Brown), and clearly by this period she had fully found her voice and her subject matter -- the latter being eccentrics, people just a step outside conventional British mores, just enough to titillate, but fundamentally attractive to any sympathetic reader. 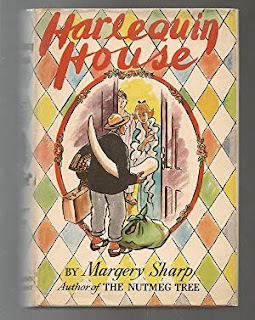 Harlequin House concerns, at the "romantic" heart of the story, a pair of siblings, Lisbeth and Ronny Campion. But Sharp chooses to tell the story primarily via another, unrelated, character, an older man named Mr. Partridge. Mr. Partridge runs a lending libary in the seaside town of Dortmouth. He appears an entirely respectably widower, but he has a streak of "lawlessness", represented among other things by his habit of interpreting the word "soon" in the "back soon" sign he posts on the door of his library whenever he takes a break rather liberally. While wondering his town, and particularly the resort hotel, he takes pleasure in watching people, such as beautiful Lisbeth Campion, whom he notes "resisting the attentions" of a great many hopeless young men.

We soon learn that Lisbeth and Ronny were raised by a couple of maiden aunts, and their married sister. Lisbeth is engaged, to a man who is now in India, in the Army. But she still seems to take an interest in other men, such as the somewhat older Charles Lambert. Her aunts, the Miss Pickerings, are quite respectable, and her other aunt, Mrs. Maule of Australia, even more so. But her brother Ronny is prone to getting in trouble. And when Mr. Partridge sees Lisbeth getting in a car with Mr. Lambert, he decides to jump, fancying himself, perhaps, an impromptu chaperon. The car, however, is going to London, and Mr. Lambert shows no special interest in Miss Campion's virtue. Instead he drops her off ... and Mr. Partridge reveals himself. And quickly learns Lisbeth's story -- she's been visiting her brother, who has been doing time for dealing cocaine (by accident, he swears.)

The upshot is that Mr. Partridge finally loses his job, and Lisbeth and Ronny, after a temporary stay with her strictest Aunt, Mrs. Maule, who is visiting from Australia, end up in a menage with him, called "Harlequin House" after Lisbeth lets her decorating insterests go. The idea is that Lisbeth is supposed to reform Ronny by getting him a good job; and the reality is that while Lisbeth is a good worker when she needs to me, and while Mr. Partridge (who finds an amusing job of his own) is glad to pitch in, the feckless Ronny never does a lick of work. The clock is ticking until Lisbeth's fiance returns from India to get married ...

The reader knows what's going to happen. There is no way that Hugh Brocard and Lisbeth are a reasonable match ... and the only hope for Ronny is a woman that will keep him in line ... and Mr. Partridge? Well, he's a survivor, that's for sure. The book proceeds forward to the inevitable conclusion, and that's not what matters. What matters is the sheer comic fun (light comic, not slapstick nor, really, satire) of it all. Lisbeth's rackety but goodhearted ways. Ronny's rackety but frankly wholly irresponsible and not in a good way ways. And Mr. Partridge, never quite understanding the Campions, indeed often wholly on the wrong foot, but always willing to go along with things; while effortlessly making friends with the other people in their house, such as the Walkers, genius level bakers; or T. Cubitt the grocer; and with the folks at the pub he quickly gravitates to. Mr. Partridge, of course, valiantly tries to prevent Lisbeth from doing wrong with the American man who seems much taken with her -- but even in that case he proves no match for Lisbeth's aunt Miss Pickering, who between visits to the Anti-Vivisection society is able to understand who is best for Lisbeth's future.

So what of the book. It is really lovely stuff -- one of those books that not only makes you laugh, but makes you smile throughout. It's the lightest of confections, sure -- and not all of Sharp's books are quite so light (though they are never "heavy", nor "dark",) but the lightness is in service of the reader's delight. I continue to be convinced that Margery Sharp is a writer wholly worthy of wide rediscovery.