The High Hand, by Jacques Futrelle 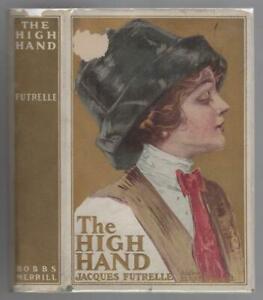 Here's a return to the kind of book I started this blog to cover -- popular fiction, often forgotten, from the first half of the 20th Century. Often the books I cover in that category were bestsellers, but I'm not sure The High Hand sold particularly well. It was first published in 1911 by Bobbs-Merrill, but my edition is the 1912 reprint from Grosset & Dunlap. (Grosset & Dunlap were primarily reprint publishers, and indeed they filled a function analagous to that of mass market paperbacks beginning in 1940 or so.) The book is signed on the inside front cover and facing page by Mrs. Alfie Brown, and "? J. Brown", the latter signature dated 7/14/1912. It is quite a short novel, in the range of perhaps 50,000 words. This book is illustrated by Will Grefe. Grefe's illustrations are quite nice, in very much the typical style of late 19th and early 20th Century illustration as reprsented by the likes of Harrison Fisher and Charles Dana Gibson.

I have remarked in these entries that often the biography of these writers is more interesting than their novels. Jacques Futrelle is another example. He was born in Georgia, on April 9, 1875. He became a journalist, starting the sports section at the Atlanta Journal, and continued to the New York Herald, the Boston Post, and finally the Boston American. In the latter paper he published a detective story, "The Problem of Cell 13", in 1905, featuring a "scientific detective", called, "the Thinking Machine", Augustus S. F. X. Van Dusen. He wrote a number of further stories of the Thinking Machine, and it is these stories for which he is now best remembered, to the extent he's remembered at all. He left the American in 1906 to concentrate on fiction, and seven novels followed. He died on April 15, 1912, aged only 37. That date will be significant to some -- it is the date of the sinking of the Titanic, and in fact Futrelle, who had a first class ticket, was on his way back to the US on that ship. He refuse to get in a lifeboat, and (so the story goes) basically shoved his wife into the boat, and her last sight of him had him standing with John Jacob Astor, smoking a cigar as the Titanic went down. 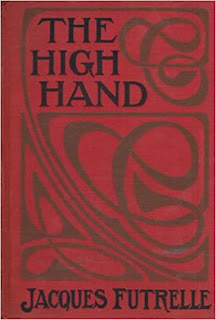 Well, then, what about the book at hand? It's really a fairly minor effort. It's not one of his detective stories. Instead it's a political story, reminiscent of a couple other books I've reviewed here, such as Half a Rogue, by Harold MacGrath. Jim Warren is a young man in Warburton, in an unnamed Northeastern state. He has come from humble beginnings to become superindent of a factory, with the prospects of become manager when his boss retires. He's happy there, but when one of his workers suggests he ought to go into politics, to represent the interests of the working man, and to provide an honest alternative to the crooks who have controlled local politics for some time, he gets intrigued. And before long he has what he calls "the big idea", which is not made clear until the end, though we gather that his study has revealed that the crooks are "playing with marked cards", so Jim Warren will mark his own cards, to sweep them out.

The local state representative is one Francis Everard Lewis, who has become suddenly rich after gaining his seat. Lewis controls a legitimately rich fellow representative, Dwight Tillinghast. Tillinghast is a weak man, and Lewis has maneuvered him into the speakership of the legislature, with prospects of becoming Governor in the next election. Lewis has extracted a price, of course -- Tillinghast's beautiful daughter, Edna, being part of it.

Warren and Lewis' longtime fixer, one Franques, strike a deal -- Franques giving Warren the goods on Lewis. Using this information, Warren is able to force Lewis to drop out of the race for re-election, leaving the field clearl for Warren, who runs as the "honest man" who will clean up the corruption in their state. In the mean time, Warren has chance met Edna Tillinghast, and he is intrigued, but she learns who he is, and will have nothing to do with him when she realizes he has acted against her fiance. Warren carries forth in his campaign, winning easily.

And when he takes office, he continues maneuvering, making deals -- dirty deals -- to get plum assignments. These assignments give him the chance to advance the interests of his constituents -- but at a considerable price: he is acting as corruptly as those he had campaigned against. And soon he realizes that the price is even higher, for he is in love with Edna Tillinghast, and she has nothing but contempt for him. Worse, once he realizes that she has finally learned the depth of her fiance's own corruption, she breaks off the engagement. Moreover, Warren's plans require him to force her father out of the race for Governor. And his honesty compels him to confess to Edna his own involvement in underhanded schemes ...

But -- but -- Jim Warren still has his "big idea". With that, even facing arrest when Lewis exposes his corrupt deals, perhaps he can salvage everything! Everything, perhaps, but the love of Edna Tillinghast!

Well, what can I say? It's rather a silly book in many ways. Jim Warren's scheme is convoluted and reasonably speaking would never have worked. The message is sound enough -- yes, politicians, then and now, were as corrupt as the book displays, but still ... The resolution has some outrageously melodramatic elements (especially when we learn Franques' motivation.) And the depiction of women (basically Edna) is as full of guff as one could possibly imagine. That said, it's a quick read, never boring, and I don't regret the time I took with it.