As I noted in my recent review, I was quite late to the party in getting to the first book in the Broken Earth Trilogy, The Fifth Season, which won the 2016 Hugo for Best Novel. I was very impressed by that book, most particularly by the prodigious imagination displayed, by the world-building. I certainly agree that it deserved its Hugo. But my lateness in getting to the first book meant I was even later in getting to The Stone Sky, the concluding volume of the trilogy. (The second volume, The Obelisk Gate, probably the weakest of the three (which is not to say it's a bad book at all) also won the Hugo, last year.) 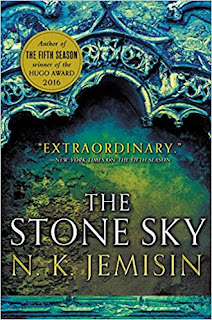 The Stone Sky is still a very impressive book. But I have to say that for a couple of reasons I didn’t enjoy it as much as The Fifth Season. Part of this is common to series – the bulk of the cool ideas are introduced in the first book, so the later books are less fresh. That said, there are new revelations in each book of the series, a continually deepening understanding of how the Earth (the living and angry Earth, we now understand) got to its current state, and likewise how human society got to its state (and we learn much more about that state as of thousands of years previously). So really that’s OK. However, oddly, as things go on the books – which from the start read as poised on that fractious border between SF and Fantasy – gain more and more of a Science Fictional rationale. We can read them as true SF – what we don’t understand, what we (and the characters) call magic seems to have some variety of rational explanation, even though we mere humans (including the books’ characters) don’t understand that. That’s OK, in fact it’s kind of cool, but it also caused my suspension of disbelief to fracture dangerously at times, particularly when faced with people being literally carried through the center of the Earth, through stone (and magma). And in a matter of hours. The other issue I had in enjoying the book – though I think this aspect was unavoidable (and correct) – the main characters are really rather unpleasant. As who wouldn’t be, having gone through what they did! But it did make it harder, in a way, to spend the whole book with them. And the resolution, while fairly sensible and honest, fell maybe just a bit flat to me.

The book is told in three threads. One follows Essun, the main character of the whole trilogy, as she accompanies her new comm, Castrima, in searching for a new place to live, all the while planning to leave and find her daughter Nassun. The second thread follows Nassun, who has been living in a new kind of Fulcrum (orogene training facility) called Found Moon. Her part opens with her killing her father in self-defense (her father, in the first book, killed her brother and ran away with Nassun). She and two allies of sorts – the Stone Eater Steel and her beloved personal Guardian Schaffa (who has escaped the control that makes Guardians abuse orogenes) also kill two other Guardians and leave Found Moon, to head to Corepoint, on the other side of the world, and wait for the Moon’s return, access the Obelisk Gate and destroy the world. The third thread – in many ways the most interesting – concerns a “tuner” called Houwha, in Syl Anagist, which we gather eventually is the civilization, thousands of years in the past, which created the obelisks but which was destroyed, leading to the creation of the supercontinent called the Stillness, and to the Fifth Seasons, and eventually the Yumenes empire. Houwha and her fellow “tuners” are, in the course of the narration, shown the reason for their creation, the fact of their oppression, and the multiple wrongs at the core of this sometimes utopian seeming civilization. These wrongs parallel, to some degree, the treatment of orogenes in the “present” as of The Fifth Season. Houwha’s mission is to activate “geoarcanity”, which will harvest the Earth’s power to permanently maintain Syl Anagist – but at great cost, to tuners, their quasi-ancestral race, the Niess, and to the living Earth itself.

The narrative strategy is striking, and ultimately wholly successful: the novel is narrated in second person, from Houwha (or what Houwha has become) to Essun, so that Essun’s sections are pure second person, Nassun’s third person in the form of a tale told to Essun, and Houwha’s pure first person. At first this seems a bit of a stunt, but once the reader realizes what’s going on, it comes together to make perfect sense.

In the end it’s a strong book that, as I said, I respect a great deal, but don’t quite love. It’s an effective conclusion to a very strong trilogy. I think it will end up second or third on my ballot, behind Raven Stratagem and possibly New York 2140 (I won’t know until I finish reading that!). I still think, strongly, that Ka and Spoonbenders and The Moon and the Other deserved nominations (and would still rank 1,2,3 on my ballot had they gotten them), but The Stone Sky is a worthy nominee, if not quite the book I hope wins. (I will admit that to an extent this is because of a feeling that two Hugos are enough for this series – which may not be entirely fair, but there you are.)

In the end, of course, The Stone Sky won the Hugo, and indeed it's very fine book, and the Broken Earth trilogy is a remarkable accomplishment.