Today is Melisa Michaels' birthday. Melisa wrote a number of enjoyable SF novels, the Skyrider series, of the Space Opera sort, in the mid-80s, followed by a few more, some of them fantasy, the last of which (to date) appeared in 2004. She was the first webmaster of SFWA's site, and was given the Service to SFWA award in 2008. I wrote this review back in 1997, when Cold Iron, the first of two books about Rosie Levine, appeared. 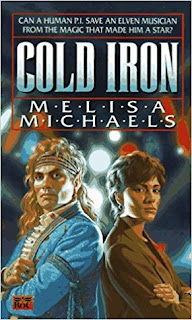 Christmas season is upon us, and Rosie Levine, San Francisco-based PI, is irritated. She hates Christmas. So when her partner barges into their office with a huge Christmas tree, Rosie, against her better judgment, decides to escape by taking on a rather vague and unpromising case.

Candy Cayne (why didn't that name bother her?), a groupie of sorts for the elfrock band Cold Iron, thinks someone is trying to kill the band's leader, and she wants Rosie to find out who and why.
Rosie joins the band and follows them on a few tour stops, to LA and Hawaii. Despite her initial revulsion, she finds herself drawn into the self-destructive lifestyle of the elfrock stars: heavy drug use, absurdly casual sex, and childish violence. And she finds herself both attracted and repelled by the charismatic elf who leads Cold Iron, Jorandel. Rosie does precious little detecting, but in their different ways both Candy and Jorandel lead Rosie to some painful personal revelations and self-discovery. Then, events overtake Rosie, a couple of deaths occur, and she finally starts investigating the violence surrounding the band. There some nice twists, and a complicated scheme comes clear in a moving ending.

Cold Iron works as three different (well-integrated) books. It is a moving and careful examination of an outwardly tough woman's character, and the scars which are holding her back from, I suppose one would say, complete maturity. It is also a mystery story, of the "female hard-boiled detective" variety, a la Sue Grafton and Sara Paretsky. And it is a look at the scary but glamorous personalities of the members of the elfrock band, especially the very attractive, very unhealthy, leader, Jorandel.
The first level, Rosie's story, is very successful, I think. Rosie is an appealing character. We care what happens to her, even as one is tempted to scream "Wake up!" at her every so often. And, as I say, her personal story is resolved (or, rather, moved towards resolution: I suppose no one's life is ever really "resolved") in a strong, believable fashion.

The second level, the mystery story, is decent but not wholly involving. The scheme at the heart of it struck me as a bit far-fetched, and possibly a bit under-motivated as well. In addition, Rosie's relative slowness in catching on to things, while thoroughly believable and in character (and important to the story), does tend to distract from the mystery: the reader is for most of the book a bit too far ahead of her.

Finally, the third level, the metaphorical level at which elves are compared to rock stars and vice versa: this is what makes this novel a fantasy, rather than a crime novel. And one easy question is: why make it a fantasy at all? The story would work quite well as an ordinary mystery. (A couple of minor plot points do turn on the nature of elves, but I think substitutions could easily have been arranged.) Indeed, from an SF/F reader's point of view, the book raises questions that don't get answered: Why is this world, outwardly quite similar to ours, also openly inhabited by elves (who interbreed with humans)? What is the structure of elven society? Is there an historical explanation for the nature of this world? Just exactly where is Faery? And so on. But answering these questions isn't part of the goal of this book (maybe in a sequel?) Rather, it seems to me, the elfrock band presents a spectrum of elves and halflings ranging from relatively sane, to purely childish, to the dangerous, fascinating Jorandel. Of elves it is said they are "fallen angels, not good enough to save, not bad enough to be lost...who have every charm but conscience", and Jorandel is an excellent illustration of this description. (And the other band members are well portrayed also, ranging in character from an affectless sociopath to a unexpectedly delightful shy sweetheart.) In this way, oddly, it seems to me the core metaphor of this book is "elves are like rock stars" rather than the more conventional "rock stars are like elves". And the directionality of that metaphor makes the book a fantasy. (Or, quite possibly, this reader, an SF reader, is intepreting the metaphor quite differently than a non-SF reader would: and I suspect a mystery reader would enjoy the novel as a mystery, and regard the elf business as local color, or a gimmick. I don't know if mystery readers who don't read SF are likely to find this book, though.)

In summary, this is a fine novel, with a contrasted pair of deeply hurt central characters, who solve their problems in ways which are true to their characters, and which nicely illustrate the nature of humans, and of elves.
Posted by Rich Horton at 5:52 PM