Fred Chappell was born May 28, 1936, in Canton, North Carolina. He attended Duke University, and spent 40 years as a Professor at UNC Greensboro. So we get it -- he was a North Carolinian! He has received considerable and well-deserved notice for his mainstream fiction set in the South -- he can be called a Southern Gothic writer. But he has also written a good deal of Fantasy and fantastical poetry, often published in genre sources such as Weird Tales and F&SF. In honor of his 82nd birthday I'm reposting this brief review, first posted at SFF.net in 2004.

More Shapes Than One is a 1991 collection of short fiction. Chappell, as noted, had considerable apparent interest in the SF genre, particular the horror side of things (with Lovecraft, I would surmise, a special interest). This interest is amply displayed in this collection. For one thing, three of the stories appeared in genre outlets, two in Best of the Year collections (the DAW Best Horror in one case, and Datlow and Windling's Best Fantasy and Horror in the other) and one more in Weird Tales. All but a couple of the stories are at least to some extent fantastical, and a couple stories directly concern horror/fantasy writers. I liked the book a great deal. 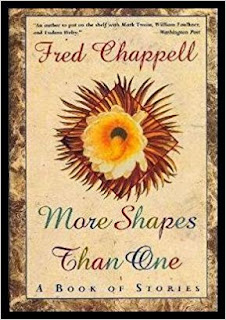 The first couple of stories reminded me of Byatt's The Biographer's Tale, which I recently read [as of the first publication of this review in 2004], in their subject matter: "Linnaeus Forgets" is of course about Linnaeus, and "Ladies of Lapland" about an exhibition to Lapland. Both are fun stories with a certain density of obscure historical facts (as I assume): the first about Linnaeus receiving a very strange plant from a sailor; the second about a French geographer travelling to Lapland and seducing a number of Lapp women.

"The Snow That is Nothing in the Triangle" is a curious story about the mathematician Feuerbach -- it didn't no much for me. "Barcarole" is about the composer Offenbach encountering a dying musician with a resemblance to himself, and about a long-loved tune of Offenbach's youth. A nice story. "Weird Tales" is about H. P. Lovecraft, Hart Crane, and a strange associate of both, Samuel Loveman, who discovers a means of visiting Antarctica in other times -- as when the Elder Gods ruled ...

One of my favorite stories is new to the book, "The Somewhere Doors". This concerns a barely successful pulp writer in the late 30s and 40s, who encounters a strange woman with a very unusual message for him. This eventually gets him in trouble when the government decides the woman is a Communist -- but she may have given him an out in the form of the title doors. My other favorite story is "Duet", pretty much pure mainstream (possibly the only non-fantastical story in the book), about an old-time musician reacting to the death of his friend and fellow musician.

"The Adder" is a clever story about a copy of the Necromonicon in the original Arabic, and its baleful effects on neighboring books. "Ember" is straightforward horror about a man who murders his girlfriend and tries to escape, with predictable (to the reader) results. "Miss Prue" is a very short story about an elderly woman and her relationship with her long time suitor. "Mankind Journeys Through Forests of Symbols" is a very fun story in which unwritten Symbolist poems can take tangible form, and one blocks traffic in rural North Carolina. "Alma" is pretty solid SF about gender roles -- set in a world where men and women are treated as basically separate species, with women quite literally enslaved and sold by some of the men. And "After Revelation" is apparently set in the future, after a couple of holocausts, in a world where science is proscribed -- then the "Owners" come, offering complete knowledge and happiness.

This is a very fine collection of stories, I think.