A Not Forgotten Recent Novel: A Virtuous Woman, by Kaye Gibbons

A Not Forgotten Recent Novel: A Virtuous Woman, by Kaye Gibbons

This novel doesn't really fit my blog's various viewpoints at all: it's not Old; it wasn't a Bestseller (though it sold pretty well, I imagine, after it became an Oprah Book Club Selection); it's not Forgotten (helped, again, by Oprah); and it's not Science Fiction. But I was looking for a bit of a change of pace as I was working my way through all the 2018 Hugo Nominees, etc., and when I came across this book at an estate sale I thought it looked intriguing. And indeed, I enjoyed the novel a great deal.

Kaye Gibbons was born May 5, 1960, so she's seven months to the day younger than me. (And, this post is a few days late to be a Birthday Review.) She was born and educated in North Carolina, and still lives there. She's probably best known for her first two novels, Ellen Foster and A Virtuous Woman. 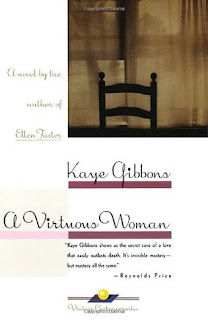 A Virtuous Woman is a very short novel (perhaps just a bit over 30,000 words). It's told in two voices: that of Blinking Jack Stokes, who is mourning the death of his wife Ruby, aged only 45, and trying to figure out what he'll do with himself; and that of Ruby, in the last few months of her life, after she is diagnosed with lung cancer. Their voices are those of rural North Carolinians, colloquial, often funny, just avoiding bitterness.

Jack is twenty years older than Ruby, a poor tenant farmer, skinny and homely, but honest and sweet and not too bad a drinker. Ruby is the child of a somewhat wealthy farmer, and beautiful. But when she was 18 she ran away with a violent and abusive migrant worker, who beat her, and taught her to smoke, and was unfaithful and a terrible drinker. While working at the Hoover farm, where Jack lives and works for the Hoovers, Ruby's husband gets into trouble and is knifed in a bar fight, and dies. Jack has fallen hard for Ruby, whom he sees as way out of his league, but he asks her to marry him -- and Ruby, too ashamed to go home, and just wanting someone to care for her and treat her right, agrees.

Their narrations reveal both the bare few events of the months before and after Ruby's death, but also their back story. Ruby's upbringing and first marriage, of course, but also an outline of their life after their marriage. It is informed by their inability to have children (either Jack is unable to, or Ruby (perhaps due to some violence of her first husband's doing), or both); and by their love for Jack's friend Burr's daughter June, who was the younger child of Burr's horrible wife Tiny Fran, the daughter of Jack's boss Mr. Hoover, who married her off to the most convenient local man when she got pregnant. Their life is externally not terribly comfortable -- Jack never gets the land he wishes for, so they never have much money; Tiny Fran and her first son Roland are dreadful people, and so are others of their milieu; they are unbelievers in a Christian community -- but it's clear they love each other desperately (but quietly), and they find a way to be happy.

The novel is often funny (if gaspingly so), often very moving, and pretty harshly honest about rural poverty. I liked it a great deal. Perhaps every so often we see the author's hand on the scale a bit in favor of her protagonists. Perhaps some of the bad people -- Tiny Fran in particular -- are treated somewhat cruelly. On the other hand -- such people exist, both good, like Jack and Ruby, and bad, like Tiny Fran and Roland. In the end: I was both amused and very very moved. (The chapter in the middle, about their love for June, and their realization they won't have children, and their feelings for their dogs, is just devastating.) I recommend it.
Posted by Rich Horton at 8:20 PM