This very brief review was first written for a column I did for Fantasy Magazine long ago. I'm reposting it in honor of Sherwood Smith's birthday.

Sherwood Smith has written a wide variety of books but for my taste her best is Crown Duel, a YA book originally published as two novels. That was set in a fantasy world she has been working on since childhood, and in which she has set many other stories. Her new novel, the beginning of a series, is Inda, which it turns out is something of a distant prequel to Crown Duel (though no knowledge of the other book is required). 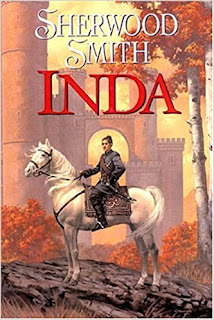 Inda is not marketed as YA, and it does feature some not very explicit sex, but its main characters are all teens or younger, and if you ask me it’s appropriate for teen readers -- and also very enjoyable for adults. The title boy is one of several viewpoint characters. He is an aristocrat, the sister of the King’s heir’s intended wife (marriages in this world seem generally arranged from young childhood, and the girl grows up in her intended’s household).  He is brought to the capitol for war training at 10, where he befriends the King’s second son, called Sponge. Sponge, an intellectual boy, is despised by his mentally handicapped elder brother, the heir, and by his scheming Uncle, the Sirandael or "Shield Arm" of the King. But Inda, preternaturally talented at command, befriends Sponge and begins to build a cadre of boys loyal to him, which threatens the plans of the Sirandael. So Inda is framed for a crime and exiled to the sea, while Sponge must make his way alone. Meanwhile the Sirandael embroils his country in an ill-advised occupation of a neighbor, and continues to scheme against Sponge and against other people such as Inda’s also-talented older brother, whose position is further complicated because of the lust the King’s heir feels for his beautiful intended wife.

The novel perhaps starts a bit slowly, but it is in the end supremely readable, full of strong action: wargames, land war, and pirate actions at sea; as well as courtly intrigue, a mild amount of interesting magic, and some well-presented sexual tension. I enjoyed it immensely, and I eagerly await the sequel, due in 2007.