Old Bestseller: Under the Red Robe, by Stanley J. Weyman

One of those Old Bestseller writers I fully expected to get to in the course of this series of reviews was Stanley J. Weyman, because his was a name I knew. I had heard of him, as a very successful British writer of popular historical fiction. That's perhaps my favorite category of "Old Bestseller" -- throw in enough derring-do and enough nods at actual true historical details, and I'm usually pretty happy. So I'm glad I finally ran across a Weyman novel at a good price. And I'm glad that it pretty much met my expectations

Stanley John Weyman was born in 1855. His father was a solicitor, and Stanley was expected to follow in the family footsteps, so indeed he read for the Bar after taking a Second in History at Oxford. In 1881 he joined the family firm (Weyman, Weyman, and Weyman!). And his performance was at best lackluster. His lack of success left him sufficient spare time to try writing, and he began publishing short fiction, followed by a serial, The House of the Wolf, in 1888-1889. He became a full-time writer in 1891. Early in his career, his prime interest was France in the 16th and 17th Centuries, and he wrote 15 novels between 1890 and 1904 set in that place and period. Later novels were often set in contemporary England. He died in 1928. (For most of this information I am indebted to a website devoted to Weyman, maintained by Donna Dightman Rubin.) 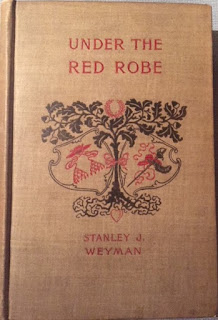 Under the Red Robe was first published in 1894. My copy is from the sixth printing of the American edition, from Longmans, Green. It is illustrated copiously by R. Caton Woodville, a British artist (and close contemporary of Weyman's) best known for his paintings of battle scenes.

The story opens with Gil de Berault gambling at a tavern in Paris. A young Englishman accuses him of marking the cards -- I'm sure Berault was guilty, but he challenges the young man to a duel and severely wounds him. But Cardinal Richelieu is trying to stamp out dueling, so it is a capitol crime, and Berault is arrested. Richelieu, however, owes him a favor, and instead of having him hanged, he offers an out: if he will undertake a dangerous mission and arrest the Hugueonot rebel Cocheforêt in the South of France, Berault's crimes will be pardoned.

Thus Gil heads to Cocheforêt. He quickly finds (as he expects) that the locals are very protective of their lord, even though Gil has pretended to be a partisan of the rebel cause. So he decides to go directly to Cocheforêt's chateau. There he does not find his quarry, but he is taken in by a woman he had seen in the town, who he is sure is Madame de Cocheforêt, and another woman who must be Cocheforêt's sister. Berault spends some days there, and he finds himself, to his distress, falling for Madame. He knows this is impossible -- not simply because she is married, though indeed that is a serious problem, but because he knows himself to be unworthy of any good woman.

So the story continues. Berault's quest is complicated by the arrival of a Commandant and a group of soldiers, who wish to make a more forceful attack on Cocheforêt. Berault also discovers a lost set of diamonds meant to help finance the rebels. And he discovers that he has mistaken the two women -- the woman he has fallen for is in fact Mademoiselle Cocheforêt, his quarry's sister.

What will he do? How can he retain his honor -- either he betrays his oath to Richelieu, or he betrays the cause of the woman he now loves. Indeed, any step he takes must increase Mademoiselle de Cocheforêt's contempt for him ... And too he must deal with the interfering group of soldiers.

The resolution depends in part on a key historical event: the Day of the Dupes, in which the Queen, who hates Richelieu, gains enough influence to threaten Richelieu's position. This, I gather, was one of Weyman's specialties, to have his books turn on significant but perhaps not overwhelmingly famous situations. Nothing here really surprises, but it's an enjoyable book, a fun read, nicely plotted, with a worthwhile solid finish.
Posted by Rich Horton at 7:14 PM