A Lesser-known Novel by a Great Writer: The Ordeal of Gilbert Pinfold, by Evelyn Waugh

A Lesser-known Novel by a Great Writer: The Ordeal of Gilbert Pinfold, by Evelyn Waugh

As I have mentioned before, I sometimes dip a toe into the work of a major writer, trying something shorter than their most significant works. And here I am again, with Evelyn Waugh. The Ordeal of Gilbert Pinfold is quite short, something shy of 50,000 words. I have read one other Waugh "novel", and it is even shorter: The Loved One.

Evelyn Waugh (1903-1966) came from a literary family -- his father Arthur was a critic and biographer, his brother Alec was a writer, and his son Auberon wrote five novels himself, though he was best known for his journalism. Evelyn was one of a cluster of major English novelists born around the same time -- Anthony Powell and Henry Green are two others. Evelyn Waugh was educated at Lancing College and at Oxford, though he failed to take a degree. After a couple of false starts at other careers, Waugh published a book on Dante Gabriel Rossetti and then his first novel, Decline and Fall. This novel and the rest of his early work (Vile Bodies, Black Mischief, A Handful of Dust, Scoop) was fiercely satirical; but beginning with his 1945 novel Brideshead Revisited, and especially in his later Sword of Honour trilogy his novels turned more traditional, less comic.

Anong his work, then, The Ordeal of Gilbert Pinfold is a bit of an outlier, a lightish short novel, somewhat comic but not satirical, published in 1957 in the midst of his writing of the Sword of Honour books. My edition seems perhaps the first, from Chapman and Hall. 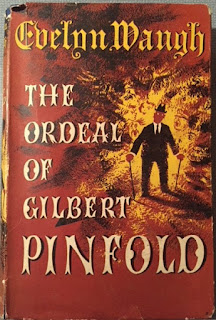 The book, subtitle "A Conversation Piece", is explicitly based on a scary event in Waugh's life, in which he experienced a series of hallucinations. Gilbert Pinfold is a reasonably successful novelist, about 50, happily married and living in a secluded provincial village. The Pinfolds are Catholic, Gilbert having converted, much as Waugh did. Pinfold has trouble sleeping and takes a disconcerting variety of drugs to combat this condition. At loose ends on his latest novel, he decides to take a trip to Ceylon. (Many of these details are entirely consistent with Waugh's own life.)

The rest of the novel concerns the trip. First there are some mild misadventures on his way to boarding. Once on board things get very strange. Pinfold is convinced there is a church group holding services on board; or a band; or that he can hear some sort of radio communications from the officers of the ship. Some of this convinces him that a sailor has been murdered and thrown into the sea, Then he decides that the Captain and some of the others have determined that Pinfold himself is a spy. The radio or intercom is full of diatribes or jokes about him. A woman seems to come on to him ... and so on.

This is very odd, and sometimes quite funny. The prose is clear and elegant. Some of what happens is really quite scary, mainly because Pinfold's mental state is obviously thoroughly messed up. But, really, though I'm glad enough to have read the book, it seems in the end rather a trivial thing. Not to say there's anything wrong with that. But I do come away feeling that sooner or later I've got to read Decline and Fall or Vile Bodies or something to really engage with Evelyn Waugh.
Posted by Rich Horton at 8:03 PM