Sylvia Townsend Warner (1893-1978) was a British novelist and poet who often wrote fantastical stories -- most significantly perhaps in her very late collection Kingdoms of Elfin (1977). I think I saw a story or two of her in anthologies edited by Terri Windling. She was a notable Lesbian writer (or perhaps bisexual, as she did have at least one significant relationship with a man), living with the poet Valentine Ackland from 1930 until Ackland's death in 1969; and her novels often feature characters of ambiguous sexuality. That is surely the case with the novel at hand, Mr. Fortune's Maggot.

Warner's father, George Townsend Warner, was a housemaster at Harrow School, and indeed the school's prize in History is named after him. Warner was an expert on Church music, one of the editors of Tudor Church Music. She spent some time in the Communist Party, then became disillusioned (as, one would like to think, who couldn't?), but remained politically involved from the Left.

I don't know that Warner ever had a major bestseller, but at least her first, and still best-known, novel, Lolly Willowes (1926), sold very well. Mr. Fortune's Maggot was her second novel, published in 1927. My copy is the second printing of the first edition. Much of her work had as a theme a rejection of Christianity, though, based on Mr. Fortune's Maggot, the Christianity being rejected is a conventional and unthinking version. The book is quite short, something shy of 50,000 words. 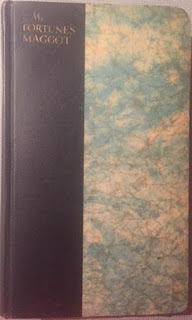 Mr. Fortune is a curious case -- he spent most of his adult life as a clerk for a bank. Finally finding a vocation -- and a fortuitous inheritance -- he attended seminary (or "training college") and upon ordination went to an archipelago in the Pacific as a missionary. Alas, his skills were quickly noticed, and he spent years managing the mission's finances. Finally he insisted upon a more active missionary role, and went to the isolated island of Fanua.

On Fanua he makes a single convert, an adolescent boy named Lueli. He finds the rest of the island's inhabitants not terribly interested in his preaching. They find their life easy, and their habit of each having a personal god, or idol, has worked just fine for them. Mr. Fortune and Lueli live together, in a hut somewhat isolated from the primary village.

This relationship has rather obvious homoerotic aspects, though Mr. Fortune seems mostly unaware of them. He is rather obviously a gay man who is closeted even to himself. It's made clear that his past relationships with women were tepid and obligatory, and his love for Lueli, and Lueli's for him, is made obvious, though it is never consummated. Mr. Fortune continues to attempt to convert Lueli to a full commmitment to Christianity, but with little success. And after a crisis -- an earthquake and volcanic eruption -- Mr. Fortune realizes the error of his ways, and loses his faith. More importantly, to him, Lueli has lost not his faith, such as it was, but his will to live. Most of the rest of the novel concerns Mr. Fortune's efforts to restore Lueli's will.

The novel proceeds then to a fairly obvious resolution. The ending is rather bittersweet, though unavoidable. I have to say, on balance, that I really wasn't all that impressed. The Christianity that Mr. Fortune rejects is a rather weak version of Christianity. And Mr. Fortune, though very believable as a character, is in the end not terribly interesting. Neither, really, is Lueli. There are some intriguing characters among the other islanders, but they get short shrift. Mr. Fortune's Maggot is a short book, with some nice passages, and I'm not sorry I read it, but it seems quite a minor effort to me.