A neglected recent SF novel: In the Hall of the Martian King, by John Barnes

Not so Old but sadly all but forgotten: In the Hall of the Martian King, by John Barnes

I have really enjoyed almost everything I've read by John Barnes (born 1957, so two years older than me, and a graduate of Washington University in St. Louis). Barnes seems to me an example of a really good SF writer who for one reason or another has never quite hit it big. Which isn't to say he hasn't got some positive notice -- he's had a couple or three Nebula and Hugo nominations, and he's certainly a well-known SF writer. I first really noticed him (though I'd been reading him already) with the novelette that became the opening of his Thousand Cultures series, "Canso de Fis de Jovent". That's a beautiful story of a society on another planet explicitly based on the Occitan culture (Oc in Occitan as in the "Langue D'Oc", the Romance language spoken in Southern France and in Catalonia, similar to Catalan and French -- the beautiful folk songs collected by Jacque Canteloube as Chants Des Auvergne are in Auvergnois, one of hte Langue D'Oc dialects). The novels in the series chronicle what happens to the Thousand Cultures of human-coloinized space when they are forcibly united after the invention of the "springer" (matter transmitter). But I digress. I liked those books a lot. My favorite Barnes novel, however, is The Sky So Big and Black, a heartbreaking a terribly scary story set on Mars -- in my opinion one of the best SF novels of this millennium, and one of the most unjustly ignored. He's also written some tremendous short fiction -- the best of which may be a remarkable time travel story, "Things Undone".

Another of his projects was a series of (at least at first) YA novels set in a fascinatingly crowded 36th Century Solar System. The series looked like it was planned to continue for several books, maybe to end up as sort of a travelogue of that System, but it stopped at the third book, not really coming to an overall resolution. Still, the books are a lot of fun, and I wish he'd been able to continue them.

This is the review I did in 2003 for SF Site of the third (and last) novel in the series, written while I still though there would be more books in it. 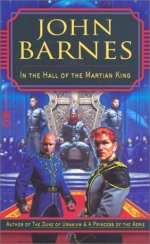 Here is the third novel in John Barnes's ongoing chronicle of the life and times of Jak Jinnaka, a young man in a widely inhabited 36th Century Solar System. The previous two novels are The Duke of Uranium (2002) and A Princess of the Aerie (2003). The first book seemed, in many ways, an hommage to the Heinlein juveniles, with explicit echoes of Starship Troopers, Citizen of the Galaxy, and Have Space Suit, Will Travel. But as Jak grows older, the series has grown darker, more cynical, and decidedly less appropriate for a Young Adult audience. The stories remain great fun, though, at times a romp, at times something more serious -- certainly a set of books I will keep searching out. [Or would have, had the series continued.]

Jak is a citizen of the Hive, a huge space habitat at the Earth/Sun L5 point. In the previous books, we have followed his career as a part-time secret agent, and somewhat of a celebrity, due to his involvement in a couple of high-profile adventures. As this book opens, he has graduated from the Hive's Public Service Academy, and taken a job as Vice Procurator of the Hive's base on the Martian moon Deimos. At the same time he is secretly an agent of Hive Intelligence. His life is further complicated by his continued conditioned lust for his former girlfriend, the sadistic Princess Shyf of Greenworld, a nation of the Aerie (at the Earth/Sun L4 point). All he wants is to be cured of this conditioning, and to get a more exciting job. But his bosses at Hive Intel have a use for him in his present state and position.

The crisis driving the main action of In the Hall of the Martian King is the discovery of a lifelog of Paj Nakasen, the originator of the "Wager", a quasi-religious set of principles that lies at the heart of 36th Century human society. This lifelog was discovered at an archaeological dig in one of many tiny Martian nations. The Hive wants this document, and further, Hive Intelligence wants it separately from the more public Hive. Greenworld wants it, and Princess Shyf is flying to Mars, hoping to use her hold on Jak to gain possession. The Martian King who nominally owns the lifelog wants proper compensation. And there are other players. To make Jak's life harder still, he is ordered to obtain the document for Hive Intel, but to deflect the credit to Clarbo Waynong, a particularly stupid member of a highly placed Hive family. And he must balance the personal and professional desires of his old friend Dujuv, a roving Consul for the Hive on Mars; his Uncle and guardian Sib, who is coming to Mars for his 200th birthday celebration; and the great-great-granddaughter of his current boss on Deimos, who has been seconded to him to gain work experience.

All this leads to an amusing series of comedies of errors, as various attempts are made to obtain (by fair means or foul) the lifelog. Much of the book is rather funny, and much is quite exciting. Barnes gives us an impressive set-piece or two while the McGuffin is tussled over. But it's not all funny -- there is serious speculation about the proper organization of society, and there is some wrenching tragedy as well. Princess Shyf is a truly vicious character, and her involvement is hardly uplifting. Good people die. And the information in the lifelog itself turns out to have potentially catastrophic repercussions for Jak's society.

As with all the novels in this series, the wheels-within-wheels of the plot are almost exhausting, and not quite believable. But Jak is an interesting and ambiguous character, well worth reading about. The action of the books is quite enjoyable, even if not always what it seems on the surface. Barnes tackles some interesting ideas, though I think he stacks the decks of his arguments on occasion. The background details of the social order, the technological underpinning, and the varied cultures of the 36th Century Solar System are just delightfully presented. I'm really enjoying these novels.
Posted by Rich Horton at 5:40 PM