During the 1950s Silverberg was an extremely prolific contributor to various science fiction magazines. Among his most regular haunts were Science Fiction Stories (edited by Robert A. W. Lowndes), and two magazines edited by Larry T. Shaw: Science Fiction Adventures and Infinity Science Fiction. The former magazine emphasized longer stories, one or two novellas or even full-length (but fairly short) novels per issues, and Silverberg had a story in every one of the Shaw issues of Science Fiction Adventures (often under pseudonyms like Calvin M. Knox, Ivar Jorgenson, and Alexander Blade). Infinity was a more conventional magazine, and Silverberg fairly regularly published short stories there (he appeared in about half the twenty issues), but only one novel: Recalled to Life, serialized in the June and August 1958 issues. It didn't get book publication until 1962, with a rather highly priced paperback edition from Lancer: 75 cents, which was very high at that time. (Lancer's 1967 reissue was only 50 cents.) Larry Shaw, by the way, was an editor at Lancer, but at least according to Wikipedia, he didn't join the firm until 1963. 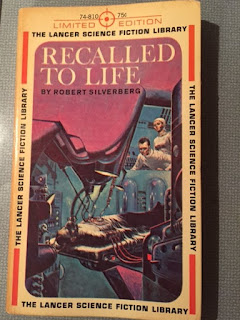 I call this novel "little known" but I should mention that, after its somewhat slow process to original book publication, it has been reprinted a number of times: hardcover editions in the '70s from Doubleday in the US and Gollancz in the UK, and paperback editions from Lancer again, and from Panther in the UK, and from Ace; along with a fairly recent Gateway/Orion ebook, and a print version from Armchair Fiction.

(I've taken a closer look, and it seems that Silverberg actually revised Recalled to Life significantly for the 1972 Doubleday edition. I'll have to get a copy of that, and when I do I'll revise this post again to discuss the changes. I find this heartening, because as I was reading I thought, as noted, that the book was particularly ambitious for late '50s Silvberberg, and I wondered if he might have reexamined the theme later.)

Recalled to Life is set in 2033. The main character is James Harker, the former Governor of New York, who has returned to private law practice after his efforts at reforming the state government got him in trouble, including with his own party, the National Liberals. His main client these days is Richard Bryant, the famous astronaut who was the first man on Mars. Bryant is dying, and has made a will all but disinheriting his loser children. That's not the thrust of the novel, however -- that just sets up one enemy for Harker.

He is soon hired by Beller Labs, an outfit which has developed a process to bring someone back to life if they have died in the past 24 hours. They recognize that this will be very controversial, and they want Harker to help them navigate the storm. He agrees to, in part because of his continuing anguish over the drowning death of his very young daughter years before.

The bulk of the rest of the novel concerns the many issues Harker faces: rebellion from a jealous junior researcher at Beller Labs and also a blowhard PR-type who jumps the gun on revealing the process to the public; moral opposition from, for example, the Catholic Church; the mean-spirited an foolishly executed revenge attempts from one of Richard Bryant's sons; and perhaps most importantly, the difficult political questions. The rival party to Harker's Nat Libs, the American Conservative Party, is reflexively opposed, but, to Harker's dismay, the Nat Libs are hardly unified in favor of the new process, in particular Harker's former mentor, aging senator Clyde Thurman.

More importantly to the intellectual core of the novel, the working out of the opposition Harker faces raises many of the real ethical and practical issues with the treatment. Though Harker remains in favor of the reanimation process, he is forced to acknowledge that some of his opponents have valid points: for example, who will be allowed to be reanimated? The process won't be free, so will it be just for the privileged? And, I wondered, should it be restricted to younger people? It's not a rejuvenation process -- if a sick man dies and is reanimated, he'll die again fairly soon most likely. Of course the Church wonders if the reanimated person's soul will return from heaven. Harker gets many letters from people desperately wanting their loved ones to be saved -- clearly a logistical impossibility, but still wrenching. And finally there are the complications of the process: about 1 in 20 attempts fail completely, which is perhaps tolerable, but more scarily, in about 1 case in 6, the body comes back to life but the brain does not, leaving someone called inevitably a "zombie".

Alas, the resolution of the novel takes a highly melodramatic turn. The Beller people, without Harker's knowledge, commit an horrendous crime (which I found unbelievable on several grounds: first, that they could get away with it; second, that they thought is at all acceptable, and, third, that Harker, despite his fury at their actions, countenances the final result.) And, finally, perhaps inevitably, Harker is forced to take a dramatic personal step to sway the tide of public opinion.

I found the novel worthwile reading on the whole, despite the some messed up ending sequence. It's well and soberly written, and it raises some interesting questions, and discusses them reasonably well (though there was plenty more that could have been said about the whole issue). One of the most ambitious of Silverberg's early novels.