One of the "problems" I've had in recent years of SF reading has been keeping up with novels. That's mostly caused by two things (well, three -- a pretty packed day job schedule contributes as well!): a) I try really hard to keep up with the short fiction published in the field, in support of my Locus column, my Best of the Year volume, and in search of reprints for Lightspeed; and b) I've been reading a lot of non-SF, purposefully, including of course a lot of the "old bestsellers" I review at this blog, as well as a lot of older SF (mostly Ace Doubles).

So I was happy to note that over the past few weeks I've read no fewer than four SF novels from 2017. So I figured I'd do a quick post here with capsule reviews of each of them. The unifying factor, perhaps, is that I've used stories by each of these writers in my Best of the Year books.

This is my favorite 2017 novel to date. Daryl Gregory has published several first rate books already, and some excellent short fiction. But this book looks like it could be his breakout. 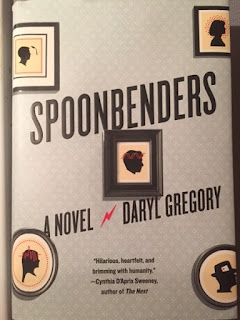 This is about a family of psychics. Or maybe a family of con artists. It's told through the POV of the five surviving members: Teddy Telemachus; his three children, Frankie, Buddy, and Irene; and Irene's teenaged son Matty. The main action is set in June through October 1995. with plenty of flashbacks to the family's previous career -- Teddy meeting his wife Maureen, Maureen's career as a psychic working for the US government, the family's 15 minutes of fame culminating in a disastrous appearance on TV, etc. But everything leads to a culmination in September of 1995, a day which Buddy, who can see the future, has been preparing for all along.

It's a very funny book, but it's also at times heartbreaking. Teddy, we gather quickly, is a con man, a magician; but the rest of the family seems to have real powers, especially Maureen, who can see things at a distance via out of body experience. Her grandson Matty has some like her ability -- complicated by puberty! Frankie has some telekinetic ability, complicated by him being a fuckup. Buddy can see the future, complicated by ... well, I'll let you find that out. And Irene can tell when someone is lying -- complicated by, well, love. Government agents are involved, and mobsters, and a love interest for Irene plus a love interest of sorts for Teddy -- not to mention Buddy and Matty! It's sweet and sad, and wrenching and always absorbing. To me it seems to inhabit above all Michael Chabon territory, while in no way being imitative or derivative. (It's also set in the suburbs of Chicago, which means I recognize the territory -- it's not exactly my home town (a different suburb, Naperville), but it's places that make sense to me ... that doesn't matter to everyone but it worked for me!) I loved it.

Karin Tidbeck has attracted a fair amount of well-deserved attention with her short fiction. She's a Swedish writer, who translates her own work into English. Amatka is her first novel, published in 2012 in Sweden. 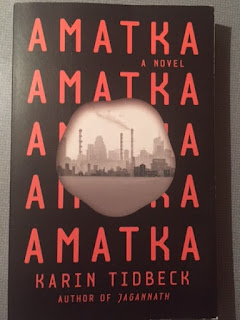 It's a very strange novel, and very effectively so. It tells of a woman named Vanja who comes to a city named Amatka. Amatka is one of four colony cities on a new world -- not, we learn slowly, necessarily a planet but a different world, perhaps a different reality. It seems that in this world the thingness of things needs to be maintained by constant affirmation. Indeed, a fifth colony city was apparently destroyed, perhaps because they forgot to assert reality.

Vanja is in many ways estranged from her society already -- her father was exiled for political reasons; she is a Lesbian, and, more importantly it seems, not interested in having chidren; and she remains inquisitive. In her new city she becomes involved with something like a revolutionary movement -- which seems aimed at accepting the different nature of reality in this word rather than resisting it -- but she is torn because her new lover is not interested in revolution.

The book is fascinating on numerous grounds -- the central idea is cool, Vanja's love affair is movingly and believably portrayed, the oppressive central government is a satisfying evil (and not too overwhelmingly evil), the effect of this reality on art is really well-depicted -- and the nature of this world's nature is an effective element as well. I thought the weak point was the conclusion, which was, as Alvaro Zinos-Amaro put it, emotionally effective but intellectually underwhelming.

Theodora Goss is one of my favorite writers of short fiction bar none. This is her first full-length novel, though she has published one previous book-length story, probably a novella in length, The Thorn and the Blossom, a very sweet and enjoyable love story told from the point of view of both lovers in dos-a-dos fashion and binding. 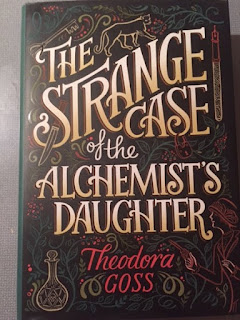 The Strange Case of the Alchemist's Daughter is a good deal of fun. The main characters are a group of women, all daughters (or creations) of fictional Victorian mad scientists: Mary Jekyll, her half-sister (as she eventually learns) Diana Hyde, Catherine Moreau (the puma woman of The Island of Dr. Moreau), Justine Frankenstein (created to be a Bride of Frankenein's Monster (though in the original Shelley novel she was never actually made)), and Beatrice Rappaccini. The action occurs after the death of Mary's mother, at which time she learns of the existence of Diana Hyde, and also of some secrets about her father's experiments, and his scientific associates, that had been kept from her.

Her efforts to rescue Diana from a home for fallen women lead her by happenstance to helping Sherlock Holmes and Dr. Watson investigate the Whitechapel murders. Soon the whole crew is involved, leading eventually to a satisfying and exciting solution. The story is interspersed with sections detailing the back stories of each of the characters. A further device is that the manuscript, evidently composed by Catherine, is interrupted by often snarky comments by each of the women.

As I said, it's a good deal of fun. And it has at its core a strong idea -- the curious fascination of Victorian (and pre-Victorian, in the case of Shelley) writers with what could be called human monsters. All this is tied in, I think, with the evolutionary theories in development, and then under debate, at that time.

So, a pretty enjoyable book. I did have some reservations -- it's kind of a romp. Which is fine -- that's a perfectly good thing for a book to be. But in the process, the plot is on the implausible side at times. There are some liberties taken with chronology, but that's OK -- it's within the author's remit in a book like this to shift disparate timelines a bit. The language, however, is too modern -- I don't expect a perfect echo of Victorian prose -- though, as I'm reading Middlemarch now I can tell you that you could hardly do better than to emulate George Eliot's prose -- but there some really anachronistic turns of phrase that just grated on me. That's a nitpick, however.

Carrie Vaughn made her reputation with a long series of Urban Fantasy novels about a werewolf DJ named Kitty Norville. Those were plenty enjoyable stuff. Since then she's published a variety of novels, and all along she's published lots of really fine short fiction, both Fantasy and SF. 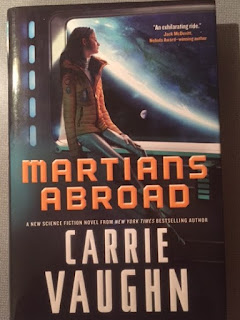 Martians Abroad is a YA novel, seemingly the first in a series, though its plot is resolved quite acceptably in this book. It's told by Polly Newton, the daughter of the Director of the Mars Colony. Polly wants to be a starship pilot, but her mother has different plans for her, and for her rather spooky brother, Charles. They are packed off to the Galileo Academy on Earth, a very prestigious school. (It is supposedly a merit-based school, and it takes Polly rather a while to figure out that "merit=influence", mostly, and that even she and Charles have "influence" in that their mother is the Director of Mars Colony.)

Polly and Charles encounter a lot of prejudice on Earth, as the first Martians to attend Galileo Academy. All this is affecting, but maybe a bit too obvious. They also run into a series of really dangerous accidents on different school activities -- the day only saved by Polly's naive heroism, and Charles' calculated suspiciousness and associated cleverness. Things culminate on the Moon with an accident that's not just dangerous but likely fatal. The novel turns a bit on the revelation of the actual villain -- who turns out to be an at first unexpected but really rather obvious suspect.

I did enjoy this, and I'll be glad to read more stories about Polly. That said, it's a bit slight, and it's definitely pure YA -- which isn't per se a bad thing, but which does, I think, limit the book a bit. (There are YA books which aren't pure YA -- which, if you will, transcend the category.)