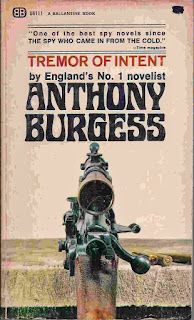 Anthony Burgess (full name John Anthony Burgess Wilson) was one of the major English writers of the 20th Century. These days he is best known for A Clockwork Orange, but many of his other novels are very well-regarded, such as those of the Enderby Quartet. Much of his work was in the comic and/or satirical mode. Certainly the novel at hand, Tremor of Intent, is distinctly funny, and very much a satire.

Burgess was born in 1917 and died in 1993. His family was Catholic. His mother and sister both died in the influenza epidemic of 1918. Burgess was educated at Catholic schools and then at the Victoria University of Manchester (now simply the University of Manchester). He served in the Army in the Second World War, then became a teacher, eventually joining the Colonial Service and teaching in Malaysia and Brunei. He wrote his first novels in Malaysia in the mid-50s. When he was diagnosed with a brain tumor in 1959 he was invalided out of the servce, returned to England, and set about writing as many novels as he could, to leave some money for his family after his soon-expected death. This seems to have established his career as a writer. (Burgess, it should be said, sometimes disputed that account.)  In addition to his writing, he was an accomplished and fairly prolific composer. Once his writing made him financially successful, he spent much of his life outside of England as a tax exile, living in Italy, France, the US, and eventually mostly in Monaco.

I have previously read only A Clockwork Orange, and that a very long time ago. I thought it time to try some more of his novels, and my decision as to which one was made when I happened across a paperback copy of his spy novel Tremor of Intent at an estate sale. Burgess was notably sympathetic to genre fiction, and he was a fan of spy novels -- for instance, I have an edition of Ian Fleming's Casino Royale with a very approving introduction by him. (That noted, Tremor of Intent is rather a send up of the James Bond side of the spy novel category.) It was first published in 1966. My edition is the Ballantine paperback, from 1967, and it declares on the back "Soon to be a major motion picture". No such picture eventuated. (Burgess also wrote a screenplay for The Spy Who Loved Me, though it was not used. He wrote several other screenplays that were produced, of which the most prominent is probably the Franco Zeffirelli film Jesus of Nazareth.) As the title of this review implies, I don't think Tremor of Intent was true bestseller, but it seems to have sold reasonably well, and also to have been well-received critically.

The protagonist of the book is Denis Hillier, a British spy. As the book opens, he is beginning his last mission -- to retrieve a physicist named Roper who has defected to the Soviet Union. Roper, it turns out, was a fellow schoolboy at the Catholic school Hillier attended (presumably a school very much like Burgess's), and the two were close. The first section of the book is presented as Hillier's progress report to his superior, not intended to be delivered, and it includes an extended memoir of his acquaintance with Roper, at first in school, then after the War, when he meets Roper's wife, whom he met while "cleaning up" in Germany after the War, including liberating a camp. It turns out that she is a prostitute, and probably an East German spy to boot. Hillier forcibly separates them (having his way with the wife in the process -- Hillier, as he puts it, suffers from two diseases: gluttony and satyriasis). This section as a whole portrays Roper as a fairly good scientist who is otherwise a serial true believer -- first in the Church, then in reaction to the Church, particularly eventually turning to Socialism.

The second section concerns Hillier's time on the ship taking him to the Crimea, where he will meet Roper at a scientific conference. This for one thing gives him the opportunity for indulging his diseases -- it is a luxury cruise after all, to satisfy the gluttony, and he meets two objects of lust -- a beautiful mysterious Indian woman named Devi, and a lovely girl, Clara, perhaps 16, who seems obsessed with losing her virginity. Other characters include Devi's companion, one Theodorescu, a somewhat sinister stateless man who reveals that his work is finding information and selling it to the highest bidder. He is more than willing (being a pederast) to have Devi seduce Hillier to help him obtain the information Hillier surely has. We also meet Clara's precocious younger brother, who seems to know everything that's going on, and a very funny and very competent -- perhaps too competent -- ship steward. Clara and her brother are worried about their father's health, and their fate should he die, as their unsympathetic and unfaithful new stepmother surely hopes.

The final section brings us to Russia, and to the climax of numerous plans. Hillier consummates his relationship with Clara -- he is threatened by the sinister Theodorescu -- he makes his way to the conference amongst an amusingly incompetent set of Russian officials -- he encounters Roper and learns his latest obsession (he hates England because Queen Elizabeth had one of his Catholic ancestors executed) -- and he learns the true reason for Roper's defection, as well as the truth behind numerous other aspects of the whole situation. The final scene reveals Hillier's entirely appropriate eventual apotheosis.

This is all deeply satirical, in a very cynical fashion. Certainly both the English and Russians, especially their intelligence branches, are portrayed as utterly amoral, and fairly incompetent. It is important to note that it does not really try to be either a realist spy novel (like John le Carre's work) or a spy adventure (like Ian Fleming's work), and if you look for either you will be disappointed. Burgess portrayed himself as a Jacobean royalist (much like the title character of another novel I just read, Henry Esmond!), and he works some aspects of that belief set into the book. It is very funny as well, even when grotesque things happen. There are somewhat over the top sendups of Bondian spy heroics, and absurd portrayals of official incompetence, and a parade of somewhat outre characters who fascinate in their obssessiveness and immorality (Hillier most certainly included), and yet who never quite lose the reader's sympathy, except perhaps for a couple of characters Burgess seems to truly disapprove of (Theodorescu and also Clara's mother). I thought it thoroughly enjoyable, extremely well-written, and despite its purposefully unrealistic aspects, I thought it a fairly serious novel behind the play and the cynicism.