Old Bestseller: Under the Rose, by Frederic S. Isham

Old Bestseller: Under the Rose, by Frederic S. Isham

I don't really think this novel was a bestseller. But it was aimed at that side of the market, no doubt. It was an historical novel, published in 1903, a time of considerable popularity for historical novels, a fashion started perhaps by a book I reviewed here some time ago: When Knighthood was in Flower, by "Edwin Caskoden" (Charles Major). That book was one of the first novels published by the Indianapolis firm of Bobbs Merrill, and the book at hand, Under the Rose, was also published by that company.

Frederic Stewart Isham (1865-1922) had a fairly successful career measured by the number of movies made from his novels and plays. Most successful was probably Nothing But the Truth, which was made into multiple movies, perhaps mostly famously a 1941 vehicle for Bob Hope, Paulette Goddard, and Edward Arnold. He hasn't retained any reputation, though, and it's hard to find much hard information about him online. He was born in Detroit. He apparently wrote nonfiction about Detroit as early as 1896, but the first reference to a novel I can find is The Strollers, from 1902. Thus Under the Rose may have been his second novel. 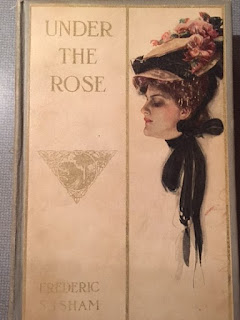 My edition appears possibly a first. It was published in January 1903. It's illustrated, quite nicely, by Howard Chandler Christy, one of the great illustrators working at the turn of the 20th Century. Charles Dana Gibson had his "Gibson Girls", Harrison Fisher his "American Beauties", and Howard Chandler Christy his "Christy Girls". Christy is also famous for his painting "Scene at the Signing of the Constitution", for a portrait of Amelia Earhart, and for Navy recruiting posters. That said, the cover illustration for this book seems absurdly inappropriate for a novel set in 16th Century France. Indeed, to my eyes it looks more like the work of Gibson or perhaps Fisher. (The interiors are much more plausible looking for the 16th Century!) 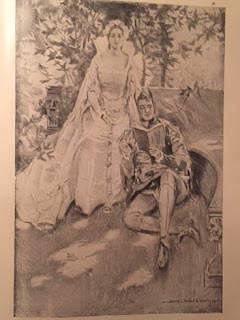 I've previously covered, as noted, When Knighthood Was in Flower, which is set in about 1515 and concerns in part Henry VIII's sister Mary Tudor's brief marriage to Louis XII of France, along with (says the novel) an attempt at her seduction by the Dauphin, who became Francis I. Francis I is a major character in Under the Rose, which is set in about 1530. (To complete the story of France in the 16th Century, I've also reviewed The Helmet of Navarre, set in 1593, and concerning Henry IV of France. who was the first of the Bourbon dynasty, though he was related to the Valois.)

Under the Rose opens among the various jesters of King Francis' court, as they welcome a guest, the jester of the Duke of Friedwald. It seems that the King's niece, Louise, has become engaged to the Duke, who is one of the leading vassals of the Holy Roman Emperor Charles. This marriage will cement an alliance between France and the Empire, which have been at war for decades. The Duke's jester quicky makes an impression, and makes an enemy of the dwarf Triboulet, who had considered himself Francis' favorite.

Soon the Duke's jester becomes a favorite of the Princess Louise, and it's clear pretty quickly that the two might be falling in love. This is an issue, of course, because Louise must marry who the King desires she marry. This also seems an issue for Jacqueline, her maid, and also a part of the "jester's court". Jacqueline is a gypsy girl, it is thought, who was found in the castle after Francis had taken possession, and sent its previous owner, the Constable Dubrois, into exile (where he soon died).

The Duke soon appears -- he's a very rough-hewn warlike man. We soon figure out -- as does the real Duke's jester -- that he is an imposter -- in fact he is the "Free Baron", Louis of Hochfels, a criminal really, who has used his position at a mountainous pass to raid all the travelers passing through, including those who have carried letters from the Duke of Friedwald to his prospective bride.

The jester and the false Duke are quickly at odds, but the jester's position is precarious. Louise is obedient to her King and agrees to marry the Duke. And the jester is soon imprisoned. What follows is an exciting rescue, spearheaded by Jacqueline, and a dangerous race through France, leading to a confrontation between Charles and the false Duke -- and to the revelation, hardly a surprise to any alert reader, of the true identities of both the jester and Jacqueline.

Much of this is ahistorical, of course, which is OK. And I've skipped a few steps of intrigue. It's really a pretty fun novel, with some nice romantic developments, and a few surprises (most of them easily enough guessed, to be sure). Though the specific events portrayed are not really true to history, the general shape of events is correct. The book takes a very negative view of Francis I, probably more negative than his accomplishments deserved. It's also written in a somewhat too modern style for my taste, though perhaps understandably so, and perhaps my revulsion at the use of the term "terrorist" for Louis of Hochfels (a term that didn't exist until the French Revolution, long after the 16th Century, and a term that has a much different connotation now than it may have had in 1903) might be a tad unfair. It's not at all a great novel, but it does what it tries to do nicely enough.