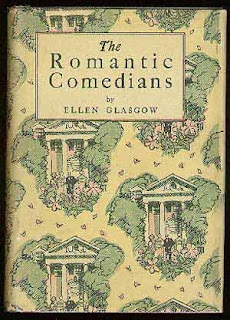 Back to a true quill writer of Old Bestsellers, Ellen Glasgow. Glasgow had the second bestselling novel of 1904 (The Deliverance), the tenth bestelling novel of 1906 (The Wheel of Life), and the fifth bestelling novel of 1916 (Life and Gabriella) -- all according to Publishers' Weekly's list. She also won the Pulitzer Prize for her late novel In This Our Life (1941), which quickly became John Huston's second movie in 1942, starring Bette Davis and Olivia de Havilland. The novel at hand, The Romantic Comedians, wasn't one of the very top bestsellers of its year, 1926, but I'm sure it sold quite well, and it was one of the very first Book of the Month Club selections (the Club was created that year).

Ellen Glasgow (1873-1945) was born into a fairly prominent Richmond, Virginia family. She was educated at home due to poor health, and began writing fairly early. Her first novel appeared anonymously in 1897 (delayed due to her mother's and brother-in-law's deaths). It portrayed a woman who rejected marriage in favor of passion, says Wikipedia. And indeed, Glasgow never married but had several affairs of some length. She was for a time a suffragette, but did not seem to stay active politically -- however, her novels seem to have often tackled significant social themes. She was a close friend of another Richmond writer, James Branch Cabell.

She seems one of those once prominent writers now nearly forgotten (though, as I note later, not really entirely forgotten). After all she had a lot of commercial success, and some critical success too as evidenced by the Pulitzer. But I really knew nothing about her -- just enough to have a sense when I saw this book at a sale that her name seemed vaguely familiar. (Wikipedia does say that Marjorie Kinnan Rawlings planned a biography, but died before she could complete it.)

While most of her novels seem to have been deathly serious -- her second novel was called "sodden with hopelessness all the way through", and many of her other novels seem depressing on a look -- this one, as with other late ones, is not so dark. But the title of The Romantic Comedians suggested it might be, well, a romantic comedy. It's not, really, though it's not exactly depressing, either. Apparently after her ambitious 1925 tragedy Barren Ground, she decided to turn to somewhat lighter subjects for her next couple or three books.

This book, then. the one immediately succeeding Barren Ground, concerns Judge Gamaliel Bland Honeywell, a 65 year old lawyer in Queenborough, Virginia. His wife Cordelia died a year before the action of the novel, and we soon gather that she was a worthy woman who took good care of him and kept him in order -- but perhaps that she wasn't his great passion. And soon we see Amanda Lightfoot, still beautiful at 57, who was briefly engaged to the Judge 37 years before, before a quarrel and her sudden departure to Europe. He followed her, but met Cordelia on the ship. Amanda has never married, apparently still carrying the torch for the Judge. But somehow Gamaliel doesn't quite feel up to visiting her.

The other characters soon enter. One is his scandalous sister Edmonia, who has buried three husbands and left the fourth. Now she's back home, only too ready to give Gamaliel advice. And too there is impoverished widow Bella Upchurch and her beautiful daughter Annabel, who herself was just jilted by her fiance.

This sets the scene, and what follows is predictable: Gamaliel takes an interest in Annabel Upchurch, and soon is making something of a fool of himself over the young woman. Her mother, desperate to save the family situation, urges Annabel to marry the Judge, reasoning that she's lost her "true love" and she might as well settle for money. Edmonia thinks her brother should court Amanda Lightfoot, but he won't listen. The reader might come to the conclusion that Bella Upchurch, a pretty woman of an age somewhat more appropriate for Judge Honeywell (late 40s) might be a better match than her daughter. But the May-December marriage goes through.

And the result is much as one might predict. Annabel isn't much of a wife to Gamaliel, and she doesn't really care much for him. And, of course, she's young, and there are other young fish in the ocean besides her caddish ex-fiance. And, after all, the Judge doesn't care to dance those fashionable '20s dances with her ...

Well, it's easy to see where this will end up. And so it does, really in a fairly sensible fashion. The disappointment is, perhaps, that it's too sensible. There is no great romance here. There is no sprightly comedy either. Amanda Lightfoot turns out to be rather a crashing bore. Bella Upchurch is just not the right woman. Edmonia is entertaining but really doesn't have enough of a role.

I ended up with the impression of a well-meaning, well enough executed, novel that I really didn't much like. It's possible that I was looking for the wrong thing -- clearly Glasgow was interested in (fairly gentle) satire, and I may have been after more of a love story -- if so, my fault. Still, I didn't find the satire biting enough, or perhaps just not funny enough (except every so often in Edmonia's scenes).

I would suggest that Glasgow was very much a writer of her time, and perhaps too serious a writer for her talent. That is, if she was more of a writer of entertainments, her work might have lasted at some level. And if she was a greater writer, it might have lasted. But as an ambitious writer who didn't quite have the chops -- she falls into sort of a gap. And having said that, I should note that she's not as forgotten as all that. The University of Virginia reissued a number of her books in the 1990s, and I think she still gets some academic attention, both from the "Southern writer" angle, and the "Early Feminist" angle.