Another Ace Double: The Man With Nine Lives/A Touch of Infinity by Harlan Ellison 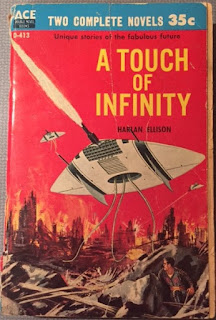 Not quite ready for my next Old Bestseller, so let's dip into my backlog of Ace Double reviews with one by a really major writer. I wrote this some years ago, so some comments are slightly out of date, and I'll note where they've changed. 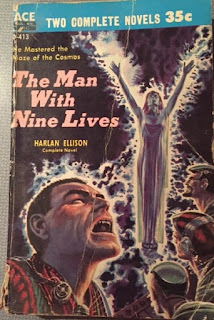 The only SFWA Grand Master who wrote an Ace Double that I haven't yet covered in this series of reviews is A. E. Van Vogt. I'll get to him -- but not yet. Now I'm dealing with a writer who is not yet a Grand Master, but who will surely be one soon. [And indeed, Ellison was named a Grand Master in 2006. Gene Wolfe made it in 2013 (much much later than he deserved) and Michael Moorcock in 2008. In all, nine Grand Masters who wrote at least one Ace Double were inducted later than A. E. van Vogt, the last of them being Samuel R. Delany.]

I admit I was shocked that Anne McCaffrey was named a Grand Master this year [2005 -- the year before Ellison was named] before such obviously superior choices as Gene Wolfe, Michael Moorcock, and the subject of this review: Harlan Ellison. (Ellison, it might be noted, was a pivotal figure in securing Van Vogt's recognition as a Grand Master.)

This book pairs his first story collection with one of the very few novels Ellison has written. His first novel was non-SF, Web of the City (1958), based on his experiences after joining a street gang. So The Man With Nine Lives is his first SF novel, and arguably his only one. (I have the perhaps mistaken impression that Spider Kiss (1961) is not SF. Doomsman (1967) was so bad that he destroyed copies of it for a while -- and as it was a Belmont Double it may not have been novel length [indeed it is not novel length]. And that's it for book-length SF from Ellison by himself!) The Man With Nine Lives is about 44,000 words long, and it is expanded from a shorter story, "The Sound of a Scythe", with another story, "Assassin!", also included.

Cal Emory is a desperate man. As the novel opens, he is trying to kill Paul Lederman, but Lederman has the jump on him. Through flashbacks we learn why.

It seems that Emory and Lederman were college roommates. But Lederman, son of a rich man, stole Emory's girlfriend, married her and then drove her to suicide, then engineered a cheating scandal that was blamed on Emory, getting him expelled. Lederman then hired Emory at his company (his father having died), supposedly out of charity. Emory finally figures out the truth and decides to kill Lederman.

However, he decides, unconvincingly, that he first must find a man named Patooch, apparently the ONLY person in the universe who can surgically alter him so that Lederman will not be able to find him. It turns out that the uber-villain Lederman has arranged for Patooch to be sent to "deepsleep", this future's replacement for prison. So Emory agrees to serve half of Patooch's sentence. Then we learn what "deepsleep" is -- which is a cute but silly idea. The computer that rules Earth and its colonies uses the minds of convicted felons, whose bodies are frozen, to be telepathically projected into aliens in order to prepare the Galaxy for future human advancement. Thus, Emory is sent to several different "alien" bodies to do various things to help Earth's future -- things like influence an alien species to exterminate a plant that will be poisonous to humans when they eventually encounter the planet. One of these episodes is the story "Assassin!" (Science Fiction Adventures, February 1957), retitled here "Travelogues Two: In Delpheron's Armada". This story has essentially no reason to be included in the novel: it is completely independent (and a tolerable story though no more than that, about a man sent to kill a sort of Genghis Khan of Space, complete with a nice ironic ending but not much interest until that point). The other travelogues make more sense, and the concluding one actually holds the seeds for the novel's ending. Which is OK, nicely enough set up and if not convincing at least acceptable on the terms of the story.

The story collection, A Touch of Infinity, gathers six early stories, a novelette and 5 shorts, totally about 40,000 wordss. I'll cover them one by one.

The alien Kyben have made a breakthrough into human space and have overrun Deald's World. The resistance needs to escape to warn Earth, and their only hope is to plant a "Sun Bomb" inside a man who will run from the Kyben long enough to give the others a chance to get away. Yeah, that didn't make much sense to me, either. Another important point is that they choose a drug-addicted loser, on the grounds that he's such a coward he'll keep running, and keep the Kyben chasing him. The story really turns on a nasty closing twist, which is OK but doesn't really seem to justify 14,000 words.

An inventor creates an intelligent robot, which is taken by the government for use in testing a starship. The bitter inventor makes a slight modification to the robot, causing it to make a certain demand on his return from the stars. The gimmick is incredibly lame, and a pretty old idea, and I don't believe in the results of it anyway! A pretty weak effort.

Ellison's second sale. A decent piece. Another Kyben story, though it needn't have been. A space pilot is marooned in a Life Hutch on an asteroid. He needs to activate the distress beacon, but the controlling AI has gone mad and attacks anything that moves. The puzzle is -- how can the guy move to activate the distress beacon. The solution is OK. The setup is awfully damn strained, however.

Ellison calls this a change of pace story. Maybe. One night astronomers detect hundreds of objects burning up in the atmosphere. They manage to intercept one, which turns out to be a majestic alien creature. The creature communicates telepathically, and a few sensitives hear its message. Which causes them to commit suicide. I wasn't convinced by the reason.

A great hunter goes to an alien planet and witnesses a strange "hunt" in which the aliens seem to give themselves up to the prey. He decides he needs to hunt this animal, show the aliens that he's stronger. With predictable results. Actually, the story is well-framed, around a grand trophy, the hunter's "final trophy", the nature of which is easily guessed, but still works OK. I wasn't fully convinced by the explanation, but still I thought the story OK.

Another very early story, Ellison's third or fourth to be published. A tortured scientist is exploring an alien world and gets captured by a native. The native is intelligent, but wants to eat him. The scientist could kill the native, but wants to find a better solution, and eventually he does, finding redemption of a sort in so doing. Not bad minor work.

On the whole, this is a pretty negligible set of stories -- as the novel The Man With Nine Lives is also negligible. It is possible to detect the seeds of Ellison's mature style -- these stories are certainly fairly flamboyant, and generally deal with desperate characters. It's worth noting that Ellison was extremely prolific in the lower end SF magazines through about 1959, then fell silent for three years (though I believe he was working in other genres and in TV), resuming at a slower rate of production with much better stories, including award winners like "Repent, Harlequin, Said the Ticktockman". In one way his career could be compared to those of Brunner and Silverberg -- writers who produced competent work at a frenetic pace through the mid to late 50s (or into the mid-60s in Brunner's case), then slowed down and began doing far better work in the mid-60s. However, it seems to me that Ellison's early work was less accomplished than that of either Silverberg or Brunner. It's really seems to me that the Ellison of the mid-60s, say from "Repent Harlequin" on, is an almost completely different, and enormously better, writer than the early Ellison. As I've said, you can see seeds of the later Ellison in the early stuff, but only seeds, only hints. This early work is slapdash, scientifically absurd, careless, pulpish, and the prose may try hard but fails to have much impact.