A Lesser Known Donald Westlake Novel: The Spy in the Ointment

A Minor Westlake Novel: The Spy in the Ointment, by Donald Westlake 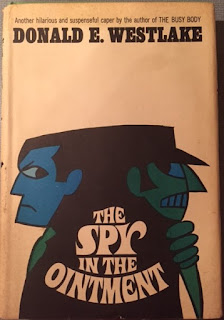 Donald Westlake (1933-2008) was a very prolific writer, mostly of crime fiction. I am a huge fan of his comic crime novels about the thief John Dortmunder, which began with The Hot Rock (1970). His other famous series character was the thief Parker, who appeared in a great many decidedly non-comic novels, published as by "Richard Stark". Several movies have been made of books from both of those series, as well as a few other Westlake books. Westlake himself wrote screenplays, winning an Edgar for the one for The Grifters, an excellent movie based on a Jim Thompson novel. Westlake won two other Edgars, for his short story "Too Many Crooks" and for his 1967 novel God Save the Mark.

The Westlake novel directly preceding his first Edgar winner was the novel at hand, The Spy in the Ointment. I don't have any idea of its reception, though he had already made something of a name for himself, with the early Parker novels (alas, the name he had made for himself in that case wasn't his own!), and with novels like The Busy Body. But I don't get the sense that The Spy in the Ointment is that well remembered. And more or less I'd endorse that -- while I was entertained by the book I wasn't thrilled by it. It's mostly a comic novel, and reasonably funny, but not even close to as funny as the Dortmunder novels. And its plot never really convinced me.

It's told by J. Eugene Raxford, Chairman of the Citizens' Independence Union, a tiny group which advocates pacifism. Gene is 32, not making a lot of money, his organization fairly hapless. Though he does have a very beautiful and very rich girlfriend, Angela. As the story opens he is battling a recalcitrant mimeograph machine when he is visited by Mortimer Eustaly, a slightly sinister appearing man who invites him to join forces with his group, which is in fact an amalgamation of terrorist groups, each with radically different viewpoints (some crazy leftists, some crazy right wingers, some just crazy). Eustaly thinks that even though they have different views, they can agree on certain violent actions best performed with more resources. The problem is, Gene's group is pacifistic, not terroristic. But Eustaly won't take no for an answer, and it becomes clear, especially when the FBI gets somewhat incompetently involved, that the best course is for Gene to play along.

Angela insists on accompanying to the meeting. She's a pacifist rebelling against her father's wealth (built on munitions) -- it turns out her brother is also rebelling against their father's views, but he's a violent psychopath, last seen in North Korea. So guess who turns up at the meeting? Gene and Angela flee in terror after her brother (Tyrone) sees her; and they end up in the arms of a mysterious government organization, which decides Gene should pretend to have murdered Angela, who will go into hiding, and then rejoin the amalgamated terrorists ...

And so it goes, with Raxford undergoing a brief course in using violence, and getting properly equipped with various weapons, and indeed he gets back in good with the bad guys, and soon is well on his way to collaborating with their nefarious plot, which begins with blowing up the UN building. Alas, the special equipment he's been giving proves useless, and he is forced to use his wits and even, perhaps -- if he can bring himself to it -- violence.

It's enjoyable enough, but not as good as my favorite Westlake novels. There are certainly some funny bits (I liked the letter system for naming all the Federal agents he meets, and the initial meeting of all the various terrorist groups was pretty funny). But the plot ends up not really convincing -- the intricate twists of the Dortmunder capers aren't really duplicated here. And though it's comic enough it spots, it's not as laugh out loud funny as other Westlake. Decent early career work, I suppose.