I've featured Ace Double reviews in this space before, but those were reposts of reviews I did some years ago. This is my first new Ace Double review in several years -- it features two novels that, I think, really are mostly forgotten by now.

This is yet another Ace Double featuring a pretty good early John Brunner novel (under his most usual pseudonym), this time paired with an early piece of scientifiction from one of the more respected writers of Gernsback era stuff. 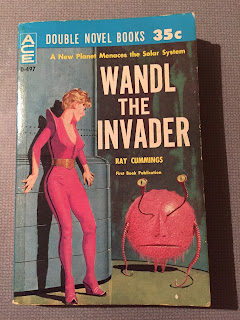 We'll begin with the Ray Cummings book. Cummings was born in 1887 and died in 1957. He worked for Thomas Edison from 1914 until 1919 as a technical writer, which gave him a certain cachet in writing about scientific subjects. By far his most famous work, still slightly remembered, is the novel The Girl in the Golden Atom, which was serialized in All-Story Weekly in 1922, as an expansion of a short story of the same name that appeared in All-Story in 1919. The short version of this piece seems to have been Cummings' first fiction, and he continued writing stories in that vein, mostly in All-Story and in Argosy, which eventually absorbed All-Story, but also in other magazines of the era such as Astounding and also Hugo Gernsback's Science and Invention, one of the magazines he published before starting Amazing Stories. Cummings continued to publish even after John Campbell's revolution mostly superseded the sort of fiction he wrote, though he stopped publishing serials. He did write any number of short stories for the SF pulps like Astonishing and Thrilling Wonder until his death.

Wandl the Invader was serialized in Astounding in 1932. It was a sequel to Brigands of the Moon, which began its serialization in the third issue of Astounding, in 1930. It is set in a future in which space travel is well-established within the Solar System, and essentially human civilizations have been discovered on both Venus and Mars. (Interbreeding is possible, for instance.) A small planet called Wandl has appeared in the Solar System, and Gregg Haljan (hero of Brigands of the Moon) is recruited to captain a spaceship to resist the evil intentions of the planet's inhabitants.

The opening sections have some interesting ideas and images, such as a roofed New York. Haljan and his buddy Snap, along with their girlfriends, Anita and the Venusian Venza, first investigate the appearance of a Martian pirate and his sister, Molo and Meka. It turns out the Martians are in league with the invaders from Wandl, who turn out to comprise controlling all-brain creatures, who are carried around by huge humanoid entities. Wandl, it turns out, has a sort of massive tractor beam technology, and they are planning to grab Earth, Mars, and Venus and tow them back to the Wandl home system.

The girls are kidnapped by the Martians (Molo seems to fancy them), and Snap seems to be killed. Haljan joins his ship and blasts off to fight the Wandl ships, but they are too powerful, and he ends up captured as well. Naturally they end up on Wandl, where they learn something of the Wandlian social organization, and the Great Intelligence ruling everything, and they end up finding their way to the single point of failure of Wandl ...

Well, you see where this is going. It's really stupid stuff. You can see that Cummings had talent -- his ideas were silly but sometimes intriguing, and his prose was effective pulp work, not at all nice but fast moving, with occasional interesting images -- much better than the run of Gernsback era writers. The plot, however, is just routine, never believable. This story and a fewer other early Cummings pieces were resurrected by Don Wollheim at Ace shortly after Cummings' death. One suspects, uncharitably, that Wollheim got a good deal from the estate. I'd say the stories really deserve to be forgotten, by and large. 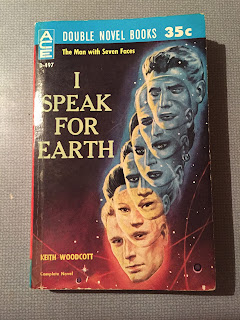 I'm on record as being very fond of John Brunner's early work. It was by and large efficiently executed, with interesting central ideas, usually pretty thoughtful, marred mostly by a certain hurriedness, especially in coming to a conclusion. I Speak for Earth fits those parameters, maybe biased a little more towards the thoughtful end of things. As noted, it was published as by "Keith Woodcott", a pseudonym he used quite often, for short fiction and novels, in his early career.

This novel isn't entirely forgotten, by the way: Mike Resnick praises it in his book Resnick at Large, where he confesses that he didn't much like Brunner's writing, but he did like this short novel by one Keith Woodcott, and was gobsmacked to learn that Woodcott was a Brunner psedonym.

I Speak for Earth revolves in one way around a very familiar idea: the alien Federation of Worlds has discovered Earth. They are quite perturbed by humanity's history of violence, but improvements are being made. Still, before they allow the first human starship to be completed, they want to evaluate humanity's worthiness to join the Federation. To that end, they have asked us to choose one representative to travel to a Federation world and spend a month there -- after which that person's behavior will serve as a benchmark for the decision on whether humans can travel to the stars, or whether we will be penned up in the Solar System. Obviously, this isn't a new idea -- it had been used, pretty much, in for example Robert Heinlein's Have Space Suit, Will Travel, only three years before.

The neat wiggle Brunner introduces is this: humanity's leadership (the UN) decides that it is ridiculous to send just one human as a representative. So they choose six people, very accomplished people from a variety of cultures, who represent a variety of high achievement, and use a newly developed technology to allow one man's mind to host five additional minds. The viewpoint character is Joe Marea, a very talented engineer, one of the leading workers on the starship project. He is to be the physical host for the other five minds, two women and three men (the women from India and China, the men from Russia, Africa, and Germany via the US). Joe is also newly in love, with a beautiful and brilliant woman, who he doesn't realize has been deputized to evaluate his fitness for the project.

The bulk of the story covers the time the six people spend together, learning about each other, then (by surprise) being integrated into one mind. This is pretty interesting stuff, and well done. The integrated individual is then produced as the Earth's representative to the Federation of Worlds (while in the background some rather disquieting reaction of extremists on Earth is portrayed). Joe-etcetera goes to the Federation world, and the last few chapters depict their experience there, where they are treated quite unfairly ... but of course prevail. I thought this concluding bit came off maybe a somewhat too pat, but it's still a pretty decent story.