The Vanishing Point, by Coningsby Dawson 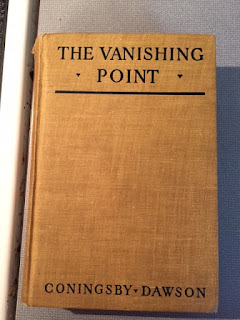 I suppose this is another example of Canlit. Like a number of Canadian writers, Coningsby Dawson was born in England (in 1883) and moved to the United States. He began writing in the US, at first reports on Canadian subjects for English newspapers. He also published poetry and novels. When World War I broke out, he went to Canada and offered his service to that nation. He was commissioned as an officer after a period at a military college, and went to France in 1916. He served in the trenches, and was wounded twice.

After the war he wrote a memoir of his experiences, apparently intended in part as a reaction to the many very disillusioned memoirs of soldiers. Even so, his reaction did not slight on description of terrible conditions and events.

The Vanishing Point was published in 1922. Rather a strange novel, this one. Published just after the First World War, its subject is indeed the aftermath of the war. My edition is from Cosmopolitan Book Corporation, a venture associated with the magazine. It's probably a first. It is illustrated by James Montgomery Flagg.

The book opens with the American Philip Hindwood on a liner bound for England. He has been dallying with an exotic woman named Santa Gorlof, but he has a rival, Prince Rogovich of Poland. At the end she seems to choose the Prince, but when they disembark, the Prince is nowhere to be found. He and Santa soon find themselves on the run, for she at least is suspected of having murdered the Prince. Hindwood himself is still fascinated, but convinced as well that she may have done it.

He is engaged on a plan to sell food to the starving states of Central Europe in exchange for control of their railways. But soon he encounters Santa's husband, an Englishman who rescued her from dancing in an Indian temple, where she was raised as a half-caste orphan. He is forced to abandon her after she murders the man who kills their baby son, and in revenge of a sort, she has pursued a career as an exotic dancer, meanwhile killing the men she believes are responsible for the deaths of children, expecially those who promote war. The Prince, a monarchist displaced by the results of the War, is one such. Santa's husband reveals that he intends to bring her to justice, despite that he still loves her.

In a fool's errand trying to protect Santa, Hindwood ends up meeting another beautiful woman, Anna Varensky, the English wife of a saintly Russian fanatic. Her husband has disappeared, in another of his Quixotic attempts at martyrdom, always trying to prevent war and violence, this time in Bolshevik Russia. Soon Anna and Hindwood are in love, but both are too honorable to take action while Varensky lives. And indeed, Varensky returns, and Anna accompanies him back to famine-ridden Central Europe, which is on the brink of another war, provoked by monarchists, and the flames fanned by those fleeing the ruin of the Bolshevik dream. (The book seems to diverge a bit from history here ... perhaps it was actually set in the very near future to its writing?)

Hindwood and Santa also make their way to Austria then Hungary, with Hindwood's food trains to follow. He intends to complete his plans for control of Europe's railroads, but Santa urges him to act morally, and give the food away, and the sight of the starving masses begins to work on him. In Budapest things come to a climax, with people in pursuit of Santa arriving, with the monarchists plotting, the refugees and hungry swarming, and the Varenskys in the mix as well. The resolution is on the one hand heroic, on the other hand quite odd.
Posted by Rich Horton at 10:50 PM