The Maid of Maiden Lane, by Amelia E. Barr 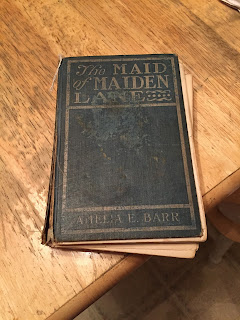 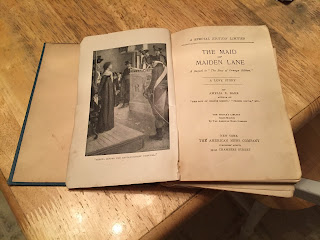 Back to the heart and soul of this blog ... a very obscure book from the first half of the 20th Century (well, technically, from the very last year of the 19th Century) that was fairly popular in its day. This book, like many other such books, isn't tremendously rewarding (in my opinion) to a 21st Century reader, but it's well enough done on its terms, and one can see why the author had a bit of a reputation in her day.

Amelia Edith Huddleston was born in Lancashire, England, in 1831. She married William Barr at the age of 19, and four years later they moved to Texas. By 1867 the couple had 6 (or 7, or 9) children, but in that year her husband and three of the children died of yellow fever. Mrs. Barr and the three (or perhaps four) remaining children moved to New Jersey. She soon began to publish short fiction and religious works, and by the mid-80s was publishing well-received and strong-selling novels like Jan Vedder's Wife and Remember the Alamo. Her primary focus was historical romance. She died in 1919, having written by one count 63 novels, by another count (her Publishers' Weekly obituary) 80 novels. She was well enough known to rate a New York Times obituary as well as the PW obit.

The book at hand is The Maid of Maiden Lane, from 1900. It is apparently the sequel to a well-received earlier novel, A Bow of Orange Ribbon (1886). My edition of the book is part of something called "The People's Library", issued by the American News Company, and it is called "A Special Edition Limited", so I suspect it's not a first edition, but its appearance and wear suggest it dates to more or less the original time of publication. This book is illustrated. The artist is not credited -- the name might be Hedges. My copy was evidently a Christmas present -- it is signed "Bruce Lee Hutcheson from Ione Marie Williams, Dec. 25, 1901" in a rather nice hand.

It is set in 1791 in New York. The titular "Maid" is Cornelia Moran, the beautiful daughter of a man of French descent and a woman of Dutch descent. The hero is a somewhat cocksure but mostly fairly nice young man, Lieutenant George Hyde, of mixed English and Dutch descent. (The ancestry of these people turns out to be of much importance! Indeed George's Dutch mother calls him Joris.) They encounter each other and quickly fall in love, but their fathers, the respected Dr. Moran and the also respected General Hyde, are bitter enemies, partly because they are French and English, also because Moran feels Hyde disrepected him while both were serving under now President Washington during the Revolution.

The main political issue in the United States is whether the Capitol will be in New York or Philadelphia, but the more important poltical issue for this book is the French Revolution. Some (Thomas Jefferson, the Morans) support it, others (John Adams, General Hyde) oppose it, especially as news of atrocities reaches the US. Cornelia's close friend is Arenta van Ariens, a pretty but somewhat vain Dutch girl, about to be married to a French Marquis. Arenta's brother Rem (as in Rembrandt) is in love with Cornelia. There is a fair amount of leadup to Arenta's marriage (she's a bit of a Bridezilla), along with the rivalry of Rem van Ariens and George Hyde. Arenta marries and moves to France, and soon finds herself in terrible danger. Meanwhile Rem and George both plan to propose to Cornelia, while George's father desires him to marry his cousin, the saintly Annie. This becomes more critical when Annie's father dies, meaning the George's father is the heir to an Earldom.

The critical turn comes when Cornelia's responses to Rem's and George's respective letters of proposal are misaddressed. George gets a rejection, and quickly heads to England. Rem's letter is clearly for George, but the cad does not send it on to him. This leads to agony for George -- and no good result for Rem either.

The rest of the book turns on the events that lead to the discovery of Rem's bad behavior, in which Annie plays a critical role. There is also business revolving around Arenta's dramatic fate in France, and side plots such as Cornelia's Aunt Angelica and her long lost husband. It's a pure romance novel, a bit silly, with main characters who really don't convince and have little chemistry, but with enough going on and effectively enough written that it passes the time. There is a lot of guff about ethnic differences, never really becoming offensive -- indeed, the characters' attitudes are viewed as mildly reprehensible. (The black characters, I should perhaps add, are all slaves, but portrayed with respect (though with little notice) -- one certainly might argue that this was a fairly accurate portrayal of contemporary attitudes and situations.) The attention paid to details of clothing (for both the men and women) is fairly noticeable -- to me this marked the novel as distinctly a piece of "women's fiction". Ann Leckie noted, in an unrelated discussion when the book came up, that women of the time (1900, as well as 1791) were often making their own wardrobes, and these details were possibly not only of general interest to them but of some practical use.

As with so many of the books I've covered, this is a book whose contemporary popularity, in retrospect, is not surprising -- but which doesn't really seem likely to ever again attract any wide readership.
Posted by Rich Horton at 7:27 PM