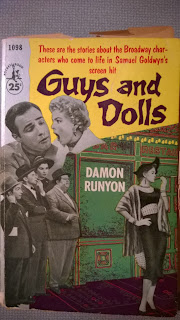 Damon Runyon (full name Alfred Damon Runyon) was born in 1880 in Manhattan, KS -- perhaps a sign that he would end up closely associated with the more famous Manhattan. He became a newspaperman, getting his start in Colorado, but by 1910 he was in New York. He was a sportswriter (even in Colorado), and in New York he covered the Giants baseball team. He also covered other sports, notably boxing and horse racing, and harder news such as the Pancho Villa raids (during which he met the woman who broke up his first marriage and became his second wife). He was an acquaintance of Villa, and one of his closest friends was a mobster. He became most famous, eventually, for his short stories about the criminal element in New York. He died of throat cancer in 1946.

His career somewhat resembles his near contemporary Ring Lardner, who was also a sportswriter who later became well-known as a writer of short fiction, and who also was known for writing in an exaggerated vernacular. (Lardner of course was associated with Chicago and not New York.) (Contemporary SF readers will recognize Runyon's style in a number of recent pastiches written by Mike Resnick.)

Runyon's short stories were mostly set in New York, in a milieu of small-time gamblers and gangsters. The style is immediately recognizable -- always present tense (somewhere it is claimed that there are something like three instances of the past tense in his oeuvre), with an engaging mixture of extravagant slang, formal diction, and strange nicknames. There are a number of oft-repeated phrases -- "at that", "ever-loving wife", "more than somewhat", etc. The effect is primarily comic, as well as often somewhat sentimental. His work became even more famous with the 1950 musical Guys and Dolls, and with the 1955 movie version of the musical, starring  Marlon Brando, Jean Simmons, Frank Sinatra and Vivian Blaine. The book I'm covering here is the Pocket Books collection called Guys and Dolls, from 1955, issued to coincide with the release of the movie. The book comprises most of the text of Runyon's 1932 collection also called Guys and Dolls, with three stories deleted and replaced by five stories "about the characters in the show". In fact the first of these stories, "The Idyll of Miss Sarah Brown", is the primary source material for the musical and the movie. (Another story from the original collection, "Blood Pressure", is another source.) It's clear that the title of the musical was not based on the Runyon book, but is just a useful phrase common to Runyon's work that nicely characterizes the show.

"The Idyll of Miss Sarah Brown" perhaps serves as an exemplar: Sky Masterton is a gambler who will take just about any bet, and when he falls in love with Sarah Brown, a beautiful young woman working to save the souls of the lost folk of Broadway, he starts betting people their souls against making a certain craps throw. In the end of course he loses these bets -- but wins Miss Sarah Brown.

The stories often end in such a sentimental way, with a good (or mostly good) woman winning the heart of a fairly bad man (and at least to an extent reforming him). Of course that's not always the case -- Nicely Nicely Jones' marriage in "Lonely Heart" is certainly a counter-example! There are also a number of stories centered more closely on actual criminal enterprises -- often featuring the unnamed narrator getting involved against his will in the schemes of one of the more dangerous locals. The tone remains always comic -- but the stories don't always resolve in the most optimistic of fashions. But throughout this is very entertaining work -- if you enjoy the voice, you'll enjoy the stories. I'm not sure how many in a row one can really read without the effect palling -- but taken in small enough doses it's pretty fine stuff.
Posted by Rich Horton at 9:29 PM