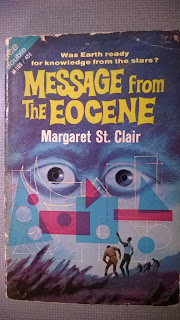 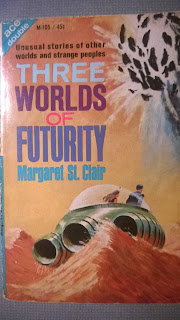 I guess I'll make it official ... I've gotten into reading Ace Doubles again ... a number of years ago I did over 80 Ace Double reviews, first at the great Usenet newsgroup rec.arts.sf.written (how I miss it -- I know it still exists, but the magic of the Golden Age (late '90s to early '00s) is gone), then posted at my webpage (www.sff.net/people/richard.horton). I'll still be doing reviews of Old Bestsellers here, but I don't have a backlog anymore, so I'll post them when I finish new (old) books, and interleave them with some more Ace Double reviews.

Margaret St. Clair (1911-1995) was one of the more noticeable early women writers of SF, but somehow her profile was a bit lower than those of C. L. Moore, Leigh Brackett, and Andre Norton. Perhaps it was simply that those writers did just a bit more, and were just a bit better (taken as a whole) than her, but it does seem that she's not quite as well remembered as perhaps she deserves. One contributing factor is that she published many of her stories pseudonymously, as "Idris Seabright". 20 or so of her 50+ short stories were as by Seabright, including some of the very best (such as "Short in the Chest" and "An Egg a Month from All Over"). She also wrote 8 novels (four of them published as Ace Double halves). Her career in SF stretched from 1946 to 1981. Her husband, Eric St. Clair, was also a writer (of children's books), and the two became Wiccans more or less when the Wiccan movement started.

This Ace Double appeared in 1964. I read the novel half, Message from the Eocene (which is about 43,000 words long), several years ago, planning all along to add it to my Ace Double Reviews page, but somehow I never got around to the story collection half. That leaves me in the slightly embarrassing position of not remembering the novel at all well. I remember a slow start, and fascinating middle, and a disappointing end. The start concerns a creature named, of all things, Tharg, struggling to protect a significant booklike object from evil rival aliens, on a planet we deduce is Earth of long ago. Tharg, having saved the book by throwing it in a volcano (or something), is killed but survives as a disembodied being until humans have evolved and reached a sufficient level of intelligence to benefit from the knowledge in the "book". The second section, which I recall being the best part of the book, is set in the near past, as Tharg "haunts" a house that becomes suspected of being a witch's abode (or something). One of the women ends up urging discovery of a mysterious object ... which of course is Tharg's "book". But its knowledge remains opaque. The resolution occurs in the future, as a spaceship is launched, Tharg is reembodied, and the humans realize that inimical aliens (Tharg's enemies) on Pluto must be destroyed, after which the "book" can be "read" ... and the novel ends more or less at this climax, which hints at coming transcendence but doesn't get there. Apologies for the vagueness!

I finally read the short story collection, Three Worlds of Futurity, on the plane heading to the 2015 World Science Fiction Convention, Sasquan. It comprises 5 shorter works:

(The covers, by the way, and the interiors for the collection, are by Jack Gaughan.)

The title refers to the fact that the first three novelettes appear on, respectively, Venus, Mars, and Earth, I assume. As a whole the collection is pretty worthwhile work. Here's a look at each of the stories:

"The Everlasting Food" opens with Earthman Richard Dekker at the hospital where his Venusian wife Issa has been taken after an accident. It seems that she will die unless she has a brain operation, but that operation will remove her ability to "See" -- a special ability she has because she is one of the ancient "Sanedrin" (I don't know if the echo with "Sanhedrin" was intended). Dekker decides to insist on the operation. Issa at first is devastated by her loss of "Seeing", but somehow she has gained something else: the ability to be nourished by only energy. It seems that she has gained an ability perhaps held by the original (possibly non-Solar System based?) Sanedrin. She becomes remote, and after going to an ancient Sanedrin city she steals a Key and heads to a mysterious mid Ocean locale. Dekker follows her, with a pretty Earthwoman named Megan who is something of an expert in Venusian anthropology ... it turns out this Key, in the wrong hands, can lead to disaster, and Issa must face down her temptation to become as a god -- or perhaps yield? It's a decent story, not ever quite believable but interesting, with the Dekker/Megan dynamic serving as a perhaps convenient counterpoint to Dekker's loss of his wife ... By no means a great story, but entertaining.

"Idris' Pig" was my favorite story here. (I wonder if the title is a reference to her pseudonym?) George Baker, a spaceman on the Earth-Mars run, is inveigled into delivering a small object to a man on Mars. But as soon as he hits Mars, he is attacked, knocked out, and rescued by a pretty Martian girl. They end up on a wild adventure, involving Martian religion (and whether or not is should be taken seriously), the title pig, and some pretty bad drugs. And of course a pretty Martian girl! It's purely a romp, and really good fun.

"The Rages" is perhaps the most seriously intended story in the book. It's set in the fairly near future on Earth. Harvey is married to a beautiful woman, Mara, but they never have sex. And Harvey is addicted to the drugs everyone seems to take, which moderate burst of anger ("the Rages") and cause "Euphoria". He is running out, but has a friend who knows how to get more on the black market. Then that friend is taken to a hospital -- he seems to have gone made. Encounters with an older man whose research seems to suggest that the effect of the drugs over time might be deleterious, and an odd young woman who doesn't take the drugs, begin to make Harvey doubt his craving for more drugs ... the message is fairly obvious, and the story really never surprises, but it's nicely executed (St. Clair really was a skillful writer), and it's almost surprising H. L. Gold didn't buy it for Galaxy (not that I know he was offered it, mind you).

"Roberta" is short and effective SF horror, about a man named Robert and an alien named Mr. Dlaga, and a person named Roberta who keeps bothering Robert ... I don't know how well it really plays in today's world, though, because it's pretty drastically transphobic, enough to bother me even while I found its creepy execution entertaining.

Finally, "The Island of the Hands" concerns a man whose wife dies in a plane crash. Unable to accept his loss, he keeps searching for her, finally commissionaing an airplane to take him to the mid-Ocean area she crashed in ... where he and the pilots he hired also crash, becoming marooned on the title island, where he meets a woman who seems a perfected version of his lost wife. I thought the story and its resolution intriguing, and a good try, but somehow it never quite convinced me.

All in all, this is a fine collection of pretty obscure stories. Margaret St. Clair is a name that SF veterans still recall, but for all that her fiction is not well-remembered (except for a few "Idris Seabright" stories) -- and this is evidence that she is worthy of some rediscovery.
Posted by Rich Horton at 9:52 PM