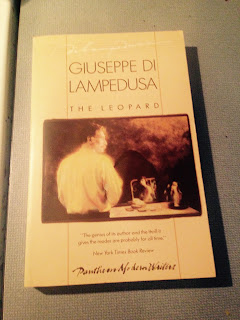 Back to the archives for a review of a book I did a couple of decades ago -- certainly an "Old Bestseller", in its English translation The Leopard was the third bestselling novel in the US in 1960 (the same year To Kill a Mockingbird was 11th). It's by no means a forgotten book, I should add.

Giuseppe di Lampedusa (1896-1957), a descendant of an old Italian aristocratic family, and himself a Prince, and apparently something of a lifelong playboy and dilettante (though perhaps that reputation is questionable), worked on this book, his only novel, for many years prior to his death. He finally finished it in the late '50s, only to see it rejected. (Some have suggested it was rejected for political reasons, and early Marxist reviewers also disparaged the book on political grounds. Later critics have tended to read the book instead.) He died in 1957, and a publisher reconsidered. It was published in 1958, and became a great International success. A well-received movie with Burt Lancaster in the title role was made in 1963.

When I first read I approached it with high expectations, and I was thoroughly satisfied. The novel, apparently based on the life of di Lampedusa's great-grandfather, is the story of a proud, sensual, Sicilian aristocrat at the time of Italy's Risorgimento (1860 or thereabouts), and his reaction to the changes he sees in his society: mainly the inevitable, indeed necessary, but still in some ways regrettable displacement of the aristocracy from their traditional position. The title character is a wonderful creation, and the lesser characters about him (his wife and children, his favorite nephew, the Jesuit priest Father Pirrone, and so on), are also very elegantly depicted. The Sicilian countryside, and telling details of social life at that time period, are also fascinating elements of the book. And finally, the prose is wonderful, and this translation seems very good, save for just a couple mild moments of clunkiness.

(The following paragraphs will summarize some of the action of the novel: I will try to avoid spoilers (and after all this is hardly a plot-driven novel), but the very spoiler-conscious may wish to stop here.)

The Leopard, then, is the story of Don Fabrizio, Prince of Salina, at the time of the main action a man in his forties, with several children. He is a sort of benevolent tyrant in his household, a man of a very old family, accustomed to knowing his place and to having those about him know their places. The Prince is also a man of great sensual appetites, careless with his money (though not wasteful or dissolute), politically knowledgeable but completely apolitical in action, and also an amateur astronomer of some note.

When the story opens, the Risorgimento is ongoing, but it is clear that it will be ultimately successful, and that the Kingdom of the Two Sicilies will be absorbed into the newly unified, somewhat more democratic, Italy. Don Fabrizio, out of loyalty, is nominally supportive of the old regime, but he realistically stays out of the conflict. His favorite nephew, Tancredi, the penniless but charismatic son of his sister, is an ardent supporter of Garibaldi (leader of the revolution).

Several long chapters, separated by months, follow the progress of the Risorgimento at a distance, and more closely follow events which impinge directly on Don Fabrizio's life, yet which reflect the coming societal changes. These include the plebiscite to confirm popular support for the unification of Italy, his nephew Tancredi's love affair and eventual marriage to the daughter of a wealthy but decidedly lower class neighbor, his daughter's reaction to the attentions of a friend of Tancredi's, and Father Pirrone's visit to his home village. Finally, the action jumps forward some decades to the Prince's death, in a very moving and beautiful chapter, then still further forward to the household of his unmarried daughters in their old age.

The events of the story tellingly illustrate both the changing face of society and also the nature of Sicilian society in general. At another level, the Prince's aging and death, and his knowledge of his own mortality, echo the senescence of his class. Loving descriptions of the Prince's homes, of his meals, of balls, of hunting, of peasant life, of politics both at the Prince's level and at the level of the peasants, of the attitude of churchmen towards their flock (especially Father Pirrone's toleration but not approval of his friend's sensual escapades) are laced throughout the novel. Moreover, the Prince himself is a truly compelling, charismatic character, full of faults but an admirable man nonetheless. Also, the narrator's voice is often with us, ironically, often even cynically, commenting on the expectations of the characters and both their failings and the failings of "real life" to meet their expectations, but, though sad, the voice is never bitter.

I am not particularly good at selecting quotes from novels to illustrate their virtues, but I will try to show some of what I found wonderful in this book with this longish, beautiful passage, concerning the courtship of Tancredi (the Prince's nephew) and Angelica: "Those were the best days in the life of Tancredi and Angelica, lives later to be so variegated, so erring, against the inevitable background of sorrows. But that they did not know then; and they were pursuing a future which they deemed more concrete than it turned out to be, made of nothing but smoke and wind. When they were old and uselessly wise their thoughts would go back to those days with insistent regret, they had been days when desire was always present because it was always overcome, when many beds had been offered and refused, when the sensual urge, because restrained, had for one second been sublimated in renunciation, that is into real love. Those days were the preparation for a marriage which , even erotically, was no success; a preparation which, however, was in a way sufficient to itself, exquisite and brief, like those melodies which outlive the forgotten works they belong to and hint in their delicate and veiled gaiety at themes which later in the finished work were to be developed without skill, and fail." I hope this gives a sense of the leisured, luxurious prose, the elegant metaphors, and also the cynical authorial voice which are such great pleasures in this book.
Posted by Rich Horton at 4:09 AM